INTC beat earnings yesterday and this morning the market is loving it. Cramer is wildly bullish. BUY, BUY, BUY!

Unfortunately INTC has a history of marking turning points. Let’s just say that buying the gap up on earnings hasn’t been kind in the short term. Buying when INTC has closed at new 52 week highs the day they report has led to losing trades three days later every time.

The trend is clearly up and I doubt that we are at a final top for this cyclical bull but is the reward really worth the risk of taking Cramers advice?

As of yesterday the market had moved higher 71% of the days out of the February bottom. Folks that is verging on parabolic. Those never end well.

I liken the current market to playing musical chairs with 10 people but only one chair. Certainly you might catch more upside but almost certainly we are, at some point, going to go back down and test the breakout at 1150. 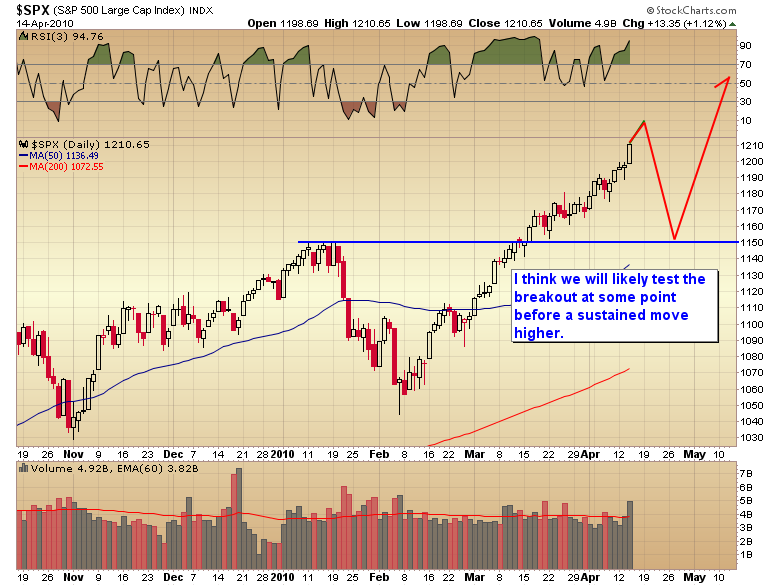 When it happens it’s going to happen quickly. These kind of extreme momentum moves have a tendency to erase several weeks or even months of gains in just a handful of days. So one has to consider is the minimal upside really worth the risk of getting caught in a vicious correction?
At this point one is better off stepping to the side until the correction occurs and then buying back in.
Keep in mind I’m certainly not advocating going short. Because who knows how much longer this could go on. But the potential reward just isn’t worth the risk of pressing the long side anymore.