I’ll start off by saying that I don’t think the recent selloff is going to be an intermediate type decline like we saw in January and February. It’s probably too early. Most intermediate cycles have three daily cycles nested within them. 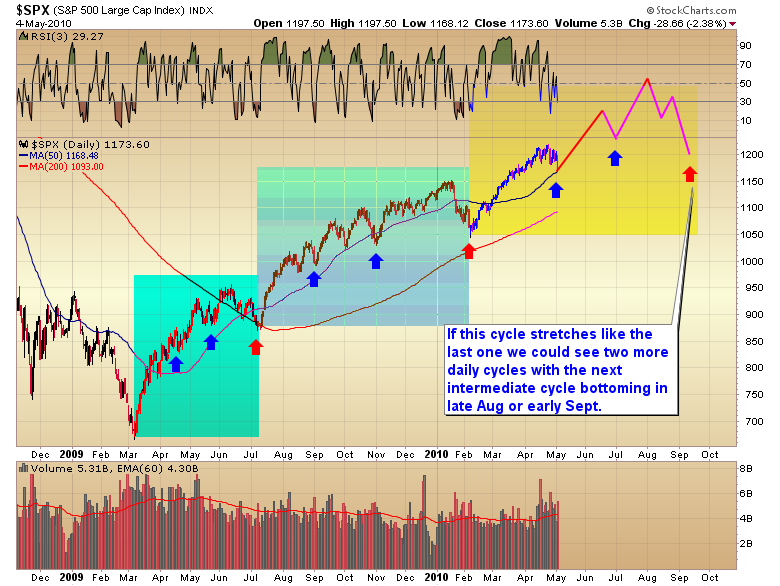 This is only the first daily cycle correction. We should still have at least one more daily cycle yet to go and it’s probably more likely we have two with the next intermediate term decline coming around the end of summer.

Let’s face it the market has only dropped 3.8% so far. Even if it reaches the 1150 support level we would still only be looking at a meager 5.7% decline.

I have to ask is it really worth all the false starts and multiple losses trying to catch a minor short trade in a cyclical bull market? Let’s face it virtually no one is going to sell at the exact top and exit at the exact bottom so the odds aren’t good one would catch even 5%. And if the bull does something to surprise us a profitable short position can evaporate overnight. Hey all it would take would be the Fed extending the TARP program or another round of QE and any correction would be aborted immediately. No, it’s just not worth the big risk of big losses for small returns.

That being said I like the way gold and miners are holding up so far. Neither one has even dropped below the 10 DMA yet.

All four of my conditions  have been met. That means I’m back in “ Old Turkey” mode. The goal is to reach strong hand status again. You don’t achieve that by trying to time every little wiggle.

Now I’m certainly aware that this could be an A-wave topping out and I might have to ride a B-wave down. I’m perfectly willing to do that. Let’s face it in the big scheme of things any B-wave at this stage of the game is just a minor blip. A blip that we won’t even be able to see on the chart by the time the bull is finished.

So if I must I will twiddle my thumbs while I wait for the next C-wave. 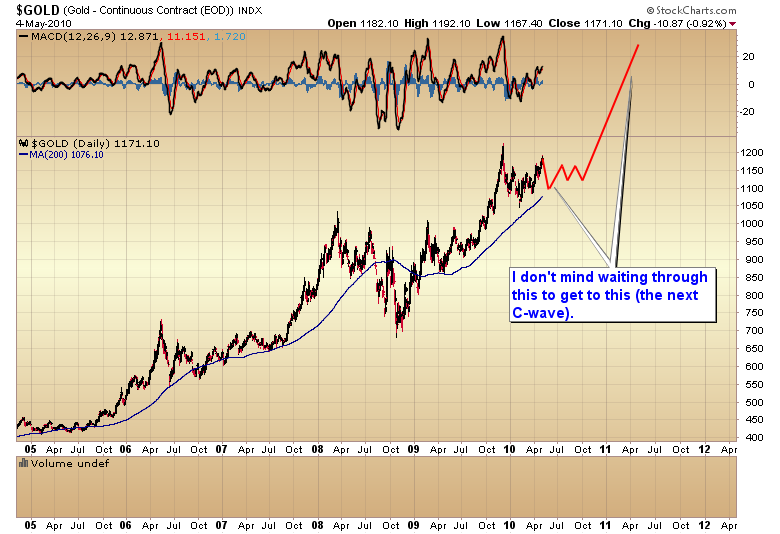 For multiple reasons though, I don’t think this is an A-wave. I think this is still an ongoing C-wave that has one last explosive move higher. On the chance that I’m correct I don’t want to lose my position now.

Hey if I’m wrong the bull will correct my timing mistake anyway.

119 thoughts on “ARE YOU WILLING TO PAY THE PRICE?”