Let me start off by pointing out that we did indeed break below the yearly cycle low yesterday. 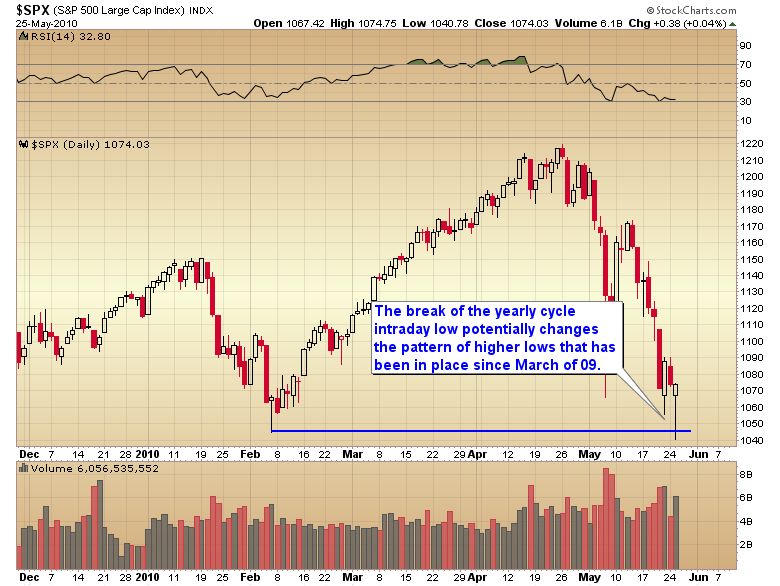 I’ve been saying for a couple of weeks now that a break of 1044 would change the pattern of higher lows. That would be the first warning shot across the bow that the cyclical bull might be in the process of expiring.

Does that mean I want to short stocks? Are you crazy? No way I want to fight with a bear market and the Fed’s printing press. For one Ben has already aborted a left translated 4 year cycle. 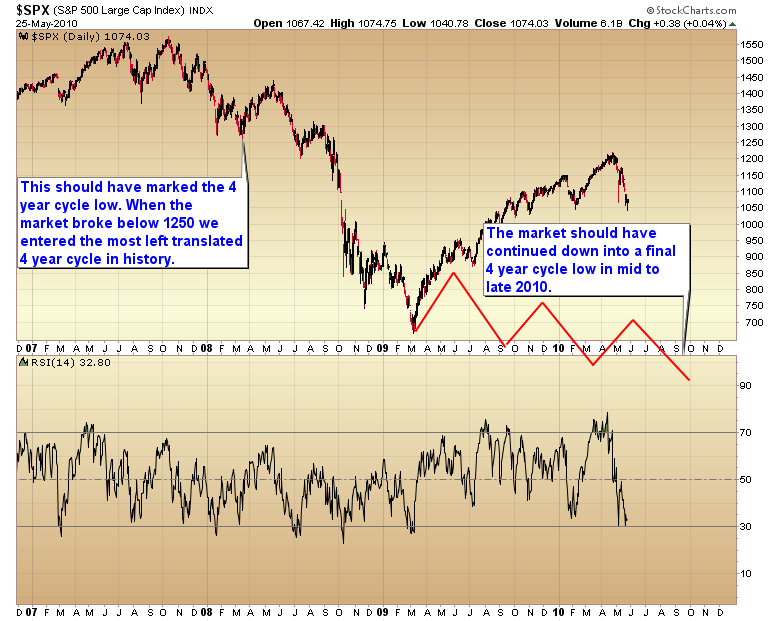 Never in a million years would I have believed that was possible, but happen it did. Print enough money and the Fed could just as easily negate a broken yearly cycle low. And if you think he won’t do it I have some ocean front property here in Las Vegas I’d like to sell ya? Sell short? No way no how. Not even with your money.

Let’s face it the mathematics on the short side are just not conducive to getting rich. It took a year and a half for the market to drop 58% in the second worst bear market in history. Sure one can leverage up but if you happen to get hit with a vicious bear market rally or the rules are changed (ban on short selling) you run the risk of losing everything. Need I remind everyone that leverage is what is bringing down the global financial system. Leverage is like walking through a dynamite factory with an open flame. Sure you might survive but you’re still an idiot.

Trading bear markets is tough to do even if the bear is allowed to run its course undisturbed. But I guarantee the powers that be will throw everything they can at the bear. I just don’t need those kind of odds stacked against me, especially when there is easy money to be had.

Now that I’ve made my position clear (just so there won’t be any misunderstanding later. There will be none of this “hey you said the bear is back and we should short stocks. How come the market went up and I lost all my money”).

I’m emphatically telling you that by selling short you are taking your life into your own hands. If you are bound and determined to fight the Fed, Wall Street, Washington and an angry and tricky bear, you are going to do it all on your own. Leave me out of it. I’m going to be over in the corner picking up gold coins, you can join me if you want to.

Whenever the market doesn’t do what it’s supposed to do it’s probably a good idea to pay attention. Yesterday markets all over the world were down and down hard. Some by over 3%. The futures were signaling a big gap down. By all rights the S&P should have followed the rest of the globe lower today. It didn’t. We ended the day positive.

I’ve been warning for over a week now that sentiment has reached severe bearish extremes. Quite a few sentiment indicators are now at levels lower than the `09 bear market bottom. When these kind of extremes are reached the market runs the risk of running out of sellers. Yesterdays reversal may be a signal of selling exhaustion. When that happens, even in bear markets, we can look for a violent 1 to 3 month short covering rally. (In bull markets we can expect a 3 to 5 month new leg up.)

Lately we are hearing the D word (deflation) thrown around quite a bit. Let’s face it we are going to hear this every time assets start to drop. However let me remind everyone that Ben halted the worst deflationary spiral in 80 years in just a little over 7 months. Ben has clearly proven that a determined government, in a purely fiat monetary system, can reverse deflation. The question isn’t whether or not we are going to experience deflation. The question is simply how long will the powers that be allow it to last before they crank up the presses and flood the world with paper again.

The cold hard reality is that the USA has now gone down the path of no return. We are piling on trillions upon trillions of debt in a futile attempt to spend & stimulate our way out of bankruptcy. I don’t know about you but generally speaking isn’t it counterproductive to go deeper in debt if one is already broke?

This debt can’t possibly be serviced … ever. So we have two choices. One we can eventually just default on our massive mountain of debt. At some point we just throw up our hands and cry uncle. Folks if the United States of America chooses to default on its debt then yes we are going to see a deflationary storm cover the world in ruin and despair.

The second choice is to inflate away the debt by printing trillions and trillions of federal reserve notes out of thin air. This course will buy us some time. It may even briefly appear that we’ve cured our problems (it has seemed that way until recently hasn’t it?). If we choose this path, then unless someone like Volker comes along and forces us to take our medicine, the inflationary spiral will continue until a final hyperinflationary storm destroys the country.

Now each of you has to ask themselves which you think is more likely. Will the US all of a sudden come to its senses, default on its obligations to halt the exponential growth of debt, thus unleashing a deflationary holocaust upon the world…or will we just continue to kick the can down the road like we’ve been doing for the past 10 years, thus making the debt burden bigger and bigger and rendering it serviceable only by hyperinflating the money supply?

How you answer that question will dictate how you want to invest for the next 5-10 years.

If you think like I do that we will continue to kick the can down the road then the easy investment is to just get on board the secular gold bull and hold on.

94 thoughts on “HOW DO YOU ANSWER THE QUESTION?”