We’ve been following the Dow:gold ratio for quite a while. I’ve been saying for years that we will eventually see the ratio move to par by the time this bull is finished. Actually we may even see gold briefly become more expensive than stocks.

You can see from the above chart each swing since the 30’s has been more extreme than the last on both the up and down side.
The extreme undervaluation of gold and overvaluation of stocks in 2000 will probably lead to an even larger swing down as the long term cycle moves back to the opposite extreme. I expect human emotions to work their magic and ultimately we will probably see gold briefly become more expensive than the industrials at a bubble top some time in the future.

At the moment the Dow:gold ratio may be poised for another leg down after the year and a half consolidation. 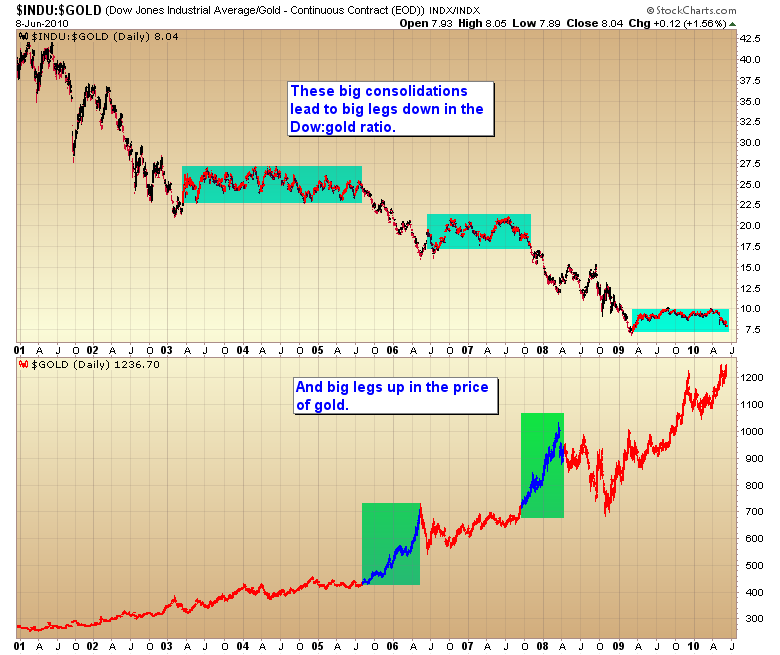 As you can see these big consolidations eventually lead to another leg down in the ratio. Once the consolidation completes we get another repricing of stocks compared to gold. Usually that means a big rally in gold although the last leg down included not only a big move higher in gold but also a drastic downward price adjustment in stocks. By the time stocks finished the bear market leg gold had established a new value zone between $1000 and the old 1980 high of $850. Then for almost a year and a half stocks rallied while gold consolidated that big move, eventually even broadening the range up to $1250.

Now gold is poised for another major leg up while stocks are stuck either in a consolidation of the big rally or maybe even another leg down in the secular bear. Either way, I think once the Dow:gold ratio breaks below the bottom of that range we will be heading into another major repricing of stocks compared to gold.

82 thoughts on “DOW:GOLD RATIO POISED FOR ANOTHER LEG DOWN”