It’s sad to say but I’m afraid 90/95% of all retail traders/investors are not going to successfully ride the gold bull.  The reason of course is that they are deathly afraid of draw downs.  It’s glaringly apparent every time gold pulls back or suffers the slightest correction.  Immediately a slew of traders come on the blog and warn of impending doom.  “Gold is going to $600” (think Elliot wave).   Some are even brave (maybe I should say ‘foolish’) enough to short.  Here is one we hear alot lately, “miners are going to get crushed if the stock market enters a new leg down in the secular bear market”.

Pure nonsense!
Let me show you what happened to gold and miners during the 2000-2003 bear market. 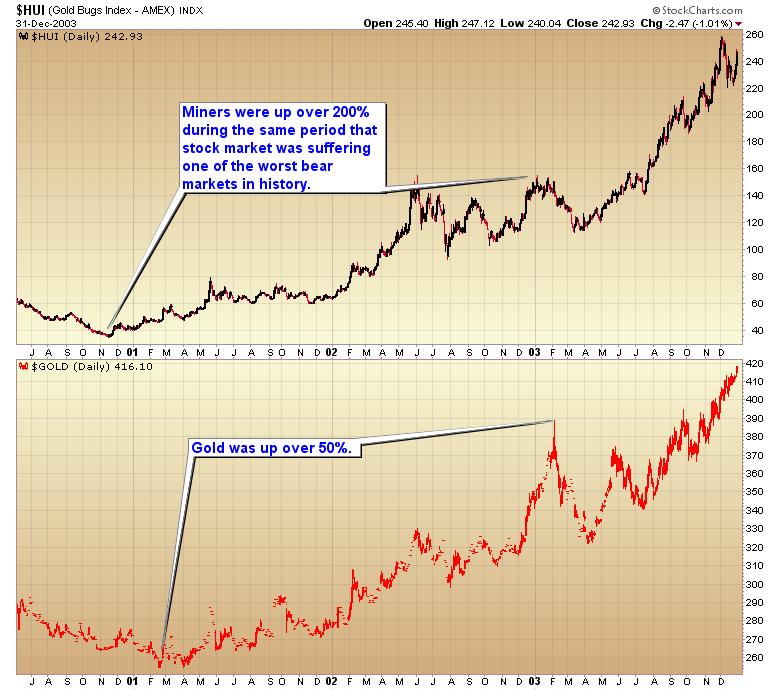 During one of the worst bear markets in history gold rallied over 50% and miners well over 200%.  So this notion that the precious metals sector has to get hit during a bear market is simply ludicrous.
Now I know what you are going to say, “just look at what happened in `08”.
The reality is that the crash in `08 was a very special set of circumstances that aren’t likely to repeat.  Up until September the bear market was following the normal path most bear markets follow.  Slow grinding declines followed by explosive counter trend rallies.  Gold was holding up amazingly well during this period as were miners.  Both were actually up significantly during the first 5 months of the stock market bear.  It wasn’t until gold entered a normal D-wave correction in March of `08 that either corrected at all. 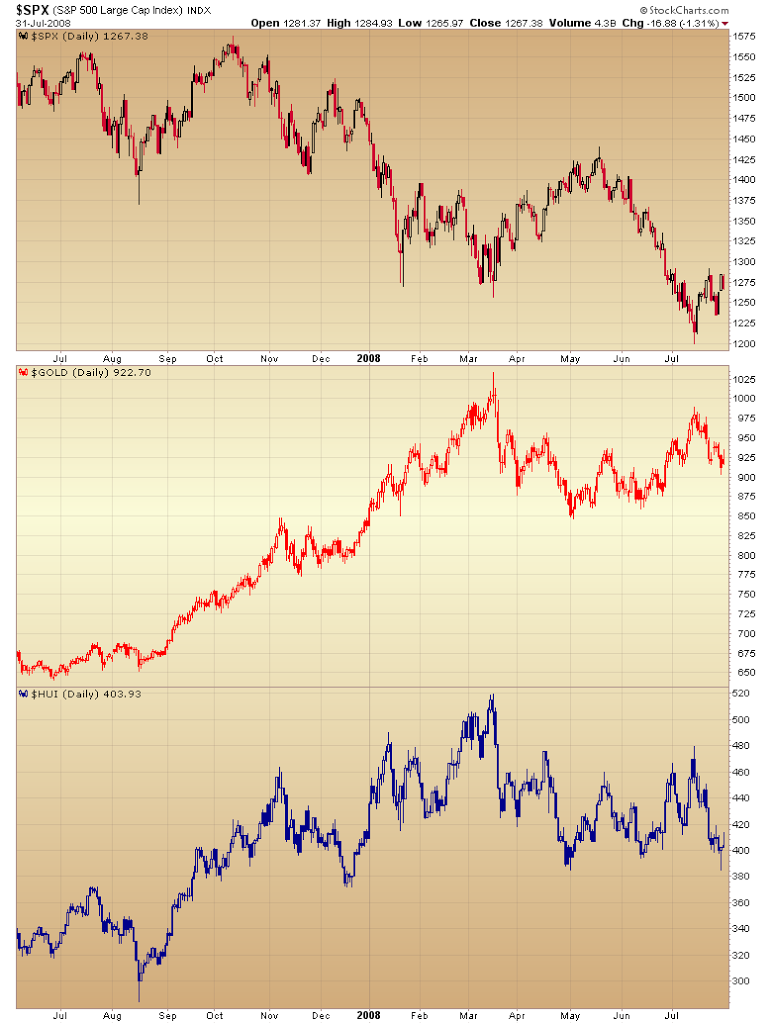 In September a rare event happened that drastically changed the entire fundamental picture of the bear market.  At that time roughly $700 billion in debt came due.  The financial system needed to roll that debt over but couldn’t as the credit bubble was in the process of imploding.  That led to one of the few true stock market crashes in history.
The ensuing panic led to a selling climax in every asset class even including, to some extent, gold.  The actual price of physical gold never even came close to dropping to the levels of the paper market.  Smart money investors were taking advantage of the irrational selling by buying up every single available oz. of physical gold on the market.  At the time premiums on physical were over $100 above the paper price.
The point I’m trying to get across is it took a very special set of circumstances to create the kind of selling climax that could take down the precious metals sector.  Those circumstances are not present today.  The EU has already gone to the printing press to halt their debt problems.  The US has done away with the mark to market rules and Ben stands ready to print so we have no looming debt crisis in our future.
So if we are about to enter another leg down in the secular stock market bear the odds are it will be another slow grinding affair, very similar to the 2000-2003 bear.  There will be plenty of sharp counter trend rallies and one can bank on the Fed throwing more and more trillions of freshly printed dollars at the problem all along the way.
And that my friends is the fundamental bedrock of the gold bull.
Now let me show you a long term chart of the last great secular bull market. 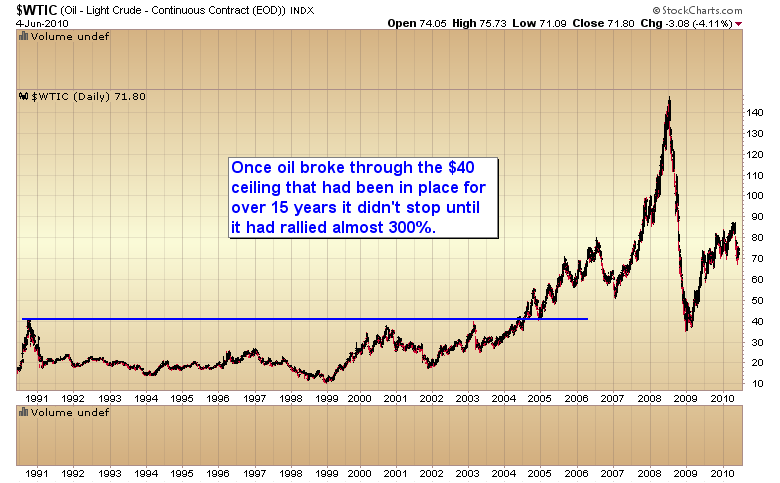 This is just about text book for a big secular bull market.  We see a very extended period of consolidation below a key resistance level.  Eventually that resistance level gets broken.  Once it does it’s like a damn breaking, the force then becomes unstoppable, ultimately reaching heights far beyond what anyone can foresee at the original break out.
In oil’s case the secular bull rallied almost 300% above the $40 breakout level, topping out with a massive parabolic move lasting about a year and a half (remember me saying bubbles tend to last about 1 to 1 1/2 years as the final phase tops out?).
I want to point out this happened in oil, a commodity that was virtually impossible for the average Joe to invest in.  This was a bubble driven purely by the investing community.  Remember this because it’s important.
Now let’s take a look at the next secular bull, one that’s still in the baby stage. 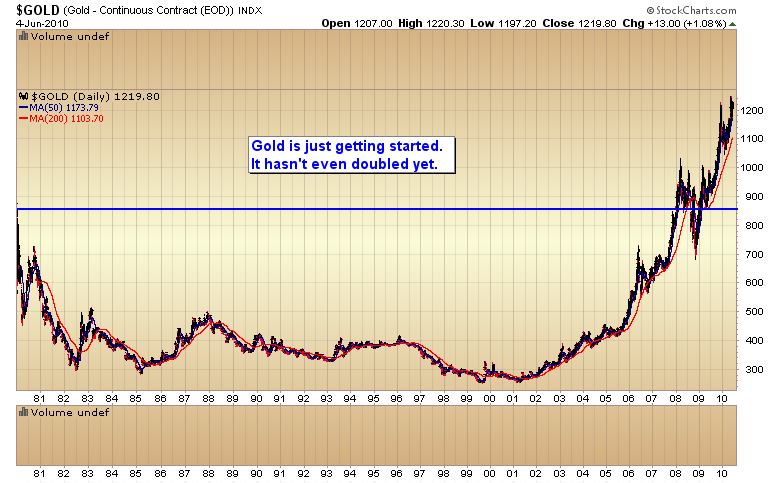 Gold has just recently broken out above the old 1980 high of $850. It hasn’t even doubled yet much less rallied 300%.  Now if you think gold rallying to $3500 is ridiculous you are absolutely correct. There is no way gold is going to stop at a mere 300%.
Unlike oil, gold is readily available to the public and ultimately that is what drives the final stages of a secular bull market/bubble. When the public comes into the market their panic buying drives the final parabolic move to unbelievable heights.  We saw perfect examples with both the tech and housing bubbles.  The public was deeply involved in both.
And now, for the topping on the cake. The precious metals markets are infinitely smaller than the stock market, real estate markets or energy market. That means it won’t take anywhere near as much money to drive these markets to incredible heights.
Look at that chart of oil again. A 300% gain in a very large liquid market without ever drawing in any perceptible buying from the general public.
Now look at that chart of gold again, only this time with fresh eyes. The possibilities are simply staggering.  I wasn’t kidding when I said this will be the greatest bull market any of us will ever see in our lifetime.
If, and this is a big if, you can ignore the nonsense from the Nervous Nellies or the gold Bears (a breed destined for extinction) and just hold on to your positions you will ultimately reap unimaginable rewards as this bull progresses.
Now I will say that yes, there are times to take profits in bull markets.  You take profits when gold and miners are stretched far above the 200 day moving average.  Everything eventually regresses to the mean.  So when we see the HUI 40-55% above the 200 DMA then yes, you should think about selling at least some portion of your positions.  But to sell positions with the miners 3% above the 200 DMA is … well, it’s just plain dumb. This isn’t the time to sell it’s time to buy, buy, buy.
Let me say this as plain as possible.  If you want to get rich from this, the largest bull market you are ever going to see, you don’t listen to the traders and you certainly don’t adopt their flawed strategies.  You simply can’t think like that if you want to ride this bull.  You need to think like a value investor.  When you see value you scoop it up no questions asked. And if the market is foolish enough to give you an even better bargain down the road you buy more.
Unfortunately here is what happens. Retail investors are unable to buy value. For the average retail investor to buy he needs emotional confirmation. I see this all the time. “Wait till the breakout for confirmation before buying.” The problem with that approach is that most breakouts soon fail. If one waited for the recent breakout above $1225 to buy they then had to weather an immediate draw down.
I saw this in spades at the December top. Retail traders entered in droves during that time. They were getting the emotional confirmation they needed. Then when gold corrected they either got knocked out for a loss or they held on just long enough to get out even. Most simply don’t have the patience to ride the bull on his terms. They want the bull to do what they want, when they want. I suspect more investors have been lost to boredom that draw downs.
The best strategy right now is to just sit tight. Remember this is still just a baby bull and it has a long long way to go yet.