Just like the stock market, gold runs in cycles (all markets do because the humans that trade these markets go through periods of optimism and periods of pessimism).

For the purposes of this discussion we will concentrate on the intermediate and daily cycle, after a quick explanation of the two larger degree cycles.

At this point all one needs to know is that gold’s 8 year cycle bottomed in `08 and isn’t due to bottom again until 2016. 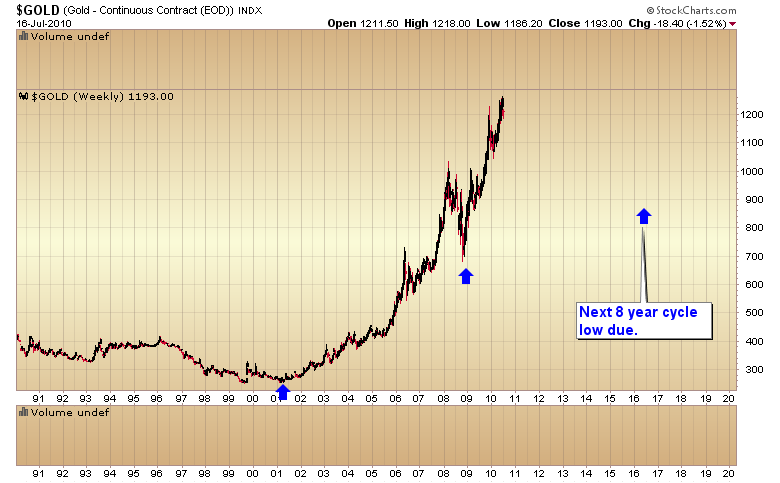 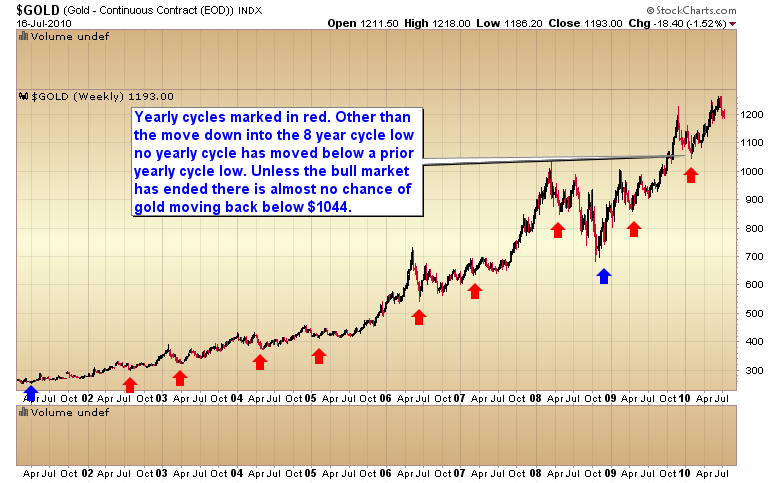 That means in order for gold to move below $1044 we would have to entertain the fact that the current 8 year cycle has already topped in only two years. That would also mean the secular bull has likely topped.

I just don’t buy that, as no secular bull in history has ever topped before reaching the bubble stage and gold is clearly a long way from that. So all this nonsense about gold falling back below $1000 is just that – nonsense. The odds of a move back to $1000 anytime during the remainder of this bull market are probably less than 1%. I don’t know about you, but I make it a rule to never bet on something with odds of success at only 1%.

Now let’s move in and take a look at the next larger cycle, the intermediate cycle. This cycle has averaged 18 weeks since the secular bull began in 2001, but has lengthened to 23 weeks after the global debt problems began in `07. 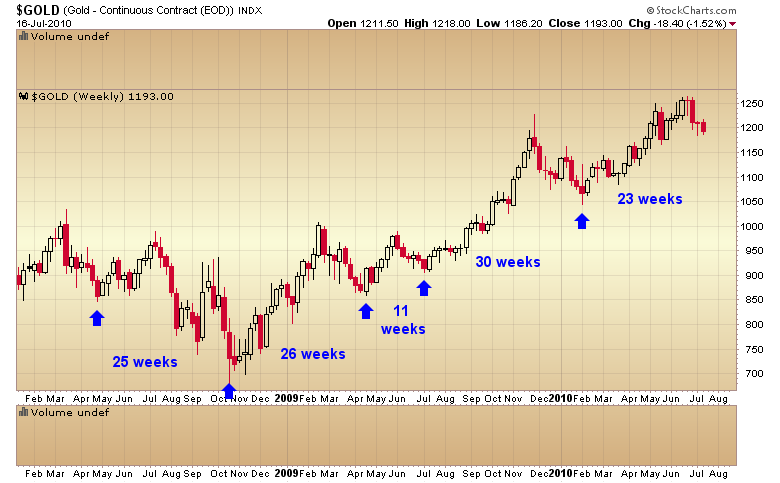 My guess is that the Fed’s extreme monetary policy is acting to stretch golds intermediate cycle slightly. As you can see from the chart, gold is now about to enter the 24th week of the current intermediate cycle. This of course means it’s becoming extremely dangerous to sell gold. On the contrary, this is the time where savvy investors want to be looking to add to positions. Remember, this is a secular bull market after all, and you only get this kind of opportunity about every 5 to 6 months.

You certainly don’t want to blow it now as you will have to wait another half year before it comes again, and since this is a bull market the next opportunity is going to come at higher prices. For all you traders who claim that you are going to back up the truck when gold experiences a pullback, well you are getting your pullback right now. The question is, will you follow your own advice?

Now let’s look at the smaller daily cycle and see if we can pinpoint a closer time frame for when we should be looking for the final bottom of this intermediate cycle. 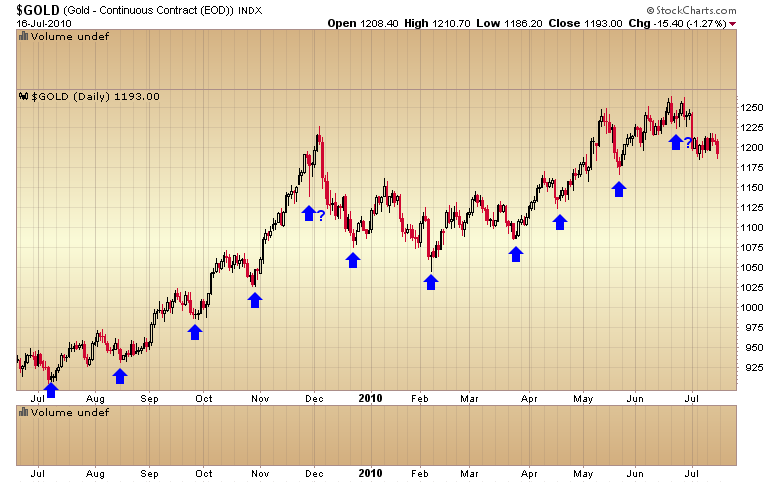 On average the daily cycle tends to run about 20 days. However, it’s not completely out of the question to see a cycle run as long as 30 days occasionally.

I will also note that we usually see a failed daily cycle as gold moves into a final intermediate cycle low. With that in mind here is where I think we are in the current daily cycle which, by the way, does appear to be a failed and left translated cycle as it was unable to break to new highs. 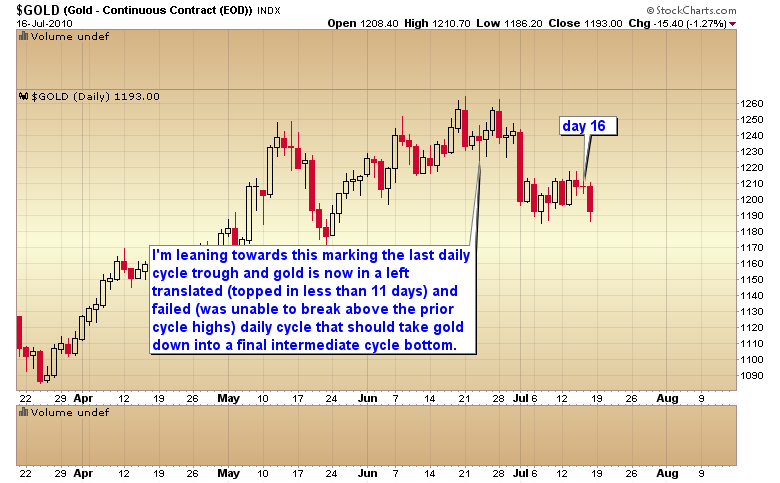 It appears we are now on day 16 of this cycle. Since we know that the average duration trough to trough for a daily cycle is 20-30 days, we can extrapolate a reasonable timing band for a final bottom somewhere in the next one to two weeks.

Here’s what to look for. First off, I think gold will need to retrace at least 50% of the intermediate rally. That would come in around $1155. 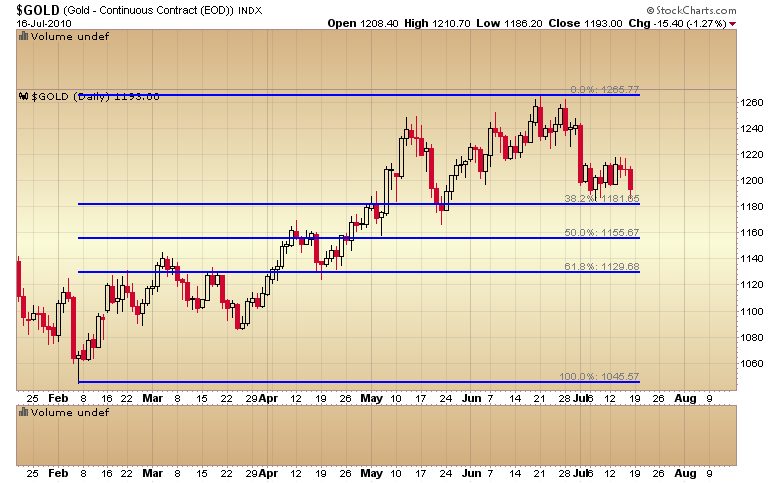 Next, I would like to see sentiment turn extremely bearish. We are already well on our way to that happening as public sentiment is now nearing the same levels we saw at the February intermediate cycle bottom.

Another big clue will be to watch the comments on the blog. At intermediate cycle bottoms troll infestation will become intense with comments reaching upwards of 200-300 per post. That is always a fool proof sign that gold is about to slam down on the shorts. Hey, this is a secular bull market after all, what could you possibly be thinking trying to short gold?

About this time we will see the conspiracy theorists start blaming a mysterious gold cartel for what in reality is just a normal correction within an ongoing bull market, and one that happens like clockwork about every 20 weeks.

So the bottom line is we are on the verge of getting one of the best buying opportunities we ever get in a bull market sometime in the next week or two. The question you have to ask yourself is, will you take it or will you let the “technicals” talk you into missing another fleeting chance to accumulate at bargain prices in the only secular bull market left? Let’s face it, at intermediate cycle bottoms the technicals are not going to look like a bottom.  Instead, they are going to look like the bull is broken.

Only those people who can think like a value investor and keep the big picture firmly in mind are able to buy into an intermediate cycle bottom. You have to make a decision. Are you going to seize the opportunity or are you going to let the bull trick you into losing your position?