In my last post I briefly explained the mechanics of the gold cycles. Tonight I’m going to do the same thing for the dollar.

Like I did with gold I’ll start with the largest cycle, in the dollars case it is the 3 year cycle. 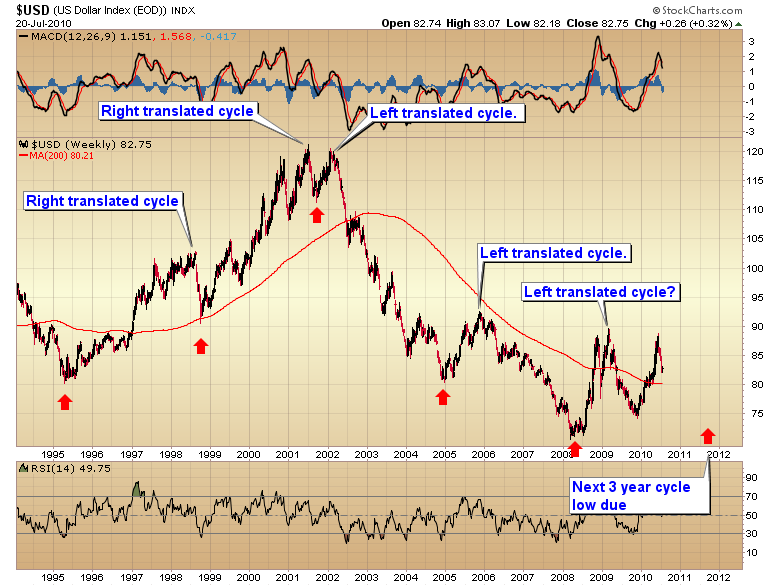 Before I go any further I should probably explain the concept of left and right translated cycles, as it is pertinent to the current situation we find ourselves in.

Why do we care whether a cycle is left or right translated you ask? Well because how a cycle tops will tell us more times than not whether we are in a bear trend or bull trend.

Cycles that top as left translated cycles are the hallmark of bear markets and more often than not the cycle trough, when it comes, will move below the prior trough. The opposite is true for right translated cycles.

You can see that from `95 till 2001 the dollar was in a secular bull trend. Each one of those cycles topped as extreme right translated cycles and consequently each three year cycle low bottomed well above the previous three year low.

Now despite all the bullish talk about the dollar this cycle is also playing out as an extremely left translated cycle which means the odds are high it too will move below the previous cycle low.

Unless the dollar recovers quickly and exceeds the high at 90 it will be in jeopardy of breaking to new lows by next year.

I’ve said this for some time now that the market is eventually going to make Bernanke pay a terrible price for his insane monetary policy. In the real world, a world where magic doesn’t work, and Santa Claus and the tooth fairy aren’t real, it’s not possible to print literally trillions of dollars out of thin air and not have something bad happen to your currency.

I’m sorry folks but the world just doesn’t work that way. If it did we could just print and print till there wasn’t a tree left standing and the value of the dollar would just go up and up.

The bottom line is that the dollar is approaching the timing band for that move down into the three year cycle low, and unless something changes quick it is in jeopardy of crashing to new lows during that move. And when a currency crashes it is an extremely inflationary event.

Next let’s move down to the smaller intermediate cycle. 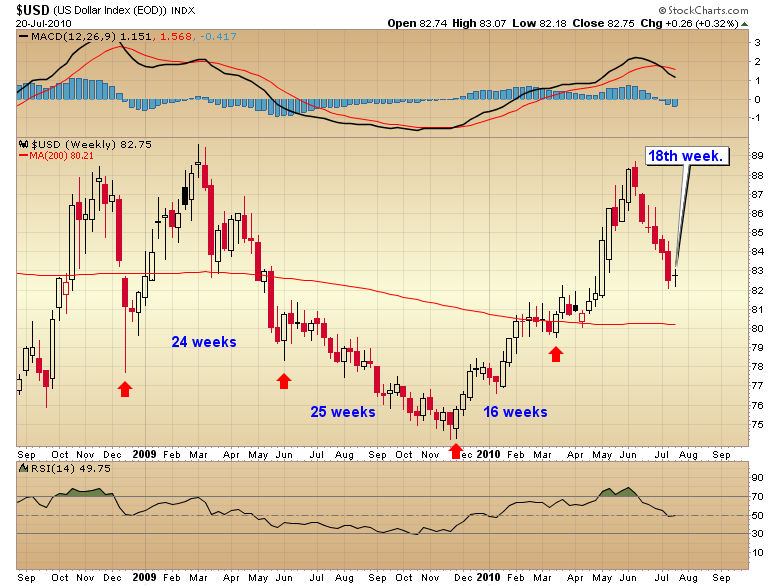 Like gold this cycle tends to last about 20 weeks most of the time. However when Ben cranks the printing presses up it tends to stretch the cycle. You can see that both intermediate cycles during the period of quantitative easing stretched rather long and the second  was also extremely left translated.
Now however we have a right translated cycle and one that is moving into the timing band for an intermediate bottom. Since it is right translated the odds are it should hold above the prior cycle low which came in around 79.50.
Now here is the problem and it has to do with the daily cycle. 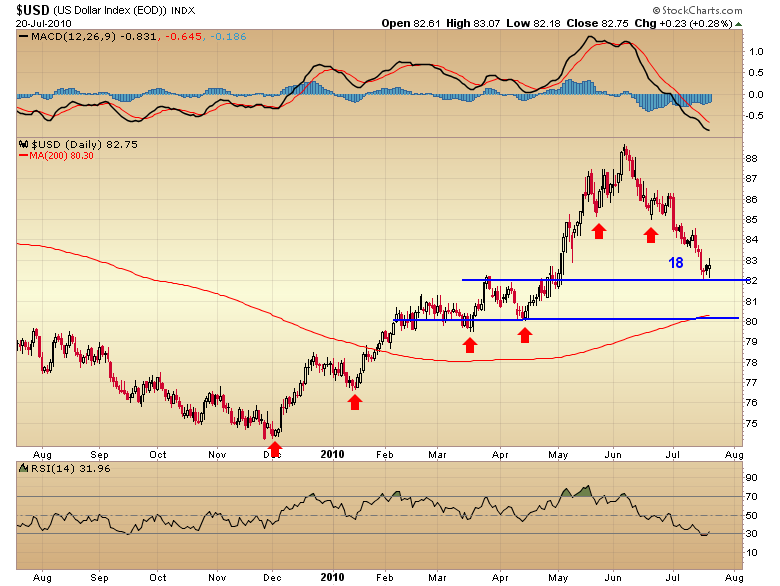 The daily cycle on average lasts about 20-30 days. The recent low is just slightly in the timing band for that low. If this turns out to be the cycle low (and we will have to wait a bit before we can make that determination) then the dollar needs to put in an intermediate bottom right here right now also. If the dollar rolls over and another left translated daily cycle begins it will almost surely break through not only the 82 pivot but the long term support level at 80.

If that happens then the odds are going to be high that the decline into the three year cycle low has its hooks into the dollar and we will indeed see the dollar move to new all time lows by next year. If that scenario unfolds it will unleash severe inflationary pressures.

I tend to think the recent divergence by virtually the entire commodity sector is already giving us a warning that the market may be ready to exact it’s toll for the Fed meddling. 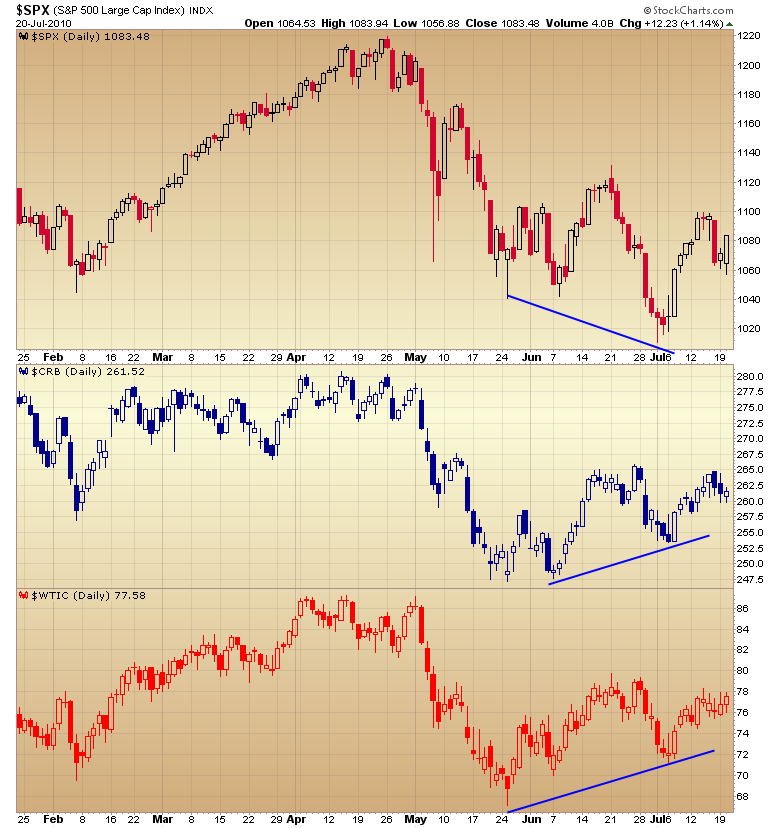 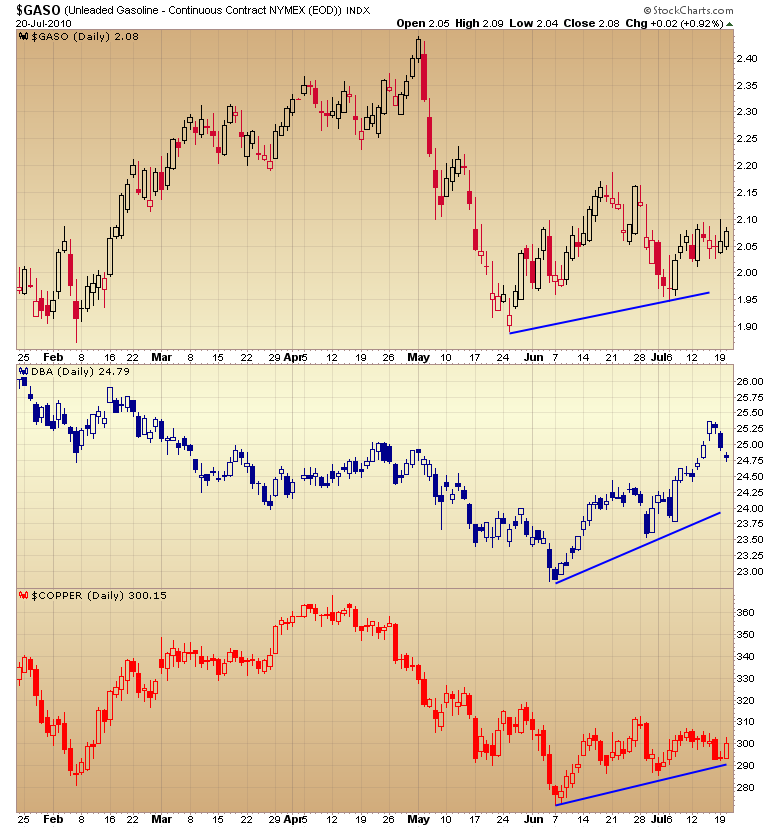 We’ve already seen a mini-crisis in the Euro. It’s only a matter of time until the cancer spreads to the worlds reserve currency, and our time may be up.

Chart of total debt to GDP. This is about a year old so it’s actually a bit higher now. Those who think debt is contracting are sorely mistaken. The government has just taken over where the consumer has left off. 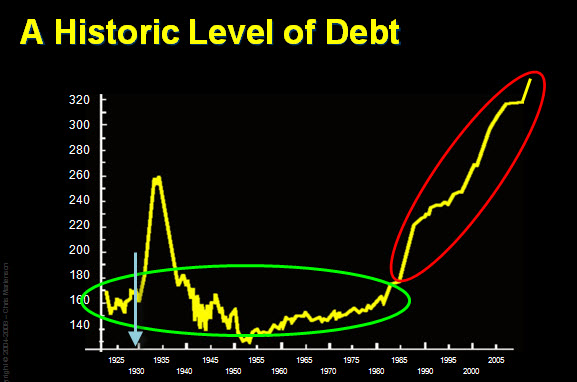