The current decline has now lasted longer than even the longest leg down in the last bear market. The longer this goes the closer we get to a significant rally. 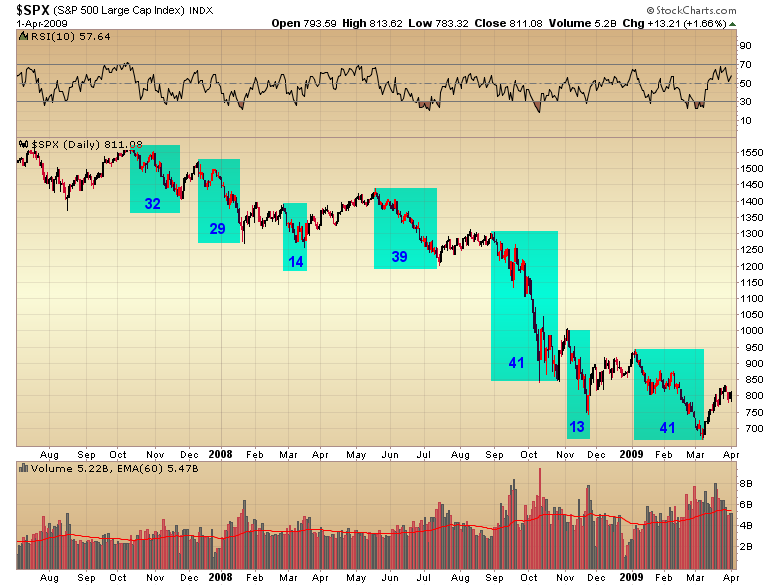 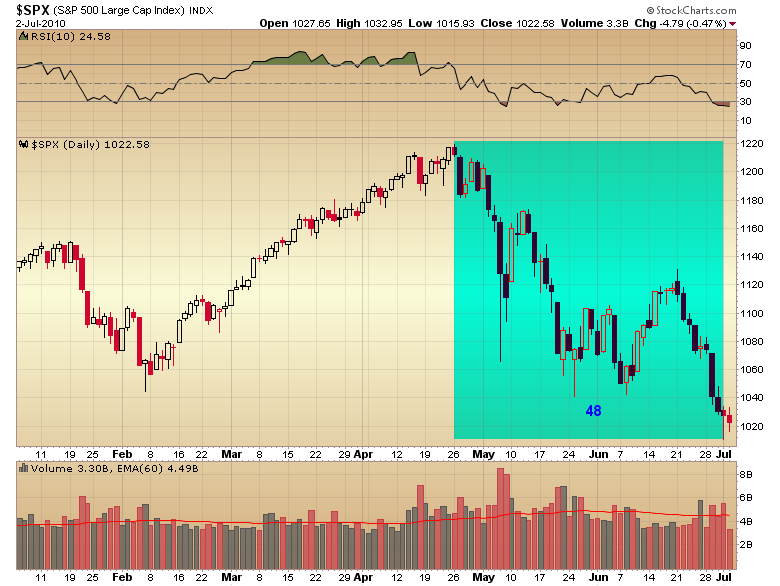 As you can see this decline is now 7 days older than any decline during the last bear market. I’ll say again that bears hoping the head & shoulders pattern will drop straight down to 850 are probably going to get caught in an explosive intermediate degree rally.
It just doesn’t make sense to continue pressing the short side at this point. It’s safer to wait for a rally and then sell into it when it looks like it has topped.
We’ve already had two intra-day reversals. There is a good chance this correction (bull market) or leg down (bear market) has reached  exhaustion. At the very least one should tighten up stops so they don’t lose whatever gains they might have.
Although any little piece of good news or “surprise” Fed announcement pre-market could send the market rocketing right through stops trapping shorts in a losing position.
That is the risk one takes playing the short side. The powers that be are going to do everything they can to halt the bear and hurt the shorts. I think we can count on at least one more round of QE if not more. Bans on short selling are surely coming again and I wouldn’t put it past the government to massage the economic data even more than they already do to paint a better than reality picture.
Before this is all over I even expect Ben to start dropping dollars from his helicopter although they will call it rebate checks again. Whatever it takes, Bernanke is not going to allow deflation.
He already halted the most severe deflationary spiral since the depression in less than a year and aborted a left translated 4 year cycle with his printing press. That has never been done before.
I don’t know about you, but I have no desire to go up against that kind of firepower.
And if that isn’t enough to convince you the NY times had a feature article by Chicken Little, the sky is falling, end of the world himself Bob Precther.
If sentiment has gotten so bad that the NY Times is giving interviews to Bob Prechter is must be time to back up the truck on the long side.
(no thanks I’ll just stick with my miners)

33 thoughts on “LONG EVEN FOR A BEAR”