Well the last post was fun …but I think it’s time to move on to something else.

Something significant did happen today. The dollar broke through the 82 support zone. This is the first condition of three that will tell us if the almighty dollar is now caught in the clutches of the 3 year cycle decline.

The other two are a break below 80 and the next intermediate cycle must turn out to be a left translated and failed cycle.

But let’s start with the current daily action. First off a little cycle information. “Most” daily cycles (for the dollar) tend to run about 20 days but can stretch up to 30 and not be abnormally long. Also note that most left translated cycles tend to drop below the previous cycle bottom. A left translated daily cycle is one that tops in 10 days or less.

Here is a 7 month chart of daily cycles. I’ve marked the troughs with a blue arrow and noted the length. If the cycle was left translated I marked it with an L. 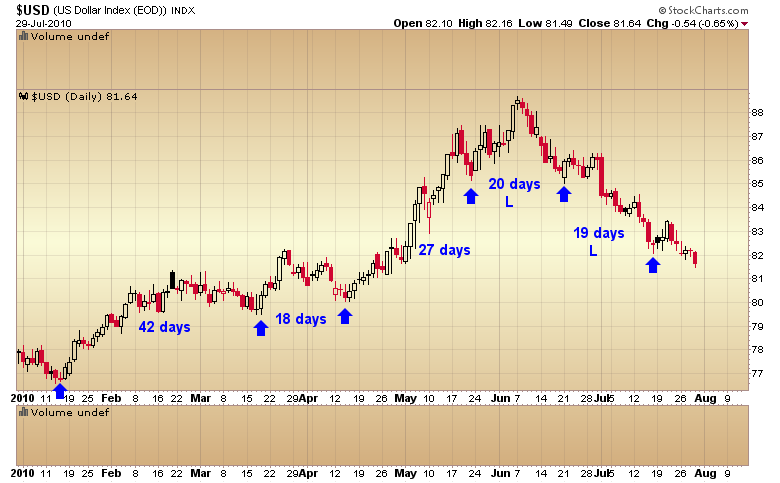 As you can see the last three cycles have all been left translated and they all bottomed below the prior cycle bottom.

The last cycle, and it now appears the current cycle, were and are extremely left translated. Those tend to produce the worst declines. The break of 82 today not only meets my first warning sign that the dollar is now in the grip of the 3rd year cycle low, it also puts the odds heavily in favor of July 16th marking the last daily cycle bottom.

The reason that is important is because the cycle is only on day 9. There should still be 2 to 3 weeks left before the next major bottom.

One of the conditions necessary for the stock market to continue rallying is for the dollar to continue falling. Today’s action is a big check mark in the continuation theory.

As you can see each one of the major impulsive moves down in the dollar sparked powerful rallies in stocks. 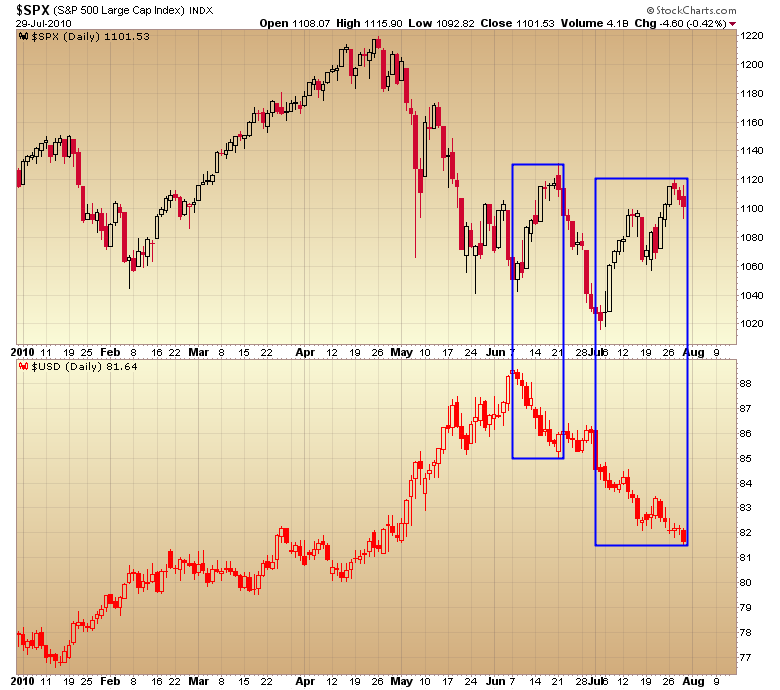 As we still have at least a couple for weeks before the next major bottom we should see the stock market rally at least another 2 to 3 weeks. That is going to force the current daily cycle for stocks into a right translated cycle. As I said before those tend to hold above the prior cycle bottom. 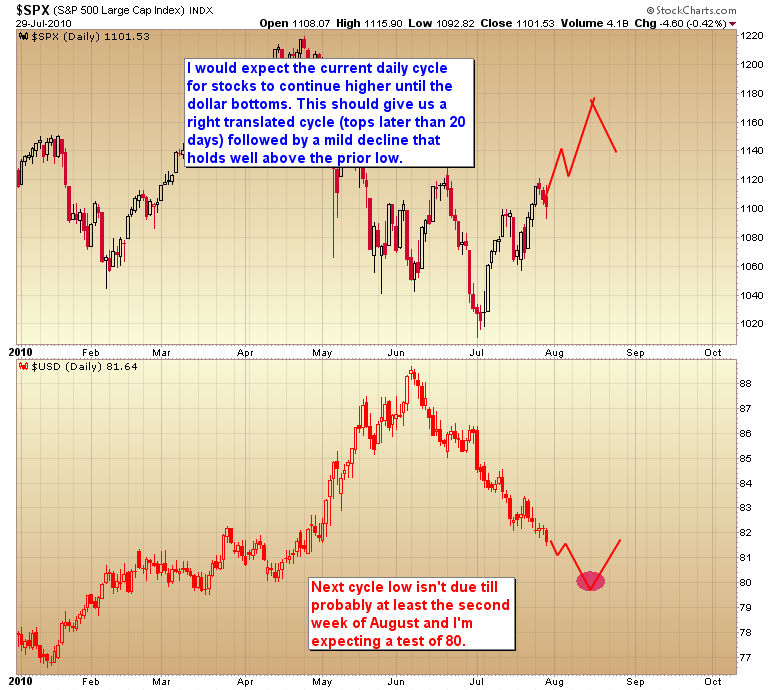 Keep in mind I’m just guessing on levels. I’m just illustrating general trajectories and time frames not actual targets.
At that point the dollar will be ready to put in a major intermediate cycle low and we should see a more substantial rally. If that rally fails and moves below the August bottom then we can close the book on the dollar. At that point there will be virtually no question that the 3 year cycle low has its hooks in the dollar and off we will go.
This should spark extreme inflationary pressures and as I’ve pointed out before every C-wave in gold has been driven by a major leg down in the dollar. I have no doubt the current C-wave will be driven by the dollar falling (maybe crashing) into the major 3 year cycle low. 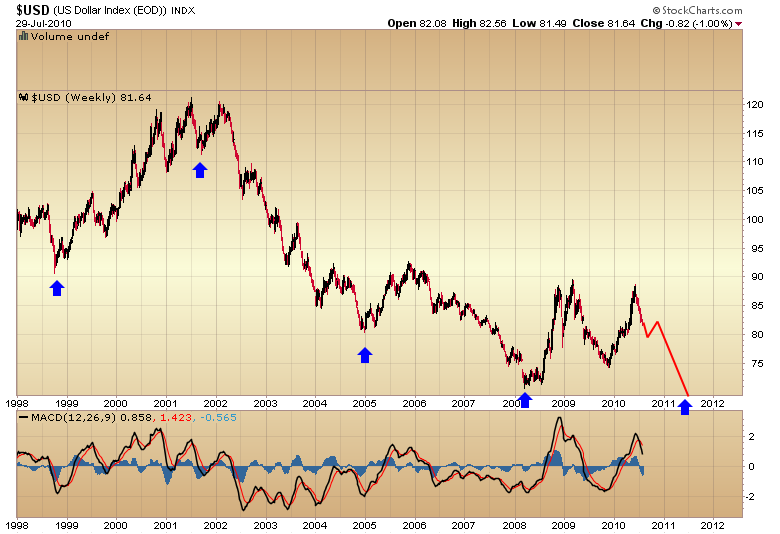 I’ve said many times that Bernanke is going to pay a price for his insane monetary policy. In the world we live in one just doesn’t get away scott free after printing trillions of dollars.
Heck Greenspan didn’t get away with printing billions after the tech bubble burst. The end result was a housing & credit bubble that ultimately burst and sent the world into the second worst recession since the Great Depression. Does anyone seriously think Bernanke can one up Greenspan by many, many multiples and not have anything bad happen?
I can assure you that you are dreaming if you think the market is just going to “let this one slide”.
There are going to be extreme unintended consequences and I’m about 99% sure they are going to come at the dollar’s 3 year cycle bottom next year.