Everyone is fixated on the stock market or the gold market. Meanwhile the real story is unfolding right under every one’s nose in the currency markets.

Today the dollar broke down violently from the recent crawling pattern that has been forming along the 50 DMA. When these patterns break down they tend to move aggressively, usually down to at least the 200 DMA . 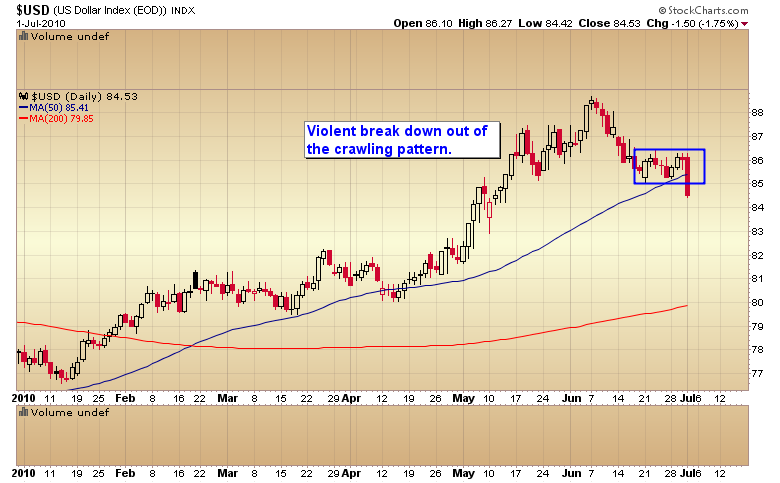 I’m not at all sure the dollar will stop at the 200 DMA though and here’s why.

We’ve already seen a mini-crisis in the Euro. We know the Fed printed trillions of dollars during the period of QE. You simply can’t debase a currency that way and not have repercussions.

I suspect we are about to see the crisis that started in the Euro spill into the dollar. (This is how currency problems unfold they tend to spread like a cancer into other currencies.)

Don’t forget we have a major three year cycle low coming due next year in the dollar. Just on a cyclical basis the dollar is due to start moving down into that low. But we definitely have a fundamental driver for the move in the Fed’s insane monetary policy. Trust me Bernanke isn’t going to get off scott free from his printing spree. The market is going to make him pay a terrible price for his foolishness.

That price may be about to come due.

Needless to say once the cancer spreads into the dollar it is going to power the next leg of the ongoing C-wave in gold.

Now isn’t the time to let emotions control you, the correction in gold could end at any time. If you aren’t on board you will quickly find yourself chasing an overbought market.

15 thoughts on “WATCHING THE WRONG MARKETS”