I’m getting flooded with emails wanting to know if I think the bear is back. Let me repeat again my three requirements.

1. Stocks have to move below a yearly cycle low. They did that in July. So this one is a check mark for the bears.

3. We must get a Dow Theory sell signal. In order for that to happen both the industrials and transports must close below the July low. That clearly hasn’t happened yet. 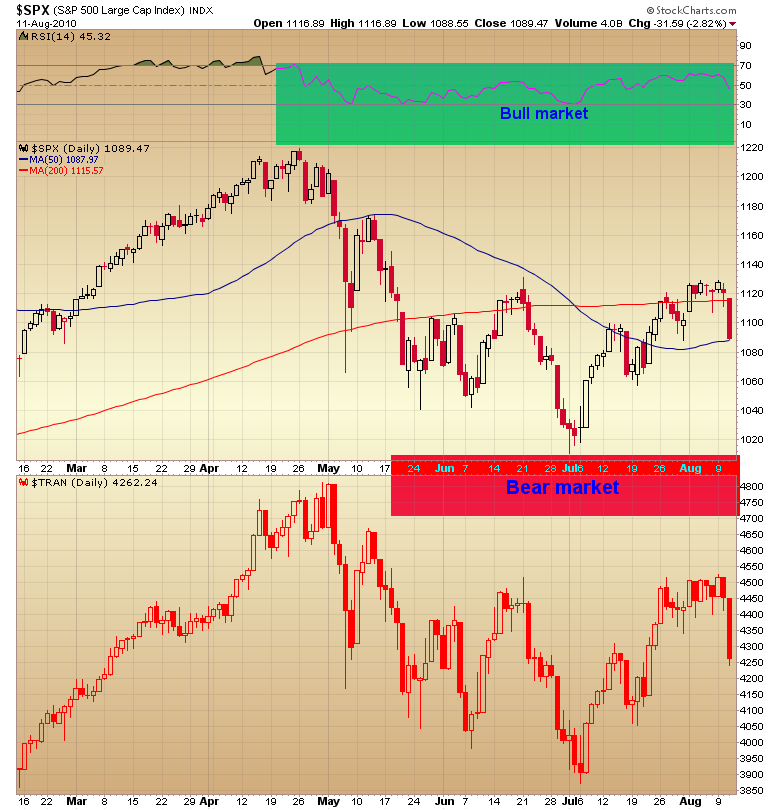 Until that happens we are stuck with only half the conditions and the market remains in no-mans land between those two lines in the sand.
If the red line gets crossed by both the Dow and the trannies I will have no problem calling the bear. But until it does there is simply no need to second guess what the market is going to do before it happens.
The mathematics of the short side don’t require one to catch the top of rallies in order to make money.
Just as an example selling short at the recent top (1120) and covering at 600 (I’m assuming a bear market) would garner one 46%.
However a more cautious trader could wait for the signal that the bear has returned and sell short at 1000, cover at 600 and still make 40%. Is 6% really worth the gamble that you might be early to the trade? No of course it’s not. A sophisticated trader understands this and waits for proper confirmation before he goes all in on a bear market.
I think we are probably headed into the daily cycle low. If the coil plays out true to the stats then we will get that bottom in the next 1-4 days.
If however the dollar has put in an intermediate cycle bottom then we would probably not see a final bottom for 2 to 3 weeks (the daily cycle usually runs between 28-40 days give or take a few in either direction).
Since today was the 28th day stocks are actually now in the timing band for that low. It just remains to be seen whether the cycle will bottom early in the cycle as the coil suggests or later in the cycle as is typical of most cycles.