We’ve had quite the debate lately as to whether bonds are in a bubble or not. I actually think they were in a bubble, but the bubble has already popped.

First off know that bond cycles tend to be very long and reverse very slowly. So we aren’t going to see bonds just collapse like a stock market crash and all of a sudden we have interest rates pushing 15%. That just doesn’t happen in the bond market.

Know also that 25 to 30 years is about as long as a bond cycle ever lasts.

Now take a look at the following charts. 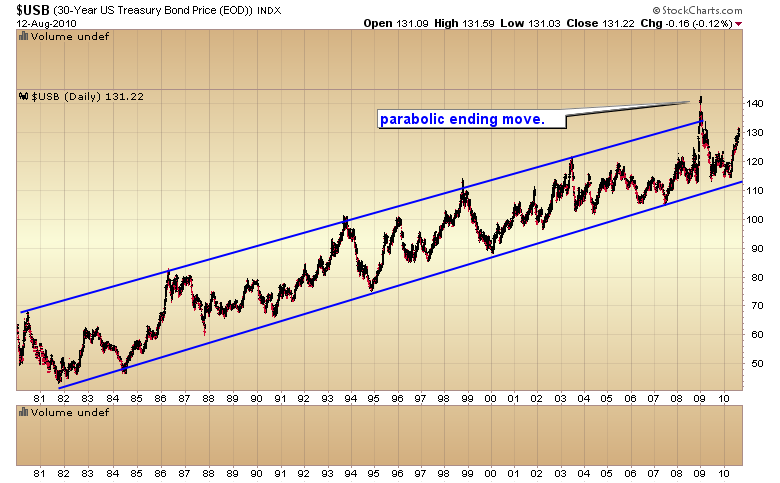 That is a 29 year bull market, complete with a final parabolic move out of the trading range on the Fed’s ill fated attempt to artificially control long term rates.
I have news for you, when ever the government tells you it is going to force the market to do something you can pretty much get on the other side of that trade with virtual impunity. (Remember what happened when the SEC banned short selling in financials) Markets are just too big for anyone to change a secular trend. Any attempt to do so will just hasten what would have happened anyway.
As you can see Bernanke did just that. The Fed’s attempt to control long term rates just accelerated the final move resulting in the bond market immediately reversing and now even after a year and a half interest rates are still 140 basis points above the “Bernanke bottom”.

I believe the recent rally over the last few months is the initial echo rally (a bear market rally) that will top and roll over before making new highs.

Ask yourself, would you lend money at 4% for 30 years to a country that is actively trying to debase it’s currency and is so deeply in debt that we will never be able to pay that debt off without even further currency debasement? Don’t forget you would be buying into a market that has been in a steady uptrend for 30 years.

Of course you wouldn’t.

I know there are plenty of analysts that will argue for the continuation of a 30 year bull, but then those same people expected the tech bubble to continue for eternity and these are the same analysts who had convinced themselves that there was a shortage of real estate in `05 & `06. At secular bull market tops the masses will always be able to manufacture nonsense reasons for why the bull will continue indefinitely. At secular bull market tops common sense gets thrown out the window.

Human nature never changes. I can also guarantee that the top of the gold bull will be no different. If you think bond bulls, real estate bulls or tech bulls were ridiculous I can assure you they won’t hold a candle to the absolute insanity that will reign among gold bugs when the secular gold bull tops.

After taking a quick look at the long term bond chart it appears bonds have a major cycle low about every 2-2 1/2 years. They just did put in that cycle low this year. 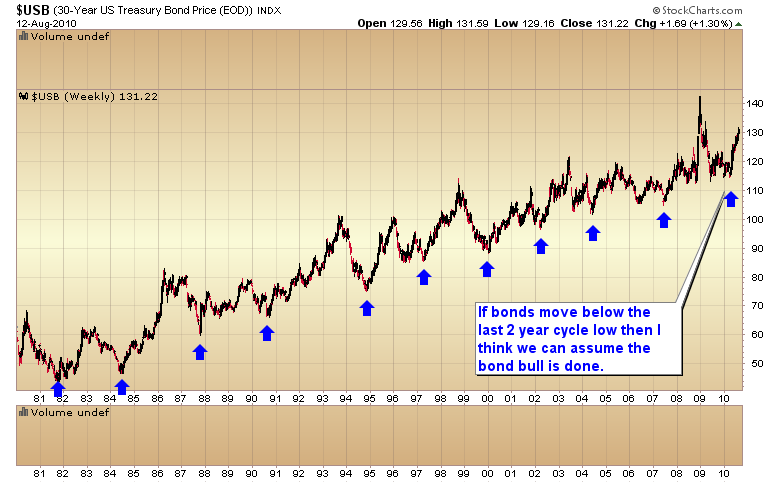 You can see from this chart that every 2 year cycle has bottomed above the last. If this was to change it would break the pattern of higher highs and higher lows.

So we have a simple cyclical sign to watch for. If bonds are unable to move to new highs during this cycle and if they move below the spring low then we will have confirmation that the secular bull market in bonds has expired.