In February I warned the bears that the market was just putting in a profit taking correction and that we would see another leg up in the bull. They didn’t listen.

In late June I warned that the daily and intermediate cycle were deep in the timing band for a bottom and overzealous bears risked getting caught in a powerful rally. They didn’t listen again and they got caught in an 11% rally.

In July I warned the gold bears that this correction was just a normal intermediate cycle pullback. One that happens like clockwork every 5 to 6 months. Again they didn’t listen. Gold  proceeded to rally 15 out of the next 17 days.

So here we go again. The stock market is now on day 37 (average length 35 -45 days) of it’s daily cycle. Sentiment is again at bearish extremes.

Again just like in February, June and July all we hear are technical reasons for why the market has to go down. Folks I’m going to warn you again. Cycles and sentiment work, and they are much more powerful movers of markets than technical chart patterns.

Cycles and sentiment are now warning that a bottom is fast approaching. On top of that institutional traders began to accumulate stock today (large buying on weakness data).

As soon as the dollar rolls over, and it will roll over into its yearly cycle low, it is going to put tremendous upwards pressure on virtually all assets (with maybe the exception of bonds).

There are another two signs that a bottom is approaching. First off we have another Bollinger band crash trade in play. 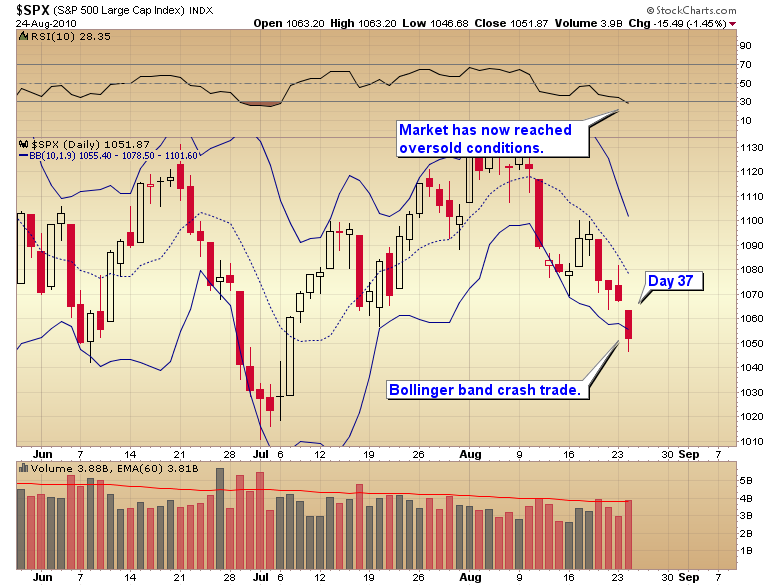 I’ve noted before that these panic selling days often occur either very near or at cycle bottoms.
Also the market dipped down to and bounced off of the 75 week moving average. 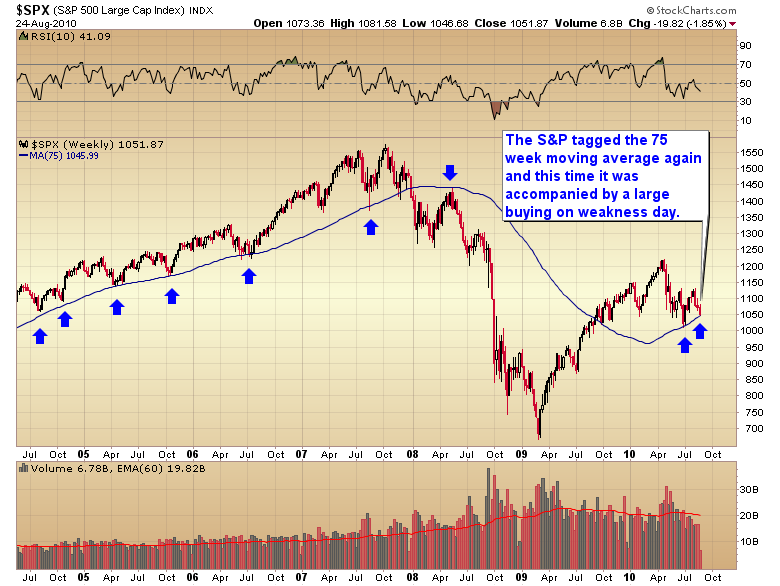 As you can see this has acted as strong support and resistance in bull and bear markets. If the cyclical bull is still alive then the market shouldn’t drop more than marginally below this level.

This late in the daily cycle I expect this will be the case.

This will be the fourth time I’ve warned bears to beware of an impending cycle bottom. They ignored the warning three times to their chagrin.

Bears would be wise to cover shorts as soon as a swing low forms. Of course if Bernanke happens to mention the Q word shorts risk getting caught in a huge gap up.

155 thoughts on “DANGEROUS TIMES FOR THE BEARS”