Now that we have a weekly swing low and a higher high I think the odds are heavily in favor of the intermediate cycle bottom being in place for gold. Just like all the calls for a market crash back in June, the calls for sub $1000 gold are probably going to be a bit premature. I really doubt we will ever see $1000 gold again during this bull market.

It was simply getting too late in the intermediate cycle for gold to have enough time to make it all the way back to $1000. Just like we had run out of time in June for the head & shoulders pattern in the stock market to have any realistic chance of completing.

History has show time and time again that trading based solely off lines on a chart just doesn’t give one an edge in the market. I would say the many technicians over the last month have just added even more data to support that conclusion.

Now don’t get me wrong, I’m not saying I don’t use technical analysis, I do. I just don’t use it exclusive of everything else. When cycles, sentiment and money flows are calling for a trend change then I ignore the charts and prepare to change directions. This is exactly how I spotted the stock market bottom and what I think will turn out to be the bottom of the gold correction.

Now I want to take a closer look at that correction, because despite the dire warnings of the gold bears, something pretty amazing happened during this correction.

Over a 6 week period gold pulled back a very modest 8.6%. That was considerably less than the 17% correction the stock market suffered and in fact one of the mildest intermediate declines of the entire secular bull market.

Even more amazing was the correction by mining stocks. I know a great many investors and traders became disgusted with miners and probably gave up on them during the last 6 weeks. But the reality is the 14% correction in miners is again one of the mildest intermediate pullbacks of the entire bull market. 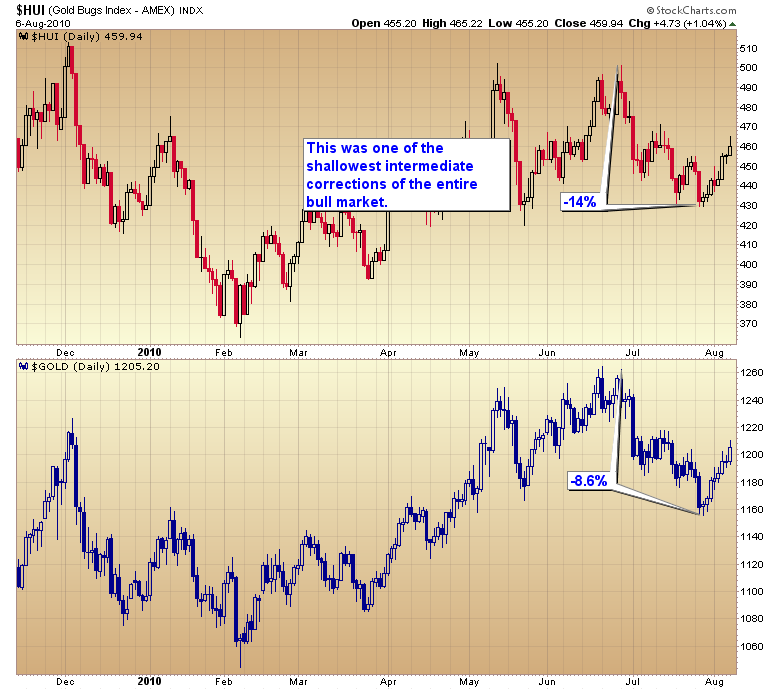 I originally thought the HUI might hold above 450 for the remainder of the bull market. Admittedly I missed on that one. It dropped 20 points lower than that and spent a total of 12 days during this correction below 450. All in all though I wasn’t too far off 🙂

What I really want to call attention to is the silver market. I think something big is brewing under the surface in  silver.

During the current intermediate bottom however silver did something that up to this point was just unheard of. As gold dropped into the intermediate low silver diverged positively from gold. 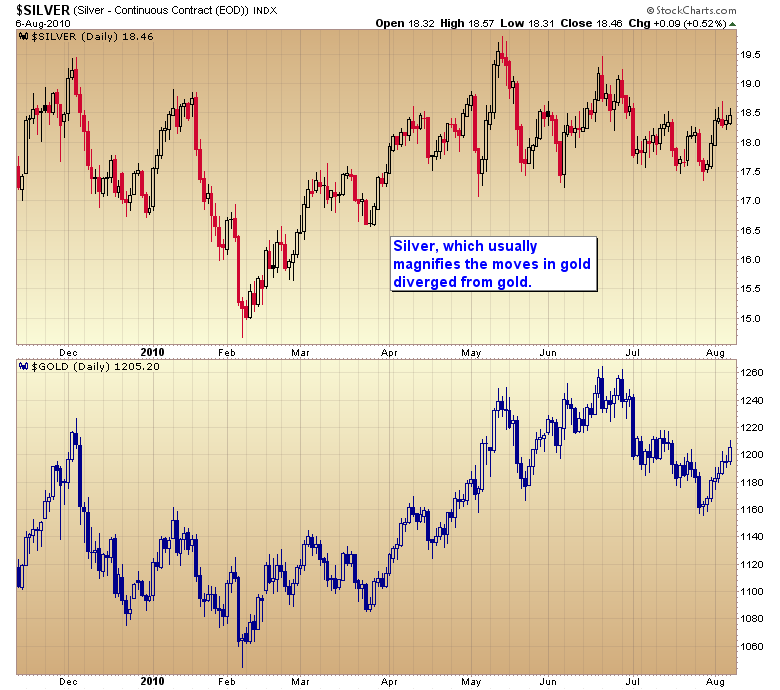 As gold was breaking down out of the bear flag on its way to $1155 silver did something its never done before. It ignored gold. As a matter of fact silver just continued to consolidate in the $17.50 to $18.50 range that it has been in for the last 4 months.
Folks something is going on in the silver market. Perhaps we have a supply problem brewing, who knows. What I do know is silver is now acting differently than it ever has before and I want to own a big chunk of silver and silver miners as we head into the final stages of this C-wave.

135 thoughts on “SOMETHING BIG IS BREWING”