Unless something happens in the next couple of hours the S&P is going to form a swing low this morning. That is a prerequisite but not a guarantee of a daily cycle bottom.

Last week  I called attention to the volatility coils forming in the S&P and silver. About 70% of the time the initial thrust out of a coil ends up being a false move that is quickly reversed by a more powerful and durable move in the opposite direction.

We are seeing that play out right now in silver. As of this morning silver has completely reversed the initial break and is now in the process of breaking through the $18.50 resistance level. 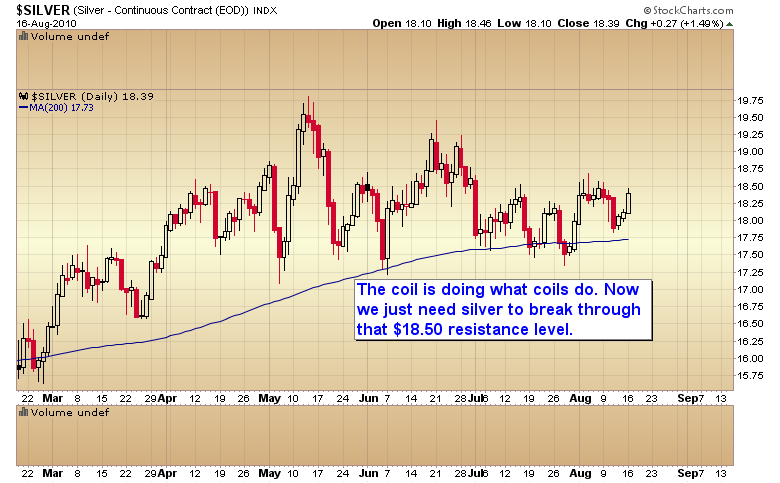 With the formation of the swing low this morning in the S&P the odds are starting to look favorable that we are now putting in the daily cycle low in stocks. If the coil pattern plays out here like it is in silver, and like the historical stats would suggest (and I think it probably will) then we should see a powerful surge out of this bottom.
The fact that the advance/decline line has already made new highs is a big plus for the bulls. 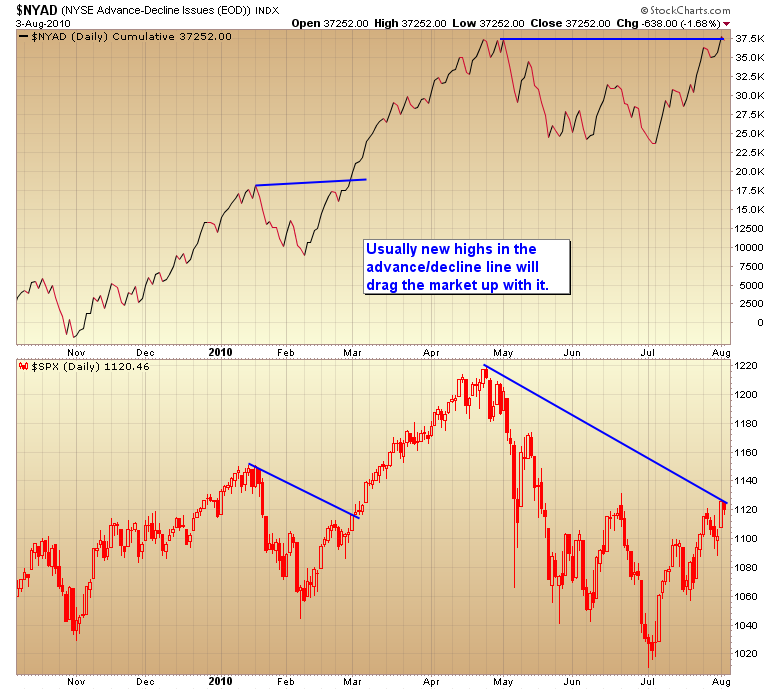 Usually new highs in the AD line will act to drag the market higher. As you can see in the chart this is exactly what happened after the February intermediate correction.

I wouldn’t rule out a move to new highs during this next daily cycle. Remember we are coming off one of the most depressed sentiment levels in the last 10 years. That kind of extreme sentiment can be a powerful base for a big push higher.

Finally I’m watching the dollar closely. Since I don’t think stocks can sustain any significant rally in the face of a rising dollar we will have to see the dollar quickly break down. To do so now would not only indicate an extreme left translated daily cycle but also a left translated and failed intermediate cycle.

If you remember the last two requirements I’m looking for to determine if the 3 year cycle decline has it’s hooks in the dollar is a move below 80 and a left translated and failed (drops below prior cycle low) intermediate cycle.

If the dollar breaks down here we are going to have confirmation that Bernanke is running the QE presses again and I think we will then be on our way into what will probably be the first of several currency crisis for the US dollar.