In a word, not a chance in hell.

Folks we’ve had three real crashes in the last 100 years. The odds of a 4th crash following right on the heels of the 3rd is minuscule.

In the fall of `08 the financial system needed to roll over 700 billion in debt. Unfortunately the credit markets were imploding at that time which made it virtually impossible to refinance that debt. Many of the big banks were on the verge of going under. That was the trigger for the crash we saw in the fall of `08.

Those conditions don’t exist at this time and they aren’t going to exist anytime again in the near future. Governments the world over turned on the printing presses and made sure that scenario will never happen again.

Granted it’s human nature to experience an event like that and then be constantly looking around every corner for the next one, but it simply isn’t going to happen again. All these calls for a crash are either simply people who have no understanding of what causes a crash or people trying to shock and awe wide eyed bears into buying their bearishly biased newsletter service.

When the bear does return, and he will return eventually (he may have already), it will be because the economy is sinking back into recession. Those kind of bear markets are slow grinding affairs that creep lower interspersed with violent bear market rallies as governments throw unbelievable amounts of liquidity at the markets and economy in a futile attempt to halt the bear.

Not only that but one can expect the government to change the rules as we go along. At some point we can expect bans on short sales, more bailouts, more stimulus, etc. etc. It is the kind of environment that is a traders nightmare, especially if you are on the short side. In order to make money you will have to time the counter trend rally tops almost exactly and be prepared to cover on a slight break to new lows before the next violent rally takes off. 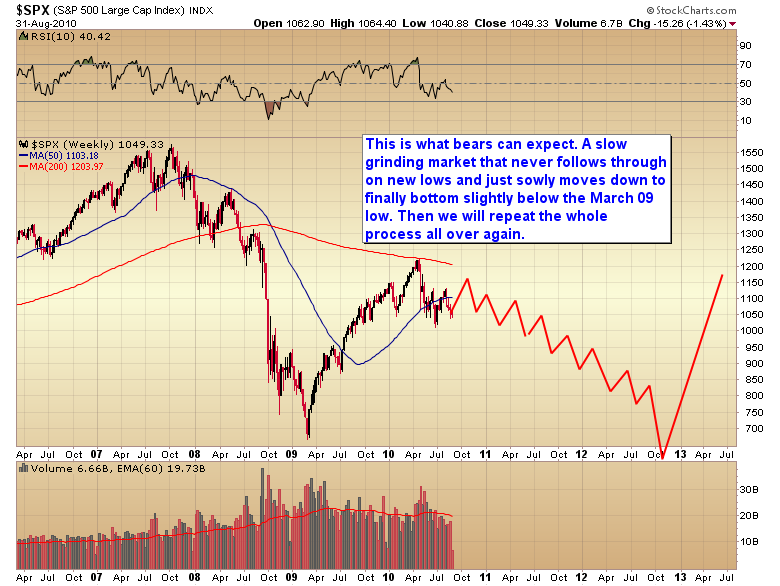 Moves to new lows will continuously fail to follow thru only to explode higher in the next counter trend rally. In other words not only a bulls nightmare but a bears too.

Now do you see why I have no desire to get tangled up in the stock market? This just isn’t the kind of environment conducive to making any consistent profits and it’s very likely both bulls and bears alike are going to lose lots and lots of money.

The easy money and big money will be made by just riding the gold bull. It is the only secular bull market left and very soon an event is going to happen that will transform this mild mannered bull into a rampaging monster.

Subs know what I’m talking about 🙂

147 thoughts on “CAN THE MARKETS CRASH?”