I’ve stated before that I expect this secular bull to continue until the Dow:gold ratio drops to at least 1:1. Considering how much further the ratio stretched on the upside (42:1) than any other time in history it’s entirely possible that we could briefly see gold become more expensive than the Dow.

As it pertains to the current C-wave I want to point out that we still haven’t even seen the ratio hit new lows yet. Every C-wave so far has managed to drive the ratio to new lows before topping. 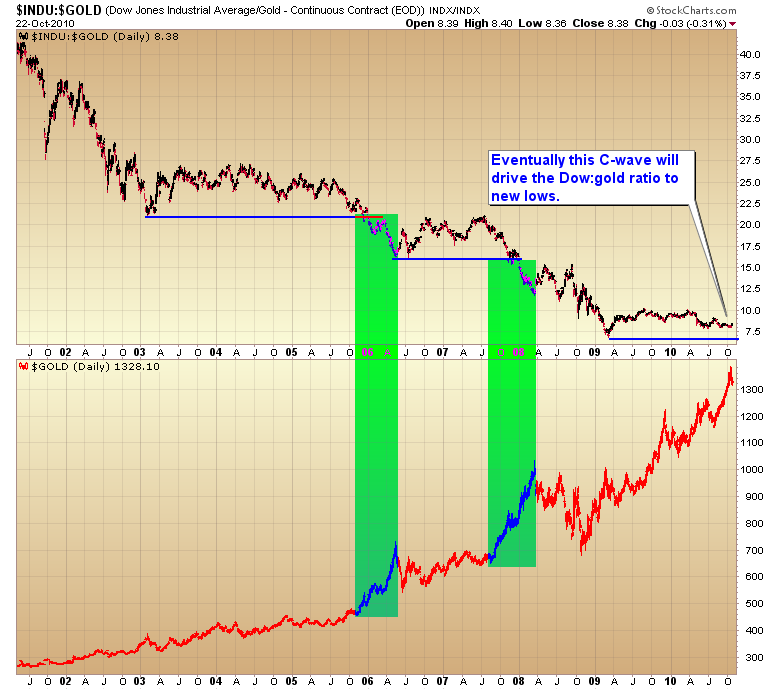 The current C-wave still hasn’t accomplished that goal. I’m confident it will eventually. Possibly even driving the ratio down to 6. If we assume modest new highs on the Dow of 12,000 we could be looking at $2000 gold before this rally tops (probably next spring).

It looks like we are going to form the swing low I mentioned in my last post this morning so the odds are now high that gold has put in the daily cycle low and the short term correction has run its course.

If one doesn’t have a position it’s probably a good idea to get one and if one was waiting for a pullback to add to positions it looks like that’s all we are going to get.

Depending on how the dollar reacts and how long it takes to reach the 74 pivot will determine how far and how aggressive the next leg up will be.

I will elaborate in tonight’s update for subscribers.