The general consensus now appears to be that all asset classes have put in an intermediate top and that the dollar has made an intermediate bottom. I jumped to that conclusion myself the other day. After further consideration I’m not buying it any more for several reasons.

First, the cyclical structure of the stock market is not set up for an intermediate top unless we are on the verge of another 2 month horror show like we saw this summer. I don’t think for a second that with another 900 billion scheduled to be thrown at the market, of which 110 billion will come in the first month, that we are going to see the market roll over into an extended correction during the traditionally bullish Christmas season. 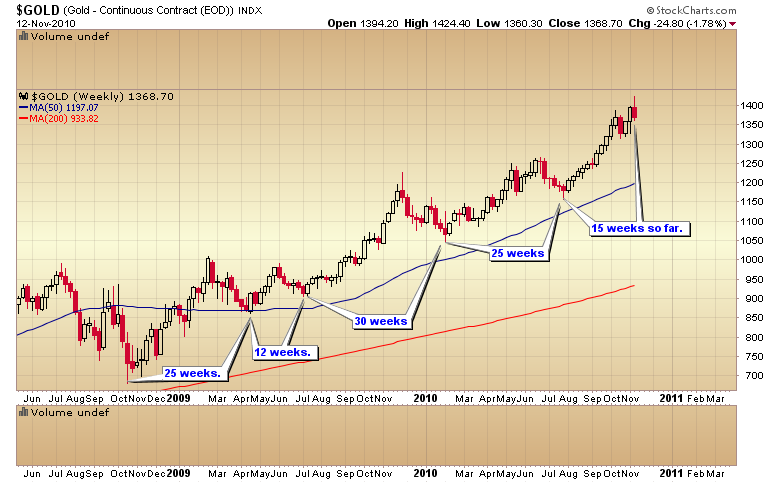 Every single one of them has run long except one and that one was followed by a very stretched 30 week cycle. If the current cycle follows the pattern of the last two years then it’s too early to expect an intermediate top, and the current correction is nothing more than the normal move down into a daily cycle low. Once that bottom is in place (possibly sometime next week) it should be followed by one more daily cycle higher before putting in the larger degree intermediate top. 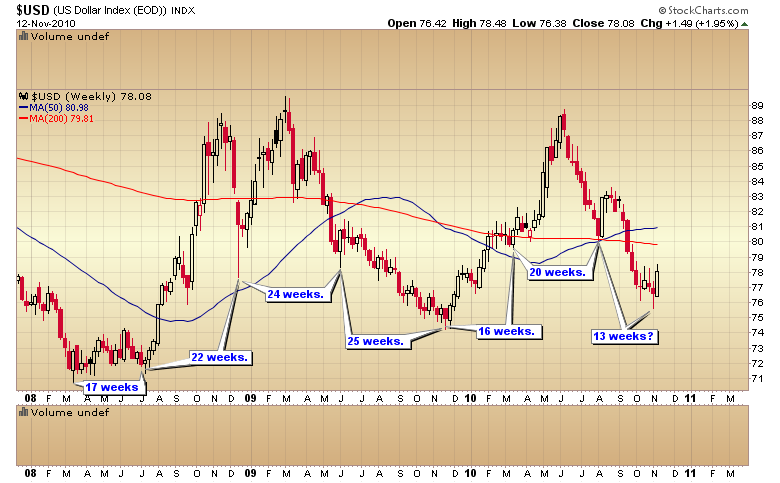 You can see in the above chart that the Fed’s monetary policy has led to normal to slightly stretched dollar cycles also. The current cycle would have to have bottomed on the 13th week. This would also have to correspond to the yearly cycle low.

Now what are the odds of a yearly cycle low, a major bottom, being put in above 74, in a shortened cycle, with sentiment never hitting true bearish extremes? (The recent public opinion poll had bulls at 29% and I’ve seen it as low as 22% at prior yearly cycle lows) Pretty slim in my opinion.

There is no question the dollar is now in the grip of the three year cycle decline and in the beginning stages of a currency crisis. That being the case I seriously doubt the dollar will be able to move significantly above major resistance at the 80 pivot. It’s already half way there now. If this is an intermediate bottom the rally is about to hit a brick wall that I have serious doubts it will be able to penetrate for more than a day or two, if at all.

Far more likely in my opinion that the dollar rally will fail at 80 and roll over into the natural timing band for an intermediate cycle low sometime in mid to late December. This should drive stocks and gold higher into December before finally rolling over into intermediate degree corrections in January or early February.

Finally, to top it off, we still haven’t seen the large selling on strength day or days that occur at virtually all intermediate tops. Until we see signs that big money is sneaking out the back door I’m going to assume the intermediate rally is still intact.

By the way, my good friend Doc, who most of you are familiar with either from his blog or from the insightful comments he posts in the SMT comments area, has offered a discounted rate for his newsletter to SMT readers. You can go here to take advantage of his offer thru Thanksgiving weekend. He might even buy me a chicken burrito or two if you sign up 😉
http://www.thedocument.com/members/smt.cfm