It’s almost impossible to find anyone who is long term bearish on the stock market or economy at this time. In the recent Barrons poll every single analyst expected a rise in stock prices next year and  continued economic expansion.

I think they are all going to be wrong, horribly wrong. I believe next year the stock market will begin the third leg down in the secular bear market. And the global economy will tip over into the next recession that will be much worse than the last one.

I’ve gone over the 3 year cycle in the dollar index many times. The dip down into the next 3 year cycle low this spring should drive the final leg up in golds massive C-wave. What I haven’t talked much about is what happens after the the dollar bottoms.

I actually expect this three year cycle in the dollar to play out almost exactly like it did during the last three year cycle. When the dollar collapses this spring it will not only drive the price of gold to a final C-wave top, it will drive virtually all commodity prices through the roof, the most important being energy and to some extent food.

It was the sudden massive spike in energy that drove the global economy over the edge into recession in late `07 and early `08. The implosion of the credit markets just exacerbated the problem. You can see on the following chart just as soon as Bernanke drove the dollar below long term historical support (80) oil took off on its parabolic move to $147. 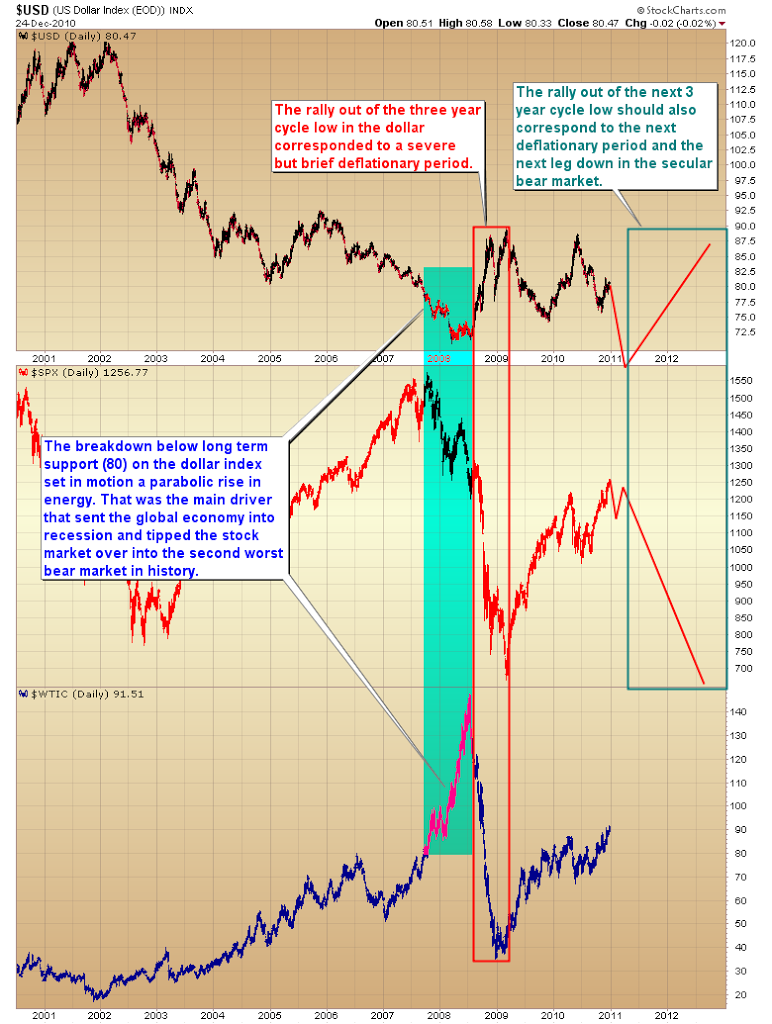 What followed was a collapse in economic activity and the beginning of the second leg down in the long term secular bear market for stocks.

This was mirrored by the dollar rallying out of the 3 year cycle low. That rally was driven by the severe, but brief, deflationary pressures released as the global economy and then credit markets collapsed.

We will see the same thing happen again. In his attempt to print prosperity and reflate asset prices Ben is going to spike inflation horribly as the dollar collapses down into the three year cycle low next spring. Just like in `08 that will tip the global economy back into recession and another deflationary period as the dollar rallies out of the three year cycle low.

The stock market will begin the trip down into the next leg of the secular bear market that it’s been in since 2000. The global economy will roll over into the next recession. Which I expect to be much worse than the one we just suffered through mainly because it will begin with unemployment already at very high levels.

Contrary to what economists and analyst are telling you, at the dollars three year cycle low next year it will be time to put our bear hats back on, prepare for hard times, and the next leg down in the stock market bear.

I will leave the special Christmas subscription offer, (15 months for the price of 12), up for a few more days. If you want to take advantage of the discounted price click here.