All markets are subject to the forces of regression. Newton’s basic laws of motion; Action and reaction.

At current levels both the S&P and Nasdaq 100 are stretched further above the 200 day moving average that virtually any other time in  the last 10 years. 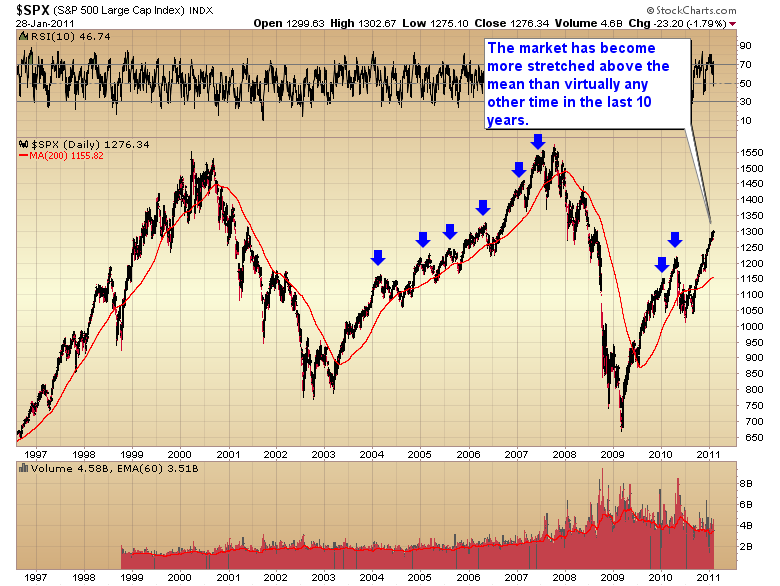 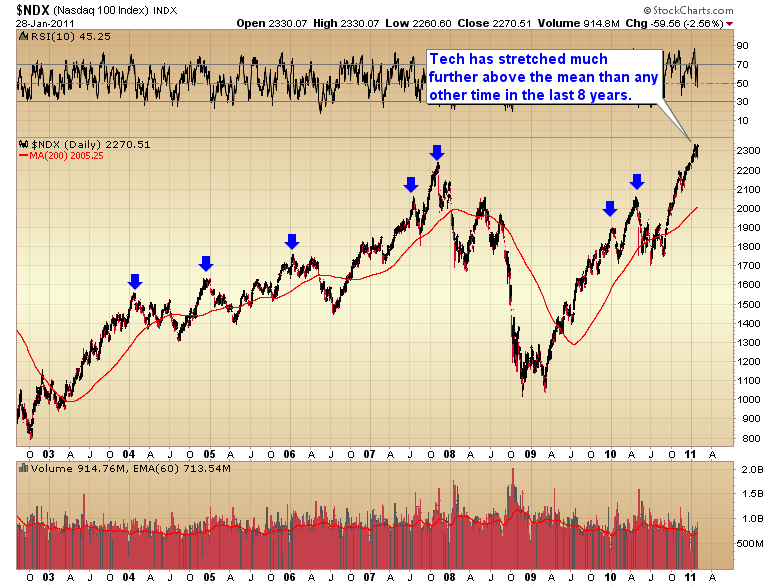 Not surprisingly the further a market stretches in one direction the harder it snaps back in the other once the forces of regression gets its hooks into the market.

The Fed is exacerbating this process with their constant meddling in the markets.

The flood of liquidity unleashed by Greenspan and Bernanke from 2002 to 2007 in the vain attempt to abort the bear market was directly responsible for creating the conditions that led to the market crash of 08/09.

The rally last April was pushed much higher than it would normally have risen by the forces unleashed during QE1. The end result; the correction when it finally came was much more severe than it would have been normally, even including a mini-crash in May.

QE2 has now driven the market even further above the mean than in April. Unless the law of action and reaction has been repealed we should soon see an extreme regression to the mean event .

I believe the Fed has put into place the conditions that will bring about the end of this cyclical bull market and usher in the next leg down in the secular bear.

During the next 3 months we should see the dollar begin to collapse down into the 3 year cycle low unleashing the currency crisis we’ve been expecting. This will drive a massive surge in inflationary pressure that will poison the fragile recovery and send the global economy back down into the next recession. A recession that should be much worse than the last one as it will begin with economic conditions much weaker than in `07.

The last time the Fed did this it produced a brief period of prosperity by creating a real estate and credit bubble. We all know how that ended. This time I expect the party to last two years tops, which means this cyclical bull should top by March. In their ill fated attempt to get something for nothing the Fed is going to cause a currency crisis and a massive surge in global inflation.

The price we will all pay when the house of cards comes crashing down again will be multiples more expensive than last time.

334 thoughts on “REGRESSION TO THE MEAN”