Gold is on day 4 of the decline into it’s daily cycle low. On average gold puts in a cycle trough about every 20-30 days. This one has stretched slightly long, no doubt driven by QE2. As a matter of fact almost all cycles have been stretched the last two years by the Fed’s printing activities. Consequently all markets have been swinging wildly between bullish and bearish extremes.

Think of it as a rubber band. The further you stretch it the harder it snaps back once the pressure is released. Gold and especially silver were stretched extremely tight during the last couple of months. Now that the profit taking event is here it is understandably severe simply because the upside was so powerful.

However QE hasn’t ended. So once the correction runs it’s course we should see another massive swing to the upside, again driven by free money and the extremes to which gold moves to the downside. The further the correction goes the more powerful the rebound will be once selling pressure exhausts.

It will also be driven by the many investors and traders that got thrown from the bull during the correction chasing as the metals surge higher out of the cycle bottom.

I’ve noted in the subscriber reports that gold will usually reach certain short term oversold conditions at daily cycle bottoms. We are now getting close to those conditions with this mornings move. 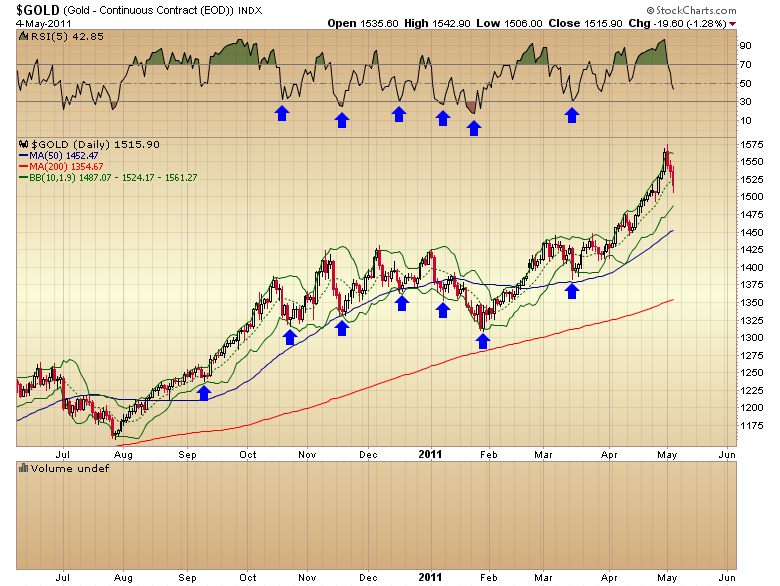 Someone trying to pick a bottom should be fairly close if they buy on a touch of the lower Bollinger band.

Stocks and oil are also moving down into daily cycle lows. Oil especially is very deep in it’s cycle and due for a bottom soon. I would guess it will bottom within a day either way of gold. Oil is slightly ahead of gold and has already moved to short term oversold levels deep enough to form a cycle bottom. I doubt it will drop too much further than $105 and I certainly think buyers will step in at $100. 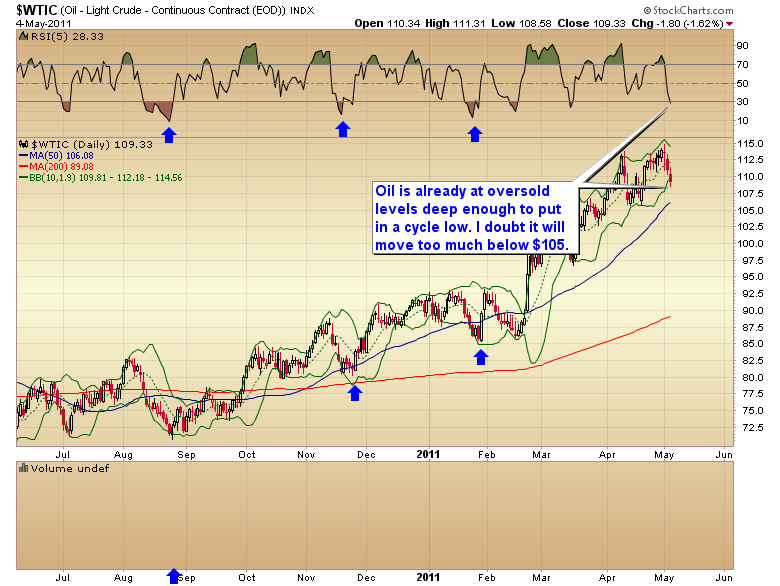 There is a possibility that gold, stocks and oil will all form a bottom sometime tomorrow on the May jobs report. If the report is weak (which is a strong possibility) we could see a gap down open. If the gap is recovered by the close and especially if the market can close positive we will probably have our cycle low in place.

We would then need to see a swing low on Monday to get the first confirmation that the correction has run it’s course.

461 thoughts on “NEARING THE BUY ZONE”