The debate lately is whether or not gold still has one more leg up. For the many reasons I went over in last night’s report I think it has become too dangerous to continue to play the long side in the precious metals so I don’t really care anymore whether gold is going up. The risk is now high that one gets caught in an intermediate decline or worse a possible D-wave.

Here is one more reason. The miners have broken below a prior daily cycle low. 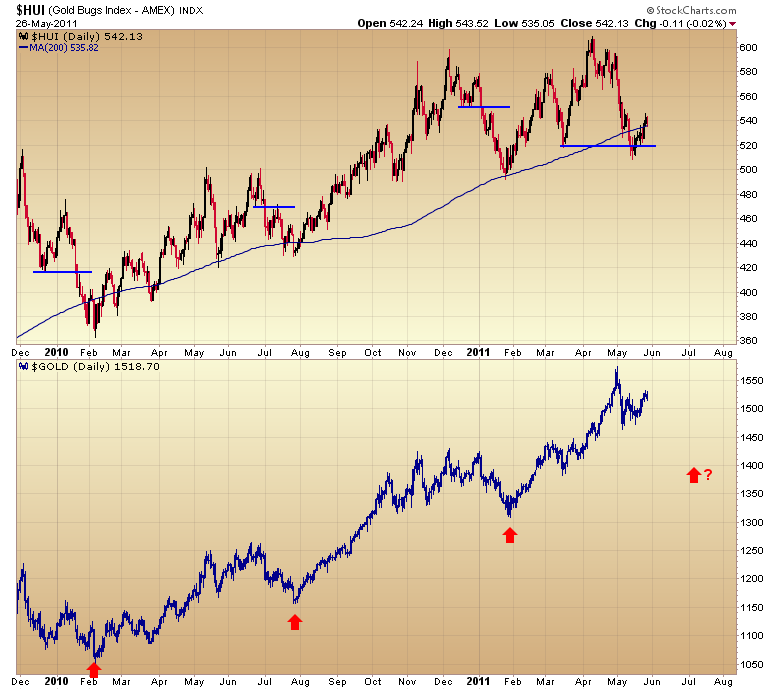 This isn’t a perfect signal. Of course nothing in this business works 100% of the time but this particular signal works about 80-90% of the time and those are the kind of odds it usually just isn’t worth bucking.

You can see in the above chart that every intermediate decline in gold was preceded by the miners falling below a prior cycle low. That condition is now active in the current market.

As a case in point a violation of a daily cycle low in gold is the main confirmation we look for to confirm that gold has entered an intermediate degree decline.

I’ve marked the expected timing band for when the next intermediate low should bottom in late June to mid July. You can see that the summer low came last year in late July. The yearly cycle tends to run about 12 months on average so I wouldn’t expect this to be over for at least another month to a month and a half. As it stands today gold topped on week 14. That gives it a lot of time to grind lower. As a matter of fact every intermediate decline since this phase of the bull began has dragged gold considerably below the 50 day moving average and fairly close to the 200 DMA. That would suggest gold would at least move back to $1400 if this is just a normal intermediate degree correction.

Folks this is what you are risking getting caught in by trying to squeeze the last few pennies out of this sector. Now if gold was doing what I think it should be doing I would be happy to hang on to positions. But it’s not! The weak dollar yesterday and today for that matter should be sending gold rocketing higher. So far it’s not happening.

Combine this with the warning sign from the miners and I simply don’t want to play the game anymore. It’s easier to just wait for the intermediate correction or D-wave to run it’s course and then get in as close to the bottom as we can for a much safer trade and one we will be able to hold onto for 12 to 15 weeks with little fear of significant draw downs.