Today I am going to teach you a little about cycles.

First a little background information. I’m going to be discussing almost exclusively the intermediate degree cycle. Now to start let me correct some misconceptions. Cycles are virtually worthless for timing tops. Cycles are measured from trough to trough.  All we can really do with cycle theory is develop timing bands for bottoms, tops can occur at any time.

Next I want to go over the concept of left and right translated cycles as it is pertinent to what is happening in the stock market.

Now in order to understand how a cycle is translated you first have to determine the average duration of the cycle. In our case we are going to focus on the intermediate degree cycle in the stock market. That cycle averages 20 to 25 weeks trough to trough. The median being 22 weeks. If we divide 22 weeks by 2 we come up with 11 weeks. That is an important number. It is the dividing line between a left translated cycle and a right translated cycle.

In a healthy bull market an intermediate degree correction is a profit-taking event, and that’s all it is. The media will find some scary reason for why the market is correcting but the real truth is that the market has just rallied long enough and far enough and is due a corrective move to consolidate the gains. There is one exception, which I will go over in a minute. Healthy bull markets are composed of multiple right translated intermediate cycles.

Next I’m going to show you the 2002 to 2007 bull market. The intermediate cycle troughs are marked with blue arrows.

In the chart below you can clearly see that every intermediate cycle, with one exception, rallied more than 12 weeks. This is a sign of a healthy bull market. The rallies are moving to new highs. When the intermediate rallies mature they top late in the cycle followed by a profit-taking event that holds well above the prior intermediate trough.


The one exception, and I have marked it with the blue box, is that sometimes an intermediate cycle will top in a left translated manner and make a lower low after the second leg up in a new bull market. This is just a sign of a market that needs to consolidate a huge move out of a bear market bottom. 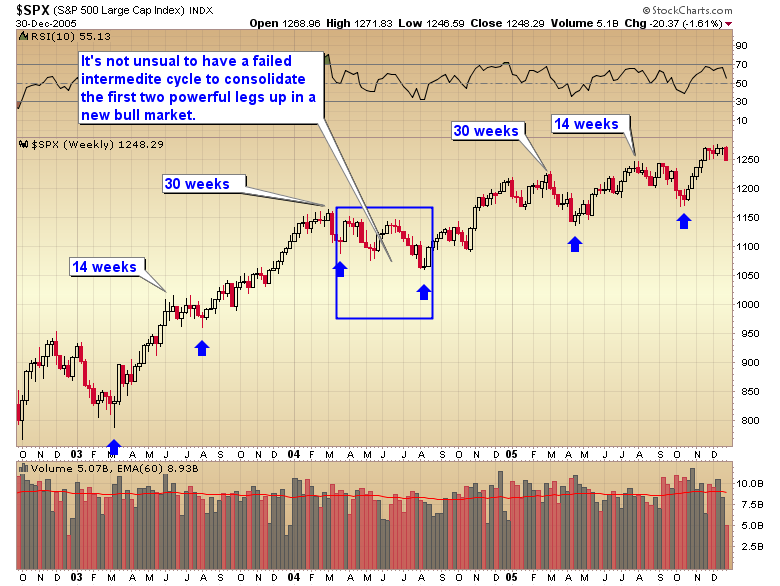 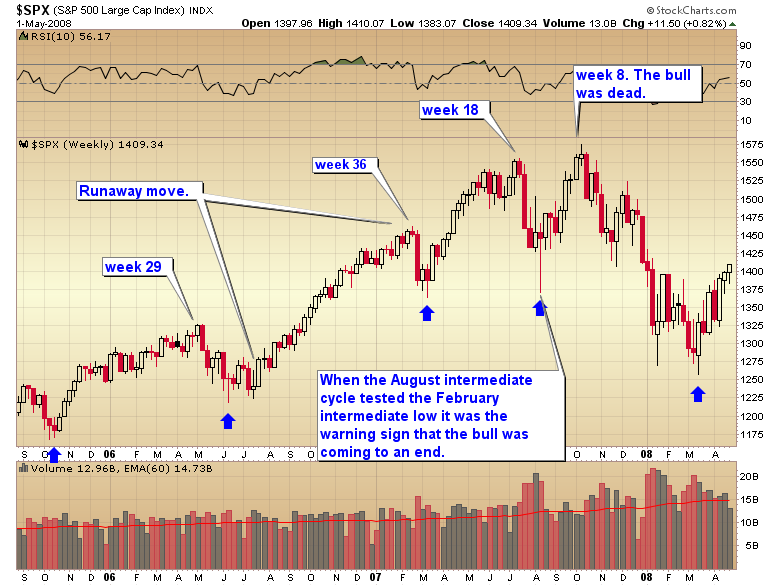 However, in the summer of 07 something happened that was a glaring warning sign that the cyclical bull market was in trouble. And that sign; the summer intermediate cycle dropped all the way down to test the prior cycle low in February. In a healthy bull market that should not happen. As you recall this was right about the time that subprime mortgages began imploding. Smart money could read the writing on the wall, and they began exiting the market.

The deathblow came when the next intermediate cycle topped in an extreme left translated manner on week eight. That was the warning sign that institutional buyers had left the market. At that point the bull had officially died.

Now let’s take a look at the current bull market. 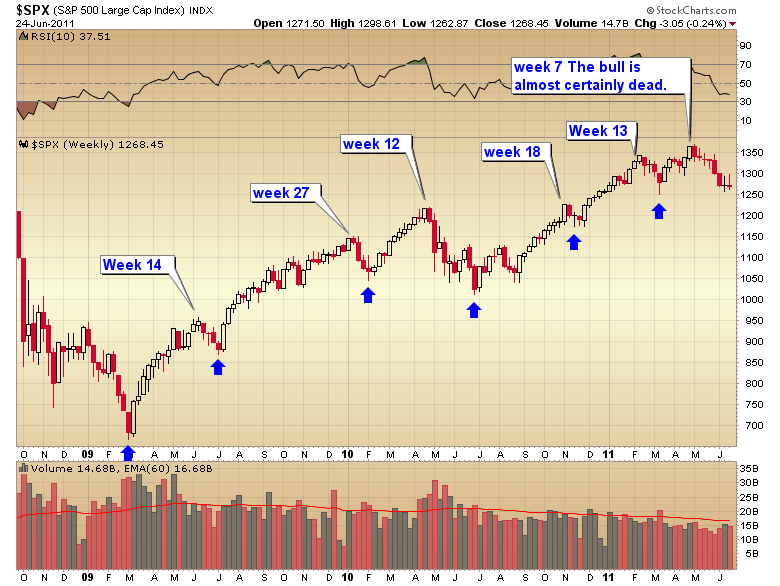 Up until last summer this was a healthy bull market. The intermediate cycles were all right translated, and we were making higher highs and higher lows.

Last summer that started to change. To begin with the intermediate cycle topped on week 12, right on the dividing line of right and left translation. The market had managed to rally 16%, so even though time wise it was a bit early for an intermediate decline, in magnitude a 16% rally is enough to trigger a profit-taking event. However, this did not turn into just a normal profit-taking event. The decline moved below the February intermediate cycle low. Alarm bells started to ring and Bernanke he heard it. Thus began QE2 and the markets were pulled back from the brink… temporarily.

I don’t think anyone is under any delusions about what has powered this bull market and propped up a deeply flawed economy. Trillions and trillions of freshly printed dollars that’s what. But that is now coming to an end. Does anyone really believe that the economy or the stock market can continue to levitate without a constant flood of liquidity? If you do I have some beachfront property I want to sell you here in Las Vegas.

The market doesn’t believe either! We now have an extreme left translated intermediate cycle in progress that topped on week eight. Notice how the rally out of the March bottom was only able to make marginal new highs with absolutely no follow-through. That is a sign that institutional traders sold into the breakout. And now we have a market that is on the verge of penetrating a prior intermediate cycle low.

Next I want to look at the dollar. In a deflationary environment the value of currency rises. As many of you know I have been predicting a major three-year cycle low for the dollar to occur in the spring or early summer of this year. It came during the first week of May.

These major cycle bottoms tend to produce very powerful rallies, often lasting up to a year. Now if we were just coming out of recession and productivity was increasing, or we had a new industry that was creating massive job growth then yes I would expect the market to be able to resist a rising dollar. Actually in that scenario a rising dollar is signaling a healthy economy.

In our current environment however a rising dollar signals deflation!

You can see that during the rally out of the `08 three year cycle low the stock market came under severe pressure. I think it’s safe to say that the same thing is going to happen this time as the dollar rallies.  Unfortunately, we don’t have a new industry to drive job growth, power a sustainable economy, and allow the markets to resist a rising dollar. All we have is commodity inflation created by the Fed in a vain attempt to print prosperity. 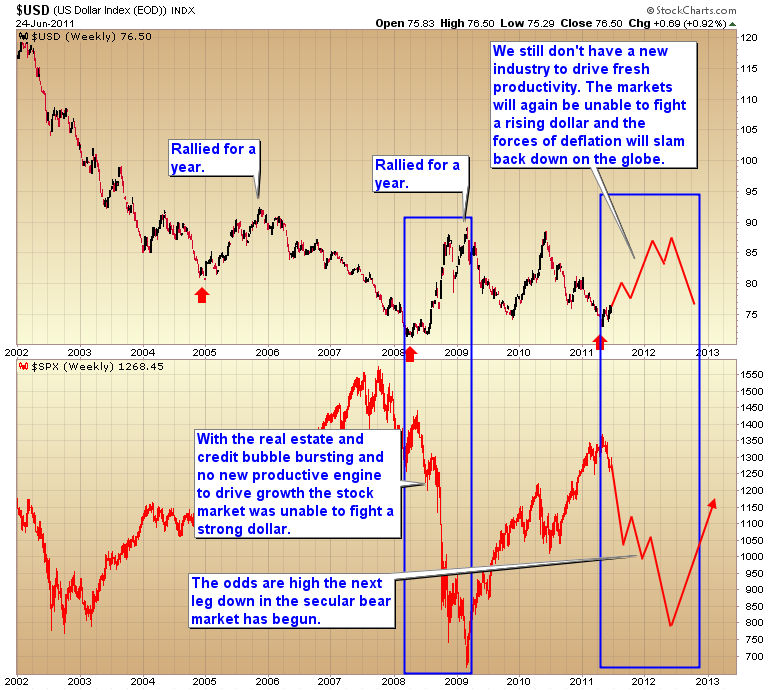 I’ve been warning for months that once the dollar bottomed and started to rally it would signal the end of the bull market and the start of the third leg down in the secular bear market.

At this point I think the only hope the Bulls have is for Bernanke to turn the dollar back down into an extreme left translated three-year cycle. Unfortunately, he has decided to turn off the money spigot (don’t worry he will be turning it back on soon, although by then it will be too late).

So far this bear market is progressing as expected. It started with the tech bubble bursting. Transformed into a financial crisis. Has now infected sovereign debt. And will ultimately end in a massive currency crisis.

Just as a reminder the 15 month special will close by midnight tonight. www.smartmoneytrackerpremium.com