I apologize for the title, but I think we will all agree Beanie deserved that one. Now that I’ve gotten that out of my system, down to business.

I said in the Thursday night premium report that we would see manufactured economic data as this bear market progressed, but I had no idea it would start so quickly. Does anyone really believe we created 117,000 jobs last month and that unemployment decreased? I suppose with the markets in free fall it probably wouldn’t do to publish the true number, which was almost certainly negative. I suppose it was irrelevant though, it took the market less than 5 min. to figure out the numbers were a sham and sell off.

However, I think the decline is probably done at this point. In my last post I took a guess of 1200 to 1225 as a possible bottoming level. It looks like the government’s pathetic attempt at deception drove the market down a little further to 1175. We should now see a violent, and very convincing, bear market rally.

On average the S&P will rally about 90 to 110 points in the first 8 to 15 days out of an intermediate cycle bottom. And those are the statistics for intermediate bottoms in a bull market. Bear market rallies are much more violent.This one could be exceptionally so as I expect the powers that be will try to manufacture another rally similar to what happened at the end of June. This time though there will be true demand behind the rally. If the Fed turbochargers the move we could see 125 to 150 point rally over the next 2 to 4 weeks. 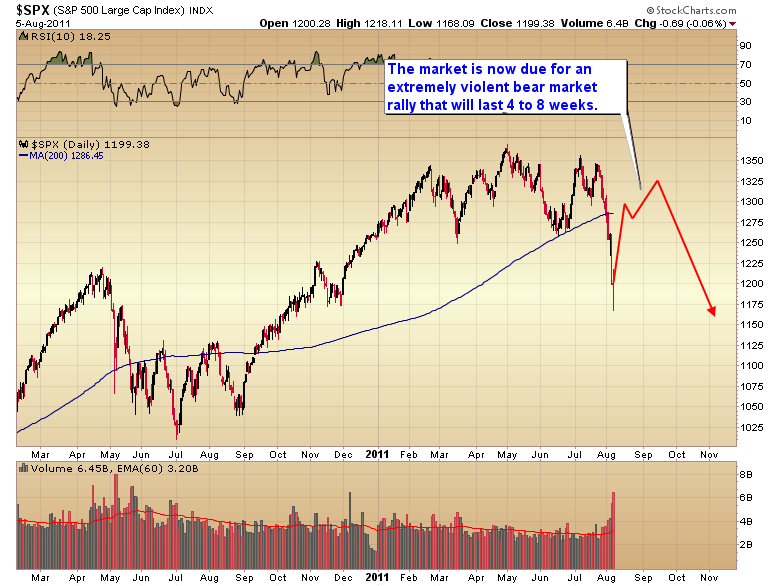 I’m positive after that kind of rally our friend Beanie will return with more talk of Dow 36,000. However he will be wrong again. We are, and have been, in a secular bear market since March of 2000 and in a cyclical bear market since May. Until stocks reach insane levels of undervaluation they are going to remain in a secular bear market. It’s possible that we may reach that bottom in the fall of 2012. That is when the next four year cycle low is due.