As I have been warning investors for many months, stocks have now entered stage III of the secular bear market. Gold on the other hand is now in the final parabolic phase of a 2 1/2 year C wave advance.

My best guess was that we would see a Dow:gold ratio of between 5-6 before this C wave ended. The ratio was at 5.71 as of today. For reasons explained in the nightly reports I think we may still have a little further to go on the downside for stocks and a little further upside in gold. So it’s entirely possible that we could see a Dow gold ratio of 1:5 before the trends reverse. 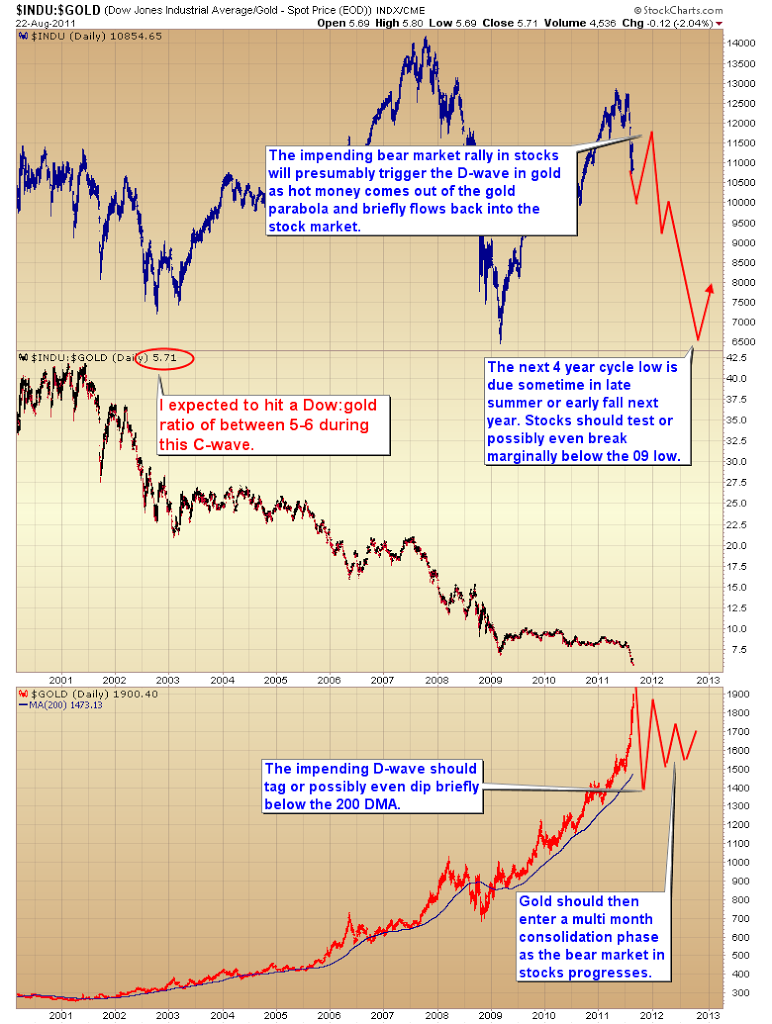 However the low risk, large potential trade is now in the stock market, not playing chicken with the gold parabola (also explained in the nightly newsletter).

Cyclically the stock market is now in the middle of the timing band for an intermediate bottom. Presumably a sharp bear market rally in stocks will trigger a regression to the mean, profit-taking event in the precious metals market (the D-wave).

D-Wave’s almost always test, and sometimes marginally penetrate the 200 day moving average. I’ve illustrated in the chart above a rough guess as to where I expect the countertrend  rally in stocks and the D-Wave correction in gold to retrace.

Keep in mind that the fundamentals for gold have not changed. A D-Wave is simply a profit-taking event triggered by an unsustainable parabolic rally. It has nothing to do with fundamentals. Once the D-Wave has run its course gold will enter a sharp snapback rally (the A-wave), after which it should consolidate for the remainder of the bear market in stocks.

Stocks on the other hand, after what should be a very convincing bear market rally, will roll over and continue down into a final four year cycle low, probably in the late summer or early fall of 2012.

Depending on whether or not the Fed tries to fight the cleansing process stocks should either test the March 09 lows, or if Bernanke tries to stop the bear market with another round of quantitative easing, we could see the March 09 lows breached.

Either way I expect that 2012 will go down as one of the worst years in human history. Certainly in the same category as 1932 if not worse.