Just as I expected, when the market failed to rally on the debt ceiling resolution, panic set in. As I have been telling people the stock market is not dropping because politicians are debating whether or not to spend more money. They have a long record of raising the debt ceiling whenever it threatened to interfere with their spending spree. So the resolution to the debt ceiling was never in question. We knew from day one that Washington would add another trillion or so to the deficit without any real attempt to cut spending. The market has been in trouble since May because it is starting to price in the next recession.

The S&P has now breached the March intermediate cycle low. In a mature bull market that is almost always a signal that a new cyclical bear market has begun. 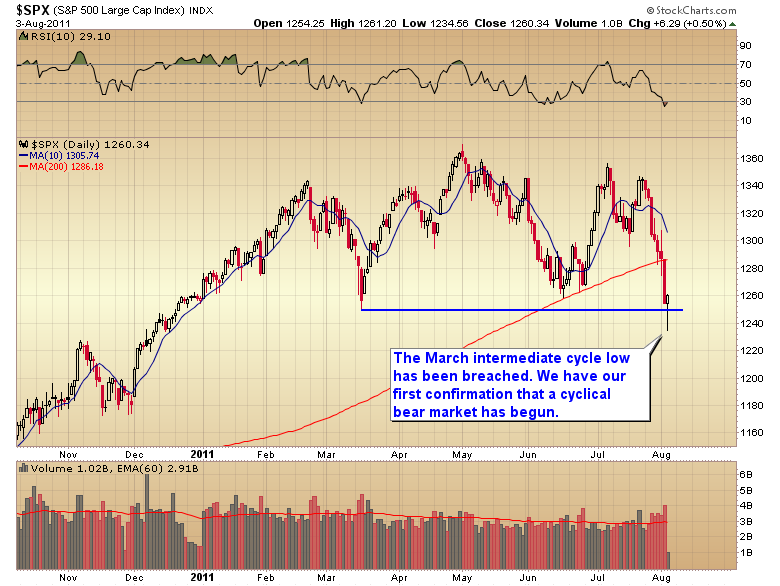 I’ve been warning investors since late April that this was coming. Many were fooled by the phony manufactured rally at the end of June. I knew at the time that the Fed’s pitiful attempt to manufacture a momentum move as QE2 came to an end would fail.

All that being said, the market is now moving into the timing band for a major intermediate cycle bottom. My best guess is that the reversal today will probably trigger a weak bounce up to the 200 day moving average, followed by one more leg down. That should mark a more lasting bottom and trigger a 6 to 8 week bear market rally. That rally is going to look very convincing and I’ll tell you why in just a second. But just like the rally in June it is going to fail. 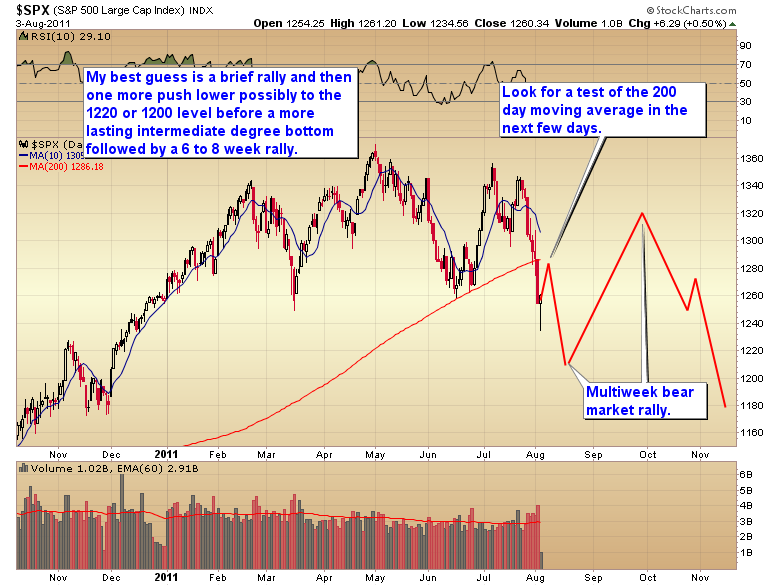 Folks, a recession is unavoidable at this point. The piper is going to have to be paid for printing trillions of dollars and bailing out the financial system. Unfortunately there’s no way around that. The question is will Bernanke make the ultimate blunder and initiate QE3? I’ll explain in a second. 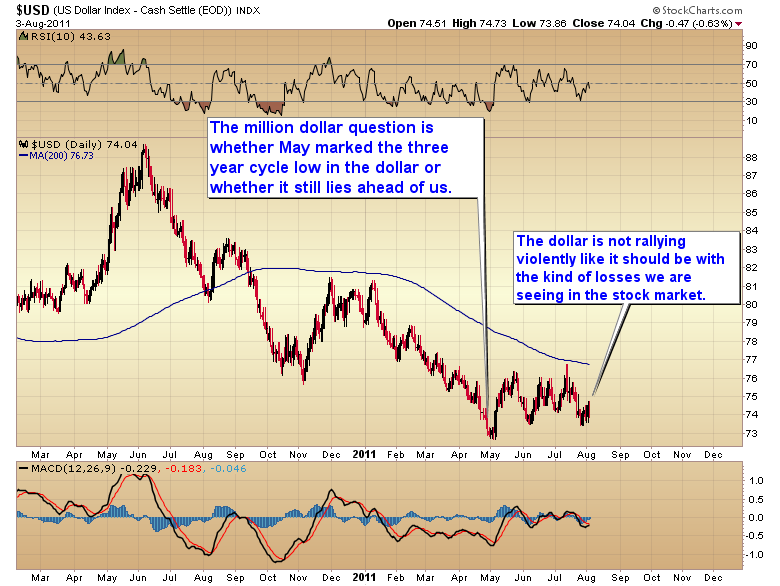 I’m starting to worry that Bernanke is going to initiate QE3 and he’s going to add a currency crisis on top of the economy sliding back into recession.The combination of both of these at the same time will trigger a collapse much worse than what we went through in 2008.

If the market decides that QE3 is in the cards that would be the trigger for our bear market rally. Unfortunately it would also be the trigger for another spike in commodity prices at the very time that the consumer is least able to withstand them.

What Washington and the Fed don’t seem to realize is that the problem isn’t the size of the dose, it’s that we are using the wrong medicine. We’ve already spent trillions to save the economy and it failed. Let’s pray that the powers that be have enough sense to recognize that more trillions are not going to cure the problem, they are going to exacerbate it.

Unfortunately what no one wants to admit is that there is no cure for our problem. We can’t stop it. It can’t be “fixed”. All we can do is make it worse. We desperately need to face reality and initiate the painful policies that are required to halt the car before it drives off the cliff. Failure to do that will mean that the market will force reality upon us as a major global economic collapse.

Before this is all over and done I fully expect the Keynesian economic model will get tossed into the trash heap where it belongs. If it wasn’t for politicians desire to spend more than they can afford Keynesian policies would have been discarded decades ago.

489 thoughts on “IS THE FED ABOUT TO MAKE THE MISTAKE OF THE DECADE?”