About it every 35 to 40 days we get a major profit-taking event occur in the stock market. In bull markets that’s all it is, a profit-taking event. In a bear market it is a resumption of the cyclical downtrend triggered by deteriorating fundamentals. It still remains to be seen whether or not stocks have rolled over into another cyclical bear market.

However we are entering the timing band for one of those daily cycle corrections. It’s not unusual to see this begin as a profit-taking event on the employment report, as we enter earnings season. 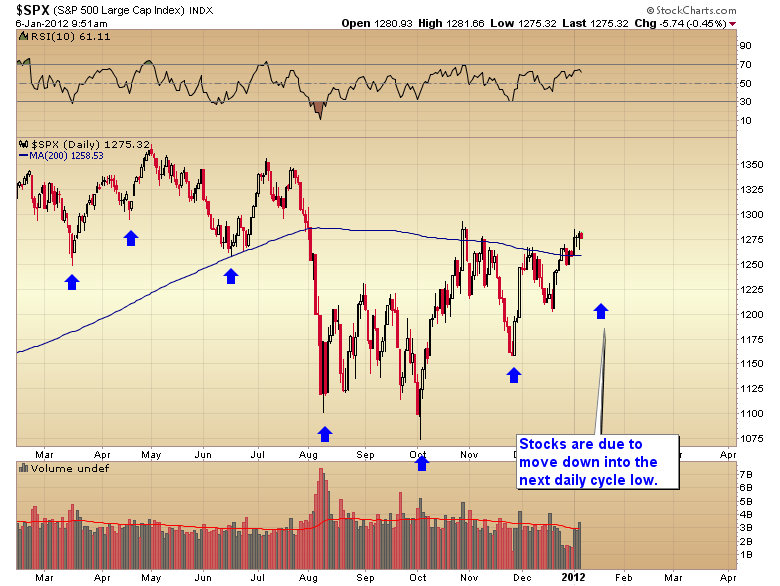 As long as earnings season meets expectations then that is all this should be, just a profit-taking event. However, if earnings season disappoints then this could intensify significantly. If in addition we start to see stress in the European debt market escalate it would magnify the rally in the dollar increasing the downward pressure as stocks begin the move down into that cycle low. Let’s face it the problems in Europe aren’t going away. The cancer in the debt markets is going to continue to chew its way up the sovereign food chain until it finally reaches the US bond market.

The fact that the dollar has consolidated for several weeks above the double top breakout is a strong sign that another powerful leg up is beginning. 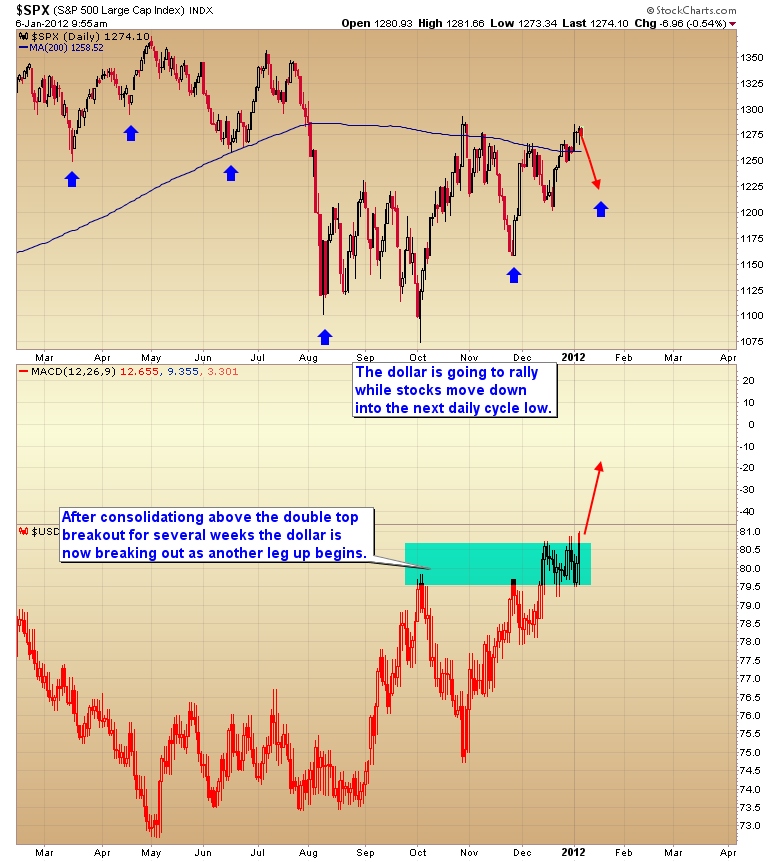 Even more concerning for the bullish case is the fact that the next daily cycle should roll over into a much larger degree intermediate decline. That would almost certainly power another leg higher in the dollar and depending on how severe the stress has become in Europe we could see the October lows tested, and even broken if this is a new cyclical bear market.

The kind of selling pressure that is generated at daily cycle lows and especially during an intermediate degree decline effects every asset class to some extent. Gold will be no exception. This is why I have been warning people to wait for the daily cycle low to form in stocks before jumping heavily into precious metal positions.

Gold may or may not have put in a final D-Wave bottom last week. But there is a good chance that bottom is going to get tested in the next couple of weeks. And then of course we will have to contend with the selling pressure as stocks move down into their intermediate degree decline in February and March. That could conceivably drive gold back down below $1523, although I think any dip below that level will only be marginal and quickly recovered.

Right now patience is the name of the game until the stock market has formed a daily cycle low which is due sometime in the middle of January. Cash or a modest position in the dollar index is safest bet for the next couple of weeks.