Friday’s big rally on the better than expected employment report has now generated the kind of euphoria that often creates intermediate degree tops. This coming week will be the 18th week of the current intermediate cycle. As you can see in the chart below the intermediate cycle runs on average 18-25 weeks from trough to trough. 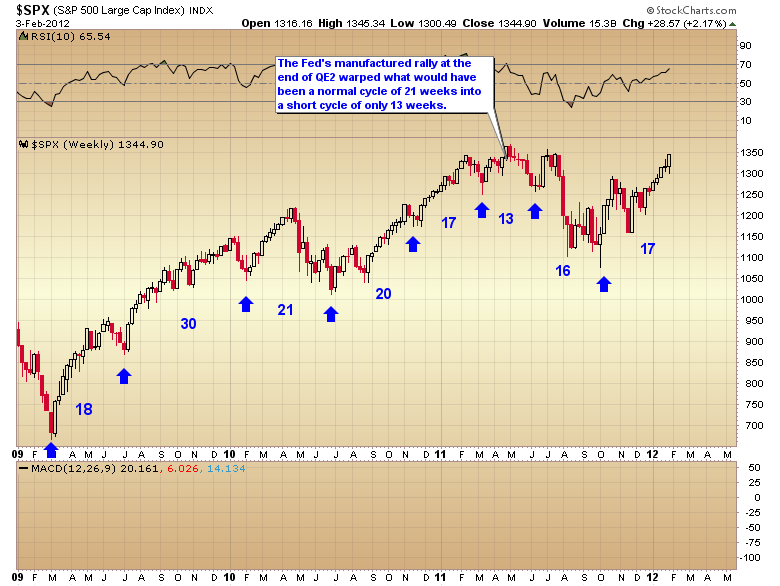 The time to buy “anything” is when the stock market puts in one of these intermediate degree bottoms. It’s way too late in the intermediate cycle, especially with the NASDAQ stretched 9% above its 50 day moving for anyone to be buying now. Now is the time for investors to be taking profits. And by taking profits I don’t mean selling short. I mean moving to cash.

The simple fact is that selling short is a fools game designed to take money away from retail investors. The only people that will ever make any consistent long-term gains by selling short are the very elite traders of the world, or big funds with massive research departments that can ferret out and find sick or failing companies.

What most traders who try to sell short fail to understand is that markets go down differently than they go up. This fact makes it very difficult to make, and more importantly keep, any profits garnered by selling short.

First off, tops are often a long drawn out process. They tend to whipsaw short-sellers to death before finally rolling over. I would say we have seen a very good example of that over the last four weeks.

Then even if one does manage to catch the top the intraday moves are often so violent that they  knock one out of their positions. And finally if you mistime the bottom you will give back most if not all of your meager profits during the first couple of days of the new rally.

All in all, the best position for 99% of traders is to go to cash when a correction is due. As you can see by that first chart a correction is now due. That doesn’t mean that it will begin Monday morning or even this week. What it does mean is that it is now too dangerous to continue playing musical chairs with a market that is at great risk of a sharp corrective move.

The fact is that ever since the dollar put in its three year cycle low in May, trading conditions have changed. Trades had to become much shorter in duration and profits taken much quicker.

Until the dollars major three year cycle tops that isn’t going to change. As you can see in the chart below we still have no confirmation of a major trend reversal yet. The dollar is still making higher highs and higher lows. It’s still holding well above a rising 200 day moving average and it hasn’t even turned the 50 day moving average down yet. 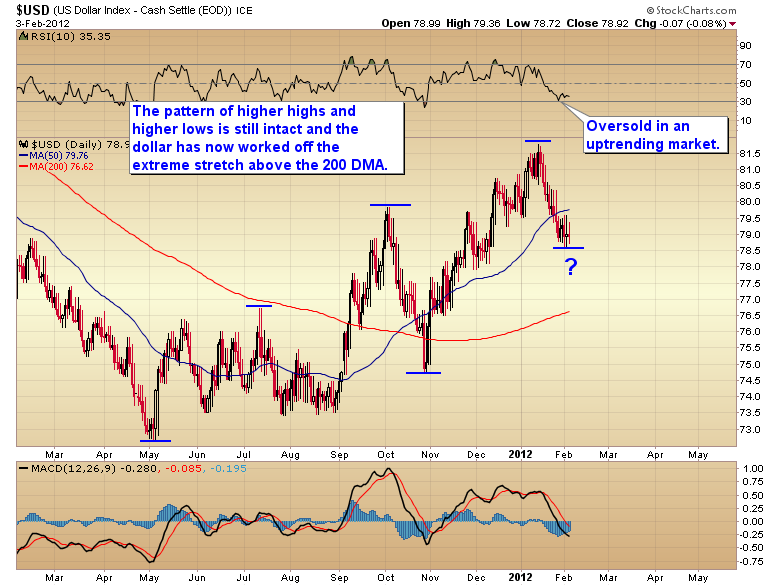 Once the stock market begins moving down into its intermediate cycle low it will almost certainly force another rally in the dollar, possibly (probably) back to new 52 week highs.That should at a very minimum pressure gold to retest the December lows, and if the selling pressure from the stock market is intense enough we could see another marginal new low somewhere in the high 1400s to low $1500 level. 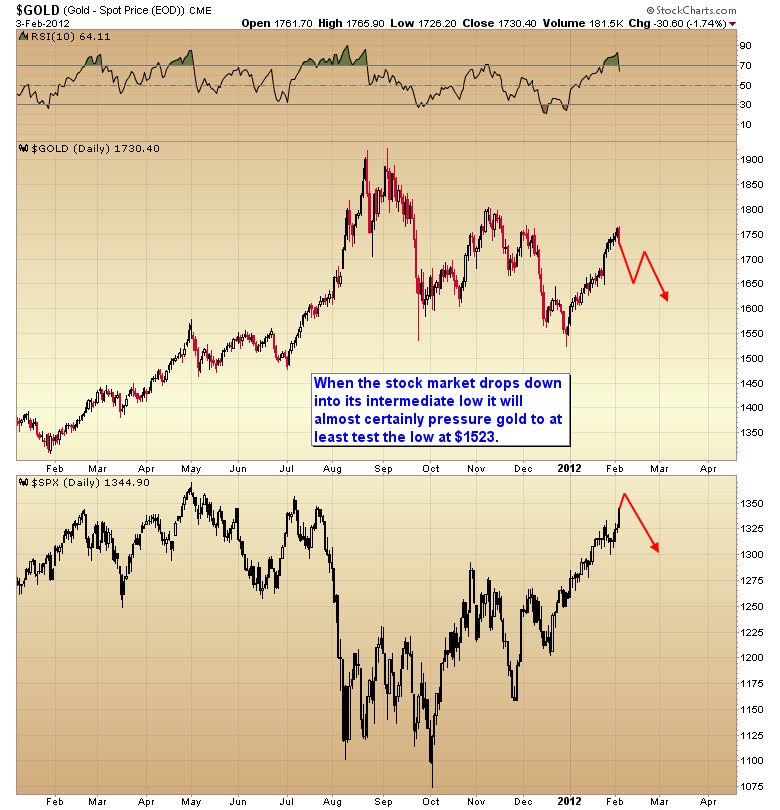 I should point out that gold still has not broken the pattern of lower lows and lower highs despite the powerful rally out of the December 29 bottom. Technically gold is still in a down trend. That down trend may be reconfirmed when the stock market drops down into its intermediate degree bottom. 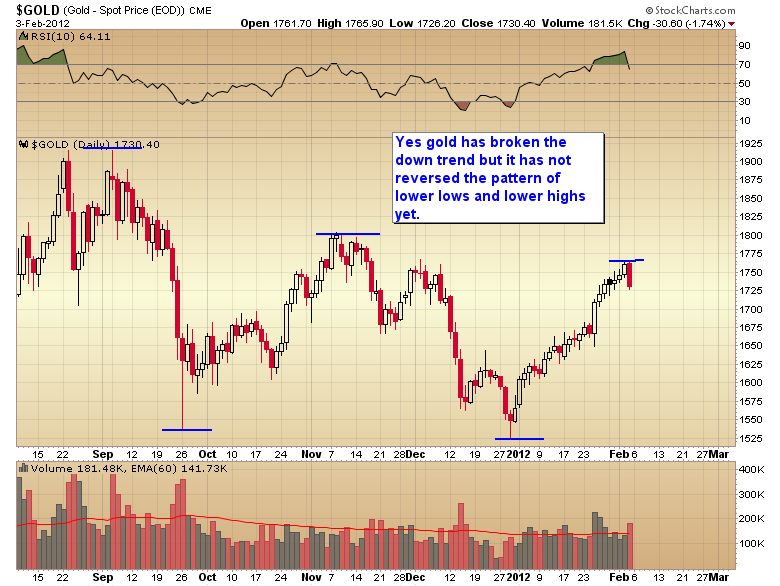 I know we all want gold to immediately return to the days of strong trending moves, long trade durations, and easy money. It’s only natural for investors to long for the good old days. It’s what causes investors to chase (in vain) the last bull market. Think of all the investors that are still chasing the tech bubble of 2000, or the millions of investors still trying to pick the bottom of the housing market, or more recently energy investors struggling to figure out why solar and oil service stocks have underperformed so badly for the last three years.

These are bubbles that have already had their day. They are never going to see those glory days again. Living in the past never made anyone rich. The people that get rich are the ones that figure out early where the next bull market is going to be.

That being said, gold is most certainly not in a bubble yet. But the last massive C-wave obviously topped in September. That was the largest and longest C-wave of this entire secular bull market. Once something like that tops it takes months if not a year or more to consolidate those gains before the next leg up can begin. 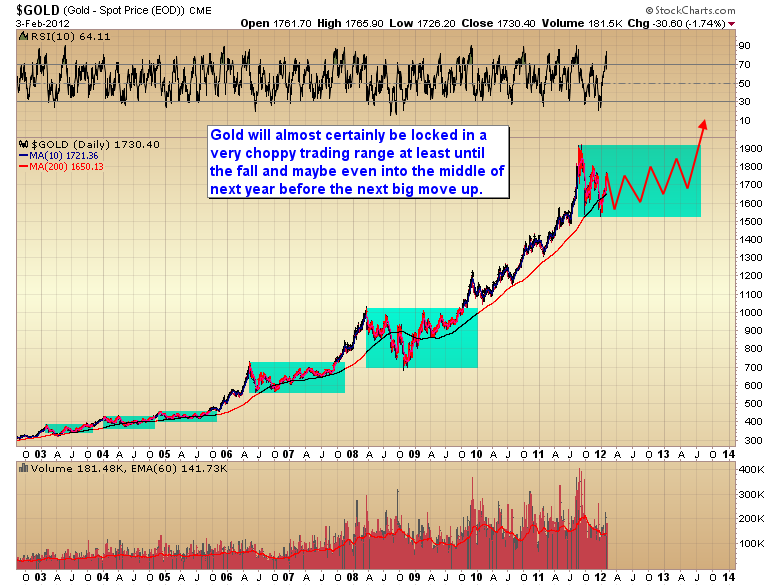 Analysts that are predicting $2000 plus gold for this year are just kidding themselves. Gold is almost certainly going to be locked in a very choppy, extended trading range till at least the fall and probably into next spring before the next C-wave can breakout to new highs.

As distasteful as it is, investors need to accept the fact that it’s going to be very hard to make money in the precious metals sector this year, and the only way to do so will continue to be with short-term trading strategies until we have confirmation that the dollars three year cycle has topped.

At the moment precious metal investors have the guillotine of the stock market hanging over them just like everyone else. Historically the selling pressure from an intermediate degree decline in the stock market will force an average decline of about 19% from peak to trough in mining stocks. Right now the mining sector is in a weakened state with the HUI holding below a declining 200 day moving average. That’s not exactly the best position to weather the intense selling pressure generated by an intermediate degree decline in the stock market.

My advice for precious metals investors is the same as it is for everyone else. Go to cash and be prepared to buy when the stock market puts in an intermediate bottom in late February to mid March.

329 thoughts on “DANGEROUS TIMES AHEAD”