In last week’s article “Three Weeks Left” I outlined a brief synopsis of what I was expecting based on how the daily cycles were unfolding. So far markets are playing out pretty much as anticipated.

This week I’m going to go a bit more in depth and tie cycles analysis with the upcoming fundamental calendar, namely the next two FOMC, and Jackson Hole meetings.

As you may recall from the last article, the dollar index is in the process of moving down into an intermediate degree bottom, which in turn is triggering a rally in virtually all risk assets, most noticeable in the energy and grain sectors as the CRB exploded out of its three year cycle low.

I think we will probably see the dollar continue to drift generally lower for most of the remainder of this month, possibly even into the Jackson Hole meeting as traders continue to hope for the next round of QE.

When the Fed fails to deliver, which they almost certainly will, we should see the market start to move down into its daily cycle low, which coincidentally is due almost exactly on the September FOMC meeting. 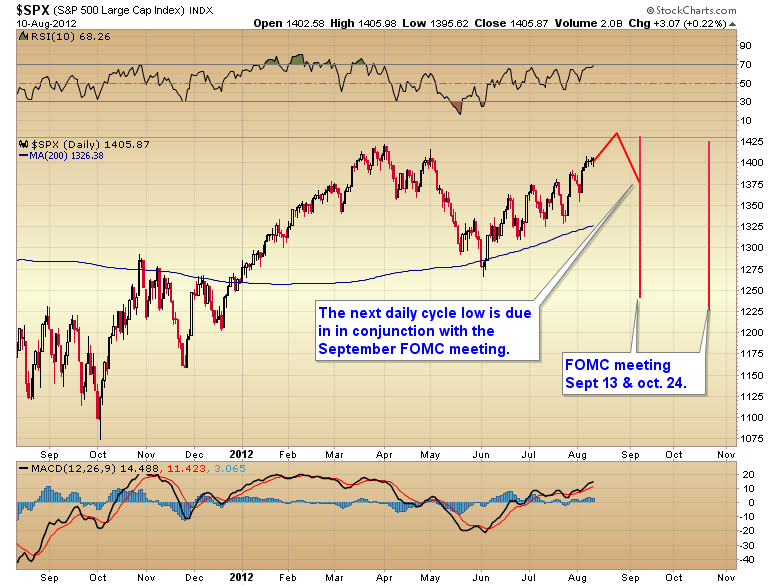 The September FOMC meeting will be the opportunity for the Fed to shorten the stock market intermediate cycle and possibly abort most of the move down into the yearly cycle low due in October. However I think the Fed is probably going to balk at the September meeting also, and when they do it will initiate the real move down into the normal timing band for an intermediate, and yearly cycle low in late October, or early November.

I suspect that the Fed will finally cave at the October meeting and begin an open ended QE with the misguided goal of achieving a nominal GDP target and lowering the unemployment rate. The one caveat would be that the Fed meeting in October would call for a slightly short stock market daily cycle, which is not unusual if the market is experiencing a hard decline.

Another possibility, although one with lesser odds in my opinion, would be a final intermediate, and yearly cycle low on the November employment report, or the presidential election results which would stretch out the daily cycle to its normal duration of 35-40 days.

Based on the current cycle count, and taking into account the timing band for the next two FOMC meetings, and the dollar’s current intermediate cycle we should trigger a top in the stock market sometime around the end of August. However let me warn bears that the move down into the intermediate bottom is not going to be an easy short. I expect we will see most of September chopping back-and-forth with several retests of the highs before finally rolling over. Most of the losses will probably come in the final 5-10 days before the bottom. Like I said not an easy market for bulls or bears either one.

Gold is a bit of a different animal than the stock market and its intermediate cycle has a different duration. But gold is still tethered to the dollar index as it continues working through the consolidation phase of this new C wave. Here is a chart I posted back in February depicting the extended consolidation that I was anticipating this year.

Considering that gold is still in this consolidation phase I think we are probably going to see a test, or more likely a break of the D-Wave trendline as the dollar completes its move down into its intermediate cycle low later this month. That should be followed by an intermediate decline that should bottom ahead of the stock market in mid to late September. 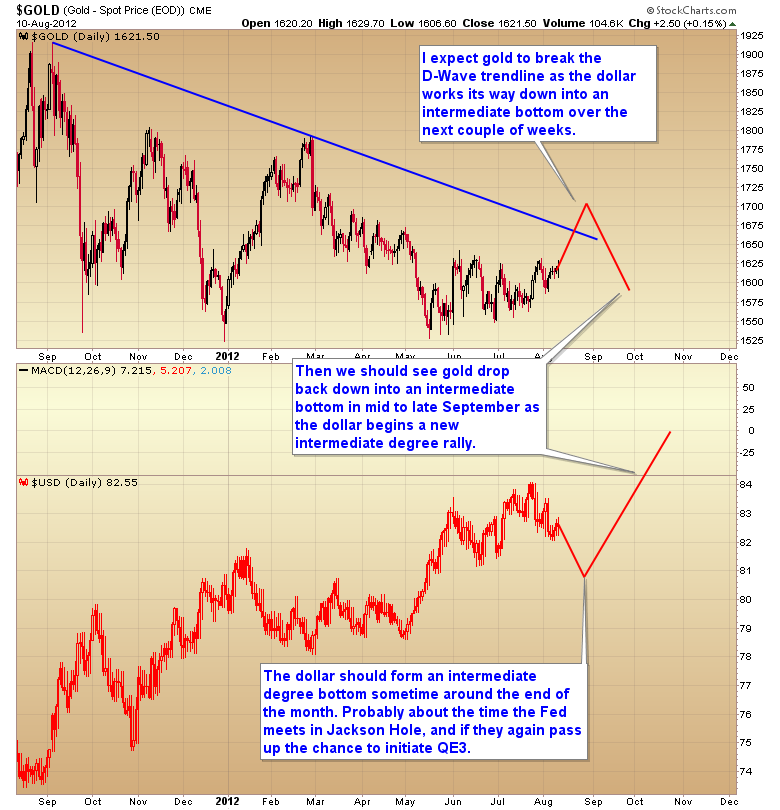 At that point I suspect gold will start to sniff out the next round of QE and will begin to resist the remainder of the dollar rally, very similar to what happened between May-July.

Open ended QE, which I expect to begin at the October FOMC meeting (there is a small chance that the Fed will act early in September), is going to be the driver of what should be an inflationary spiral, culminating with a parabolic move in the CRB and the next leg up in the secular gold bull (probably to $3500-$4000) as the dollar drops down into its next three year cycle low in mid-2014.

162 thoughts on “BULLS STILL IN CONTROL, BUT TIME IS RUNNING OUT”