Just a quick post today illustrating what I expect over the next 2 years, and the intermarket relationship between the currency markets, CRB and stocks.

Stocks are driven by not only the dollar but to some extent by commodity prices. When commodities start to surge too high they act as a drag on the economy and consequently the stock market begins to stagnate. When commodities are falling, like they have been for the last year, it tends to act as a mild tailwind for the stock market, which explains why stocks have continued to rise for most of this year despite the dollar moving generally upwards since February.

I think I have mentioned before that virtually every recession since World War II has been preceded by a spike in oil prices of 80%-100% over a short period of time (usually a year or less).

The surge from $50 a barrel to $100 in 2007 was the straw that broke the camels back and tipped the economy over into recession, which began in November 07. A further spike to $147 a barrel the next summer guaranteed that the recession would be the worst since the Great Depression, especially considering that the real estate market and debt bubble was imploding at the same time.

If the intermarket relationships continue to hold up, and I don’t see why they wouldn’t, then we should see commodity prices moving generally north for the next couple of years until the dollar forms its 3 year cycle low in mid-to-late 2014. At some point along the way rising commodity prices are going to begin pressuring the economy, just like they did in 2007 and 2008, and also in 2011 as the CRB surged up into its final three year cycle top. 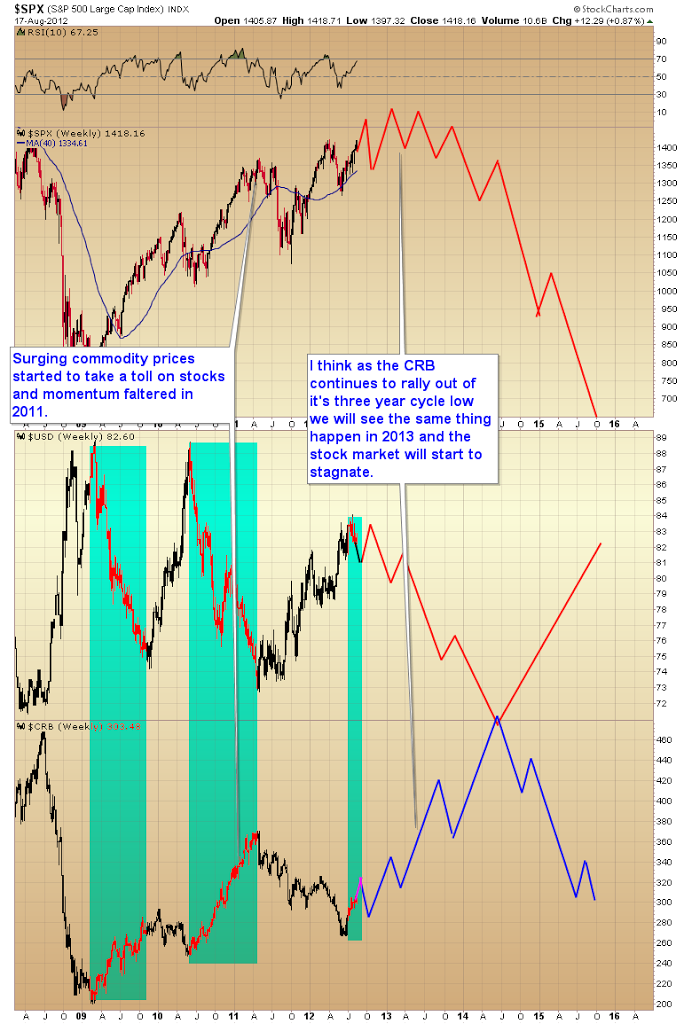 My current guess is that we will see the stock market start to stagnate in 2013 forming a very extended rounded topping pattern. By late 2013 the stock market should be clearly in a new bear market that will begin to accelerate to the downside as commodities spike into their final top as the dollar bottoms in 2014.

At that point I expect to see a severe deflationary event as the stock market and commodities collapse, similar to what happened in the fall of 2008 and early 09. This collapse and deflationary event should be accompanied by the dollar rallying out of its next three year cycle low in 2014.