According to recent statements by Bernanke, the Fed stands ready to act with further easing of monetary policy (QE3) if economic conditions warrant it. But let’s face it, because the Fed has never been audited we only receive the data they deem fit to publish. We know the government lies to us about inflation, unemployment, GDP, etc. Does anyone really believe the Fed is publishing true accounting numbers? I’m starting to suspect Bernanke has already begun the next round of quantitative easing.

Politically QE is a hot potato, and impossible to publicly announce. But there have been enough hints (the last FOMC minutes maybe the loudest) that it is clear that Bernanke intends to print. Hey, we are in a currency war after all, and one can’t win the war if you don’t shoot your guns!

First case in point. The CRB exploded out of its three year cycle low in June just as I had predicted. Oil is already knocking on the door of $100 a barrel again. Grains in many cases have rallied 50% or more and show no signs of reversing. As a matter of fact, the CRB is showing no inclination to even retest the summer bottom. The complete failure up to this point of commodities to retest the three year cycle low is of itself a warning bell that something has changed. I think we can all agree that the global economy didn’t all of a sudden ratchet into high gear, creating a surge in demand. Barring that, the only thing that would generate this kind of explosive move without even a hint of a correction would be another round of massive liquidity injections.

Another odd development is the action in bonds. A month and a half ago the bond market started to discount the inflationary surge as commodities launched out of their three year cycle low. Mysteriously, two weeks ago, interest rates started to tank. 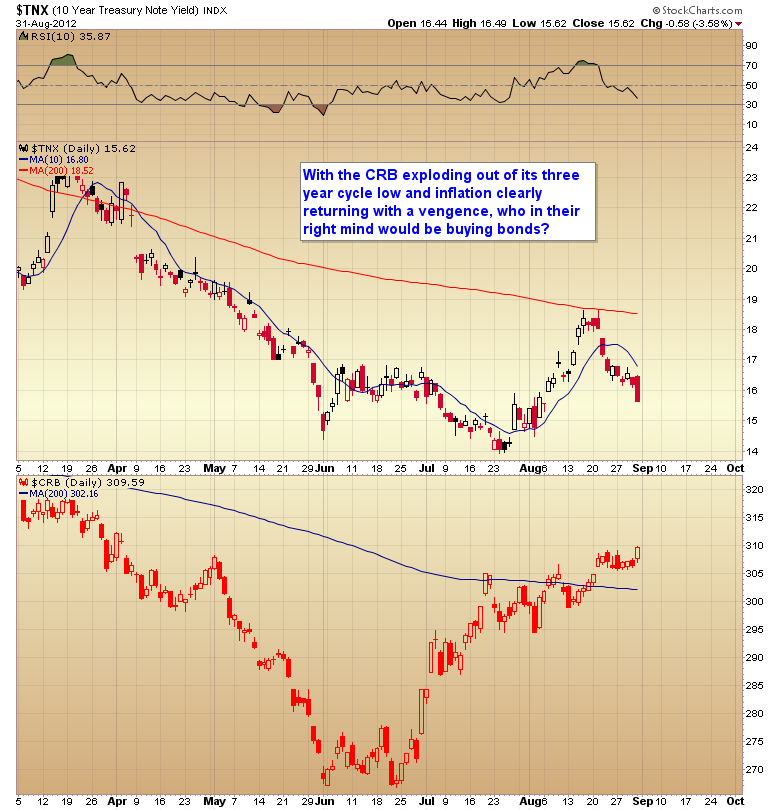 One has to ask themselves, who in their right mind would be buying bonds with a negative yield in a rapidly accelerating inflationary environment?

This sudden reversal in interest rates is another warning bell, in my opinion, that QE3 may have already begun, and Bernanke is already buying bonds in the attempt to hold interest rates under 2%.

The next confirmation will come from the stock market. As we have seen in the past, the daily cycle in the stock market has tended to stretch far beyond its normal timing band (35-40 days) during periods of quantitative easing. The current cycle is due to bottom right around the next Fed meeting on September 13. If stocks are still rising with no clear decline into a cycle low by mid-September that would be a pretty clear sign in my opinion that Bernanke is lying to us and QE3 has already begun. 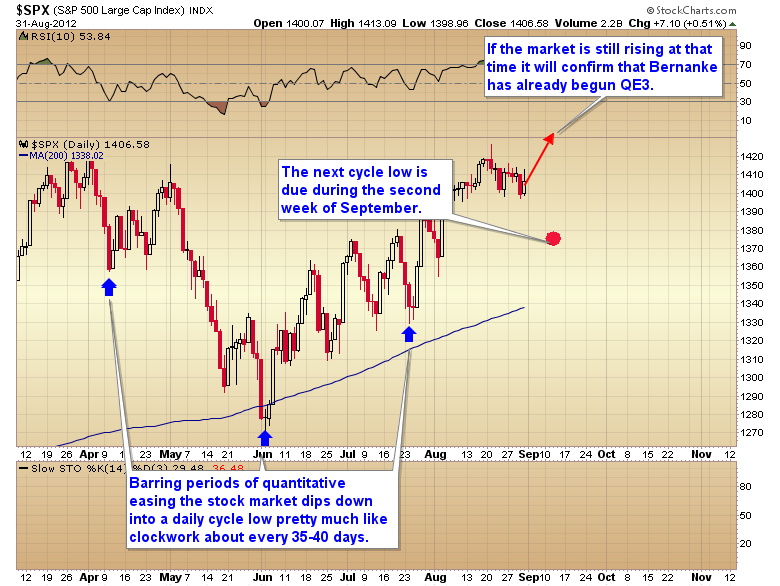 If I am correct then the penetration of the three year cycle trendline by the dollar index on Friday is going to be a harbinger of hard times ahead for the world’s reserve currency. 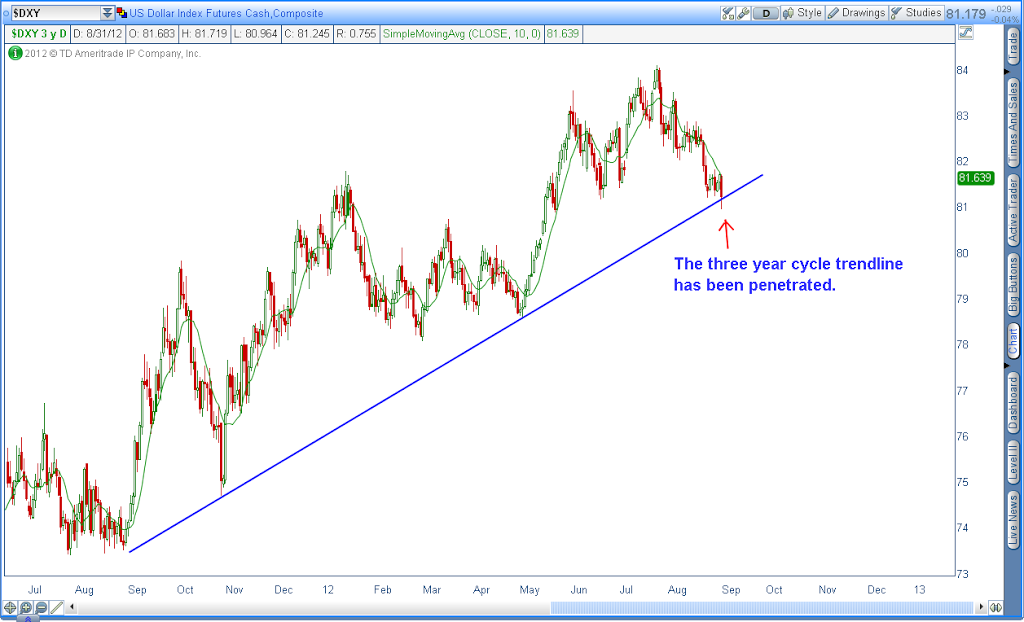 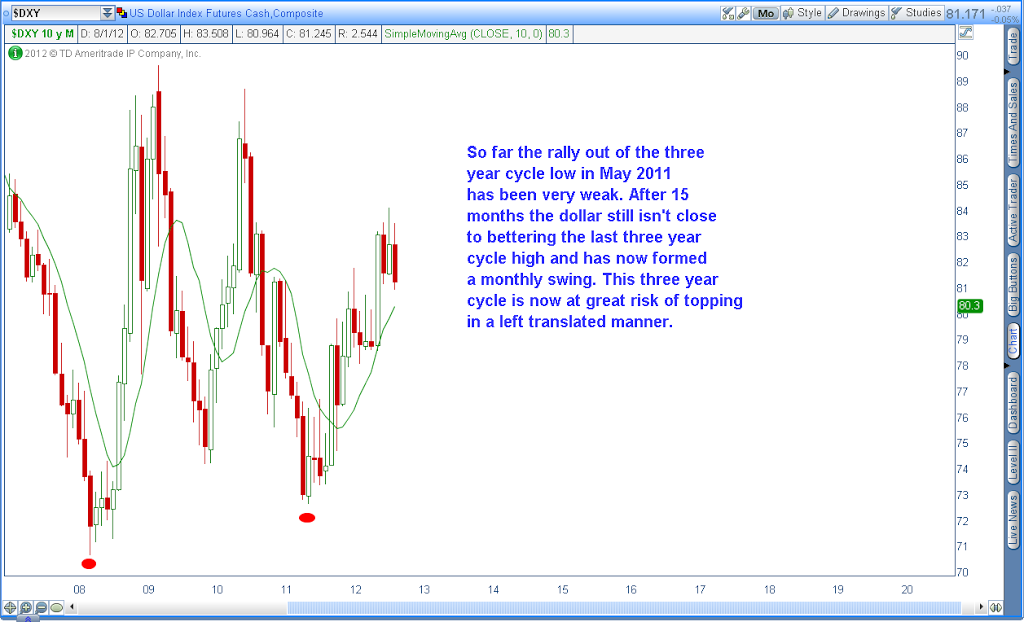 The dollars three year cycle is now at risk of having topped in only 14 months in a left translated manner. If so, this greatly increases the odds that we will see the dollar index fall below 72 and probably below 70 by the time the next three year cycle bottoms in mid-2014.

If the dollar’s current daily cycle continues to drop all the way into the FOMC meeting on September 13, then it will be unlikely we see any significant corrective action in commodities or stocks for the next two weeks, and at that point I am going to seriously entertain the idea that the Fed is lying to us and has already begun the next round of bond purchases.

The big question though, is how do we invest based on this possibility?

First off one doesn’t want to be short if there is even the slightest risk that the Fed has resumed bond purchases. Second, one has to ask themselves which sector stands to benefit the most from another massive increase in liquidity?

The obvious answer is commodities. But most commodities have already rallied quite significantly as we’ve seen with the grains and energy. That doesn’t mean there isn’t more upside, I’m sure there is. But I think much larger percentage gains are going to be made in the precious metals as price and breadth are still quite depressed in this sector.

The metals are now set to “catch up” as traders take profits on some of their other commodity positions that have already generated large gains, and look to put that capital back to work in undervalued areas with more upside potential (precious metals, especially miners).

It’s been my theory for several months now that we saw a B-Wave bottom for gold back in May. 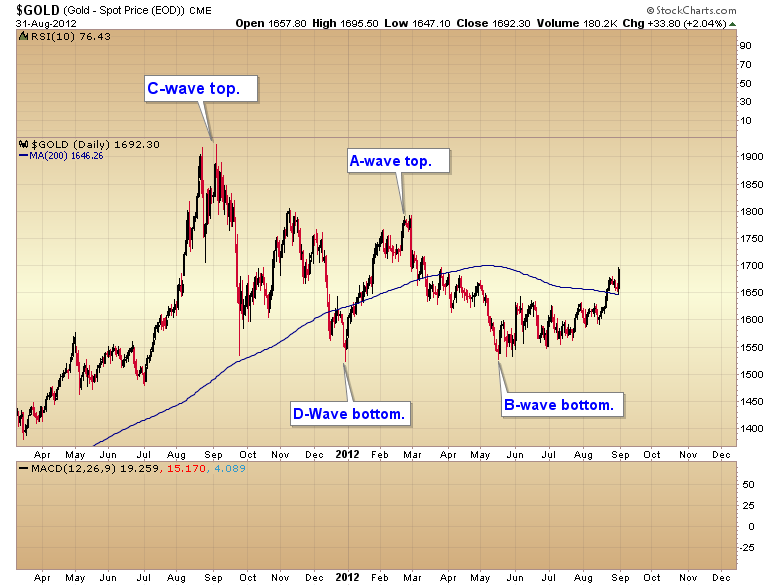 With the recent breakout of the frustrating consolidation zone that always follows a B-Wave bottom, I think gold is now ready to begin the initial phase of the next C-wave advance. 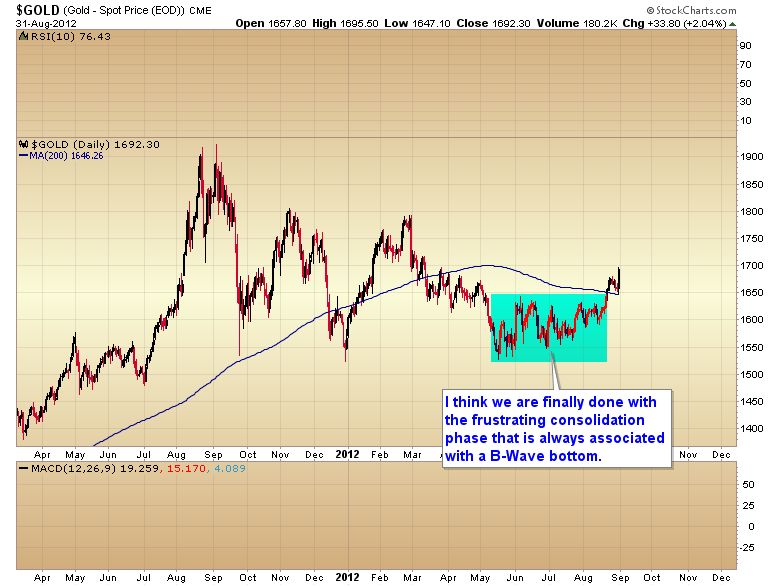 Gold is now entering the high demand fall season. It has been my expectation that gold will generate its first test of the all time highs sometime this fall. If my intermediate cycle count is correct (explained in depth in the nightly premium newsletter) we should see a move above the A-wave top of $1800 and a rally close to $1900 by late October or early November. At that point the intermediate cycle will enter the timing band for the next corrective move, which should prevent gold breaking out to new highs 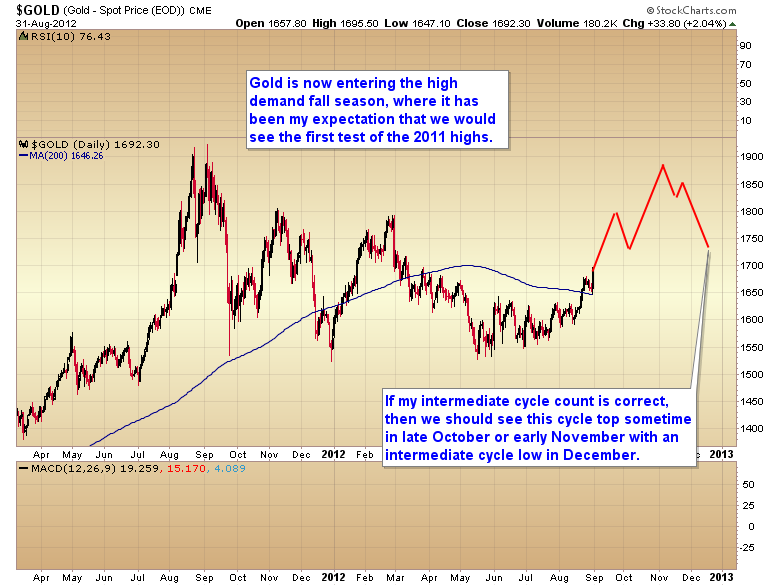 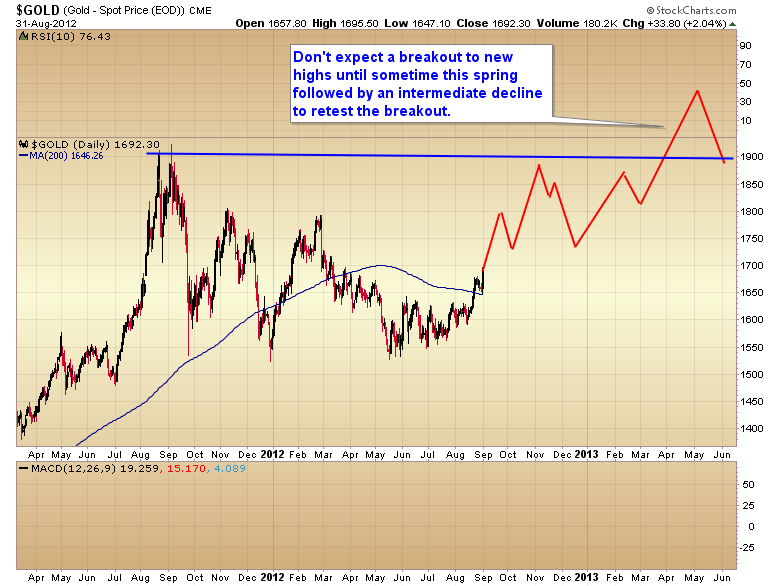 Yes I know these daily and intermediate cycle counts are some what complicated and beyond the scope of this short article. I do cover them extensively in my premium newsletter. Suffice it to say that cycle analysis lays a general guideline for when to expect major bottoms, and to a lesser extent tops. I like to think of it as a tool that signals when to step on the gas and when to start tapping on the brakes.

While I don’t think gold has much chance of moving above $1920 this year, conditions are definitely in place for a significant rally in the sector over the next couple of months. Miners, and silver in particular, have the potential to generate some pretty respectable gains over the next 2-3 months.

200 thoughts on “HAS QE3 ALREADY BEGUN? COMMODITIES AND GOLD MAY BE SAYING YES.”