In my last couple of articles I mentioned that I was waiting for the S&P to form a swing low as the first confirmation that an intermediate degree bottom had formed. That swing is going to form on the open Monday morning.

Typically the stock market will rally fairly aggressively out of one of these major intermediate bottoms, often gaining 6%-8% in the first 15-20 days. At that point the market will dip down into a half cycle low that will establish the trend line for this particular daily cycle.

Since the dollar is now on the 21st day of its daily cycle it is now overdue for a move down into a short-term low. This should drive the first half of that 6%-8% move, followed by a very short corrective move as the dollar bounces and then rolls over quickly into a another leg down.

That cycle would be due to bottom around the first of the year, and should drive the stock market generally higher until early January at which time we should get a more significant correction, probably as nervousness builds before the next earnings season.

I’ve diagrammed the general directions and rough targets for what I think will unfold over the next month and a half in the chart below. 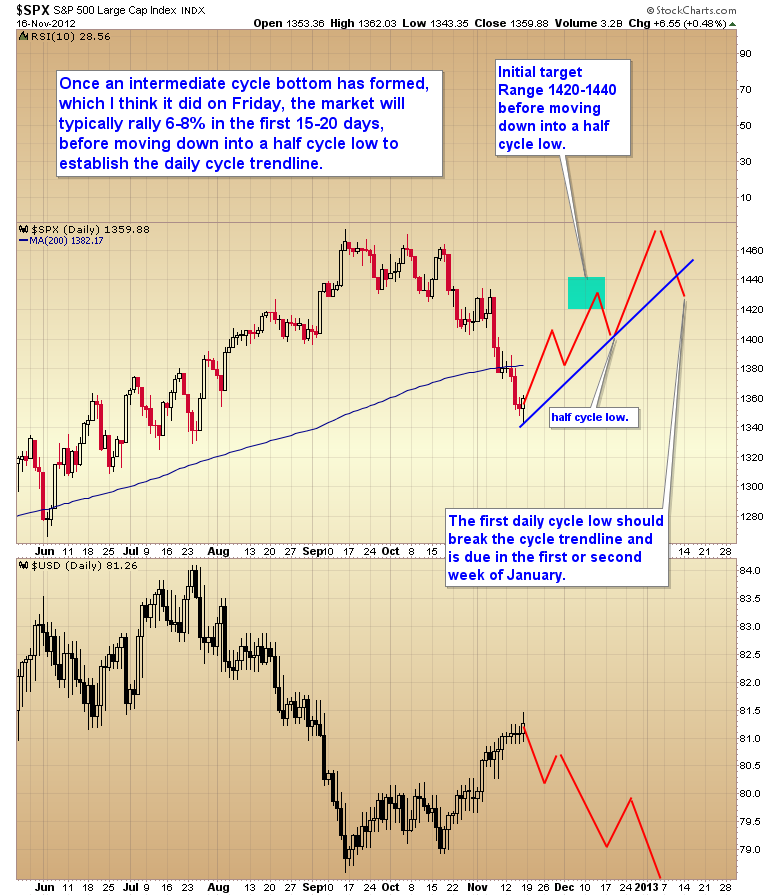 However, the dollar shouldn’t put in the true yearly cycle low until sometime in mid February to early March so there should be another leg down after the one bottoming in January.

The final leg down on the dollar index into its yearly cycle low should drive the stock market back to at least marginal new highs later this spring. 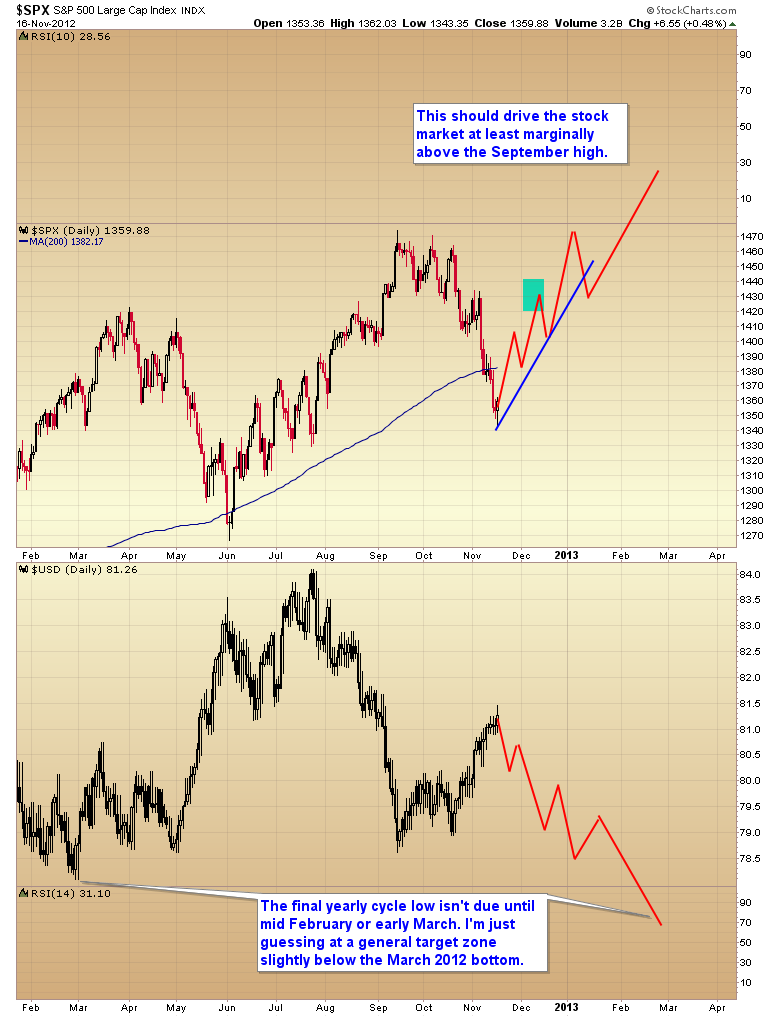 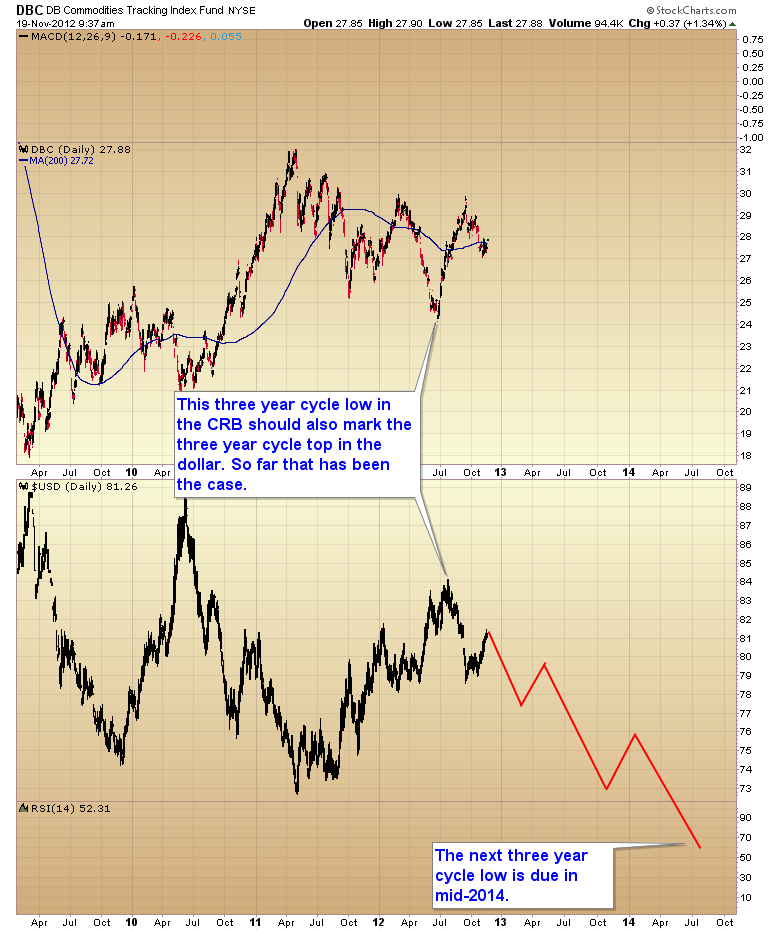 We should continue to see the dollar generally heading lower with intermittent bear market rallies until it puts in a final three year cycle low in mid-2014. This should keep the stock market generally moving higher at least until the point where commodity inflation, especially energy, gets to the point it collapses consumer spending. Once that occurs the stock market will start to stagnate and refuse to rise even if the dollar continues to fall. If Bernanke didn’t learn his lesson in 2008 he will continue to print and spike inflation even higher creating the conditions for the next recession.

As has been the case in the 70s and also during the last cyclical bull market in 2007, I think we will probably see the stock market at least test the all-time highs, if not a marginal break above them, before rolling over into what I expect will be a very complex bear market bottoming sometime in 2015. 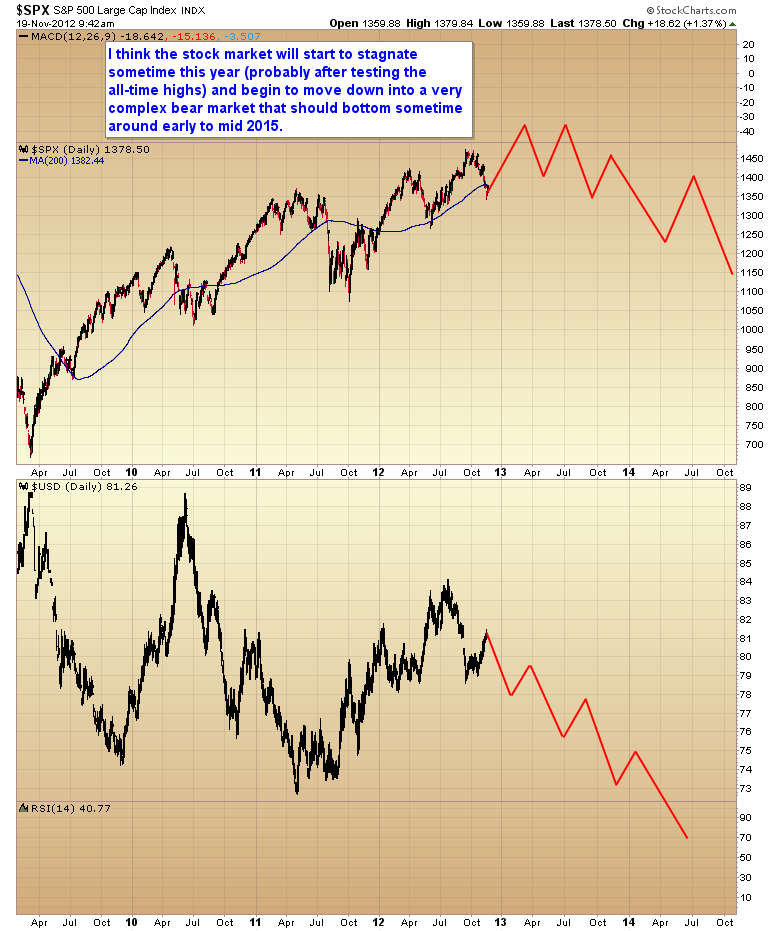 Today should be the opportunity to get on board what is likely to be a significant rally over the next 3 weeks and probably a move to new highs over the next 2-3 months.

However I think the really big money will be made in mining stocks as gold should rally enough to make it’s first test of the all time highs at $1900. It’s not unreasonable to think miners will follow and test 640 during this time. 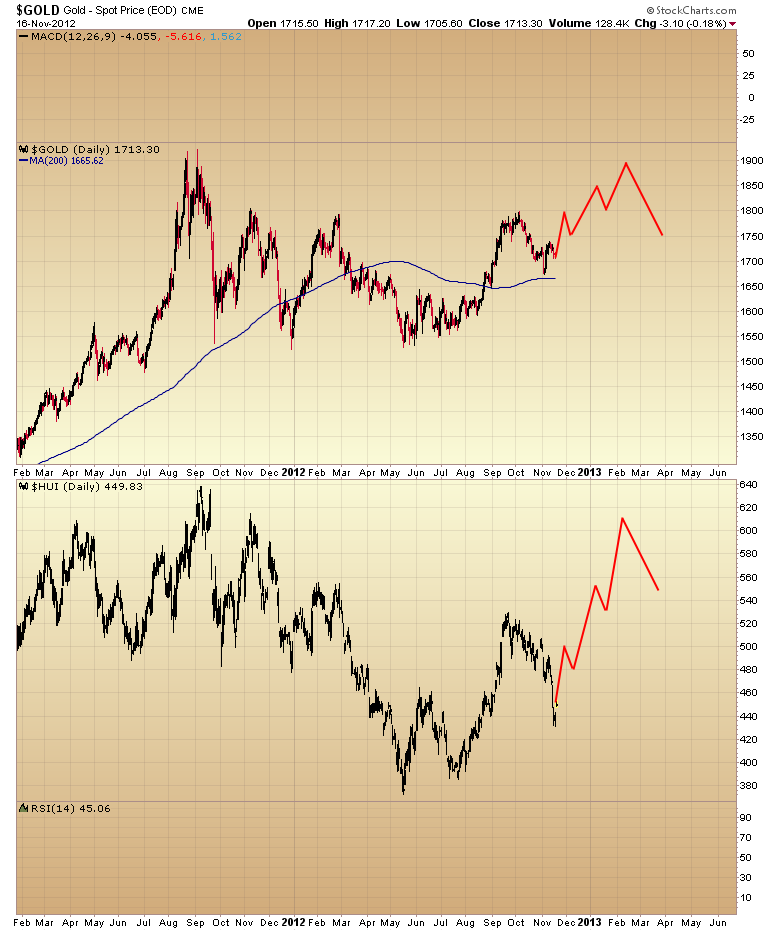