For months and months now I’ve been warning traders that QE3&4 were going to have a major effect on stocks. I knew that analysts claiming that each new QE was having less and less affect would not apply to this latest round of quantitative easing.

I was confident the latest counterfeiting operation by the Fed would push stocks to at least test the 2007 highs, and I really expect we will see a marginal break above that level sometime this year. Probably by the end of the month. My current guess is that we will get a sell the news type of event as soon as the sequestration can is kicked down the road and that will mark the top of this particular intermediate cycle.

Make no mistake though we are still in a secular bear market. Stocks are testing their all-time highs at the same time earnings are in decline, GDP has turned negative, and unemployment is starting to tick up.

It has been my expectation that the stock market would put in a final top sometime this year. I also expect this will be a very extended and difficult topping process lasting months if not a year or more. 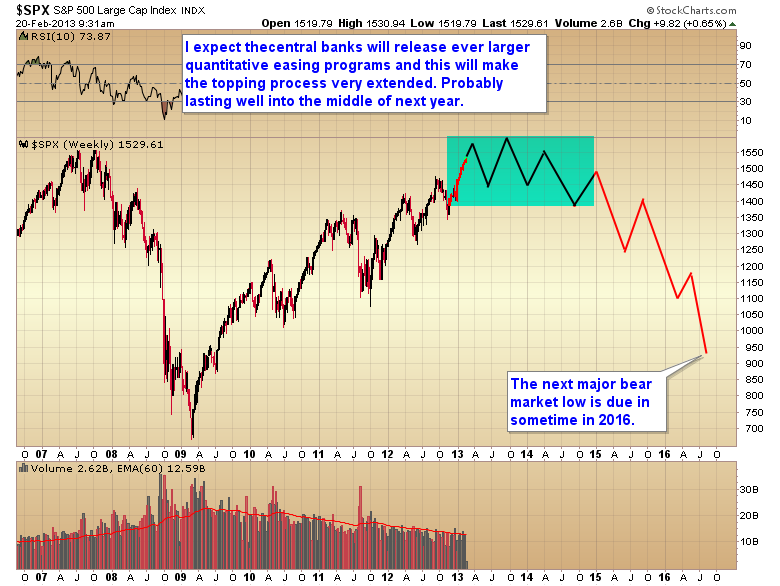 During this topping process I expect to see an inflationary surge very similar to what happened in the oil markets during the 2007 top. 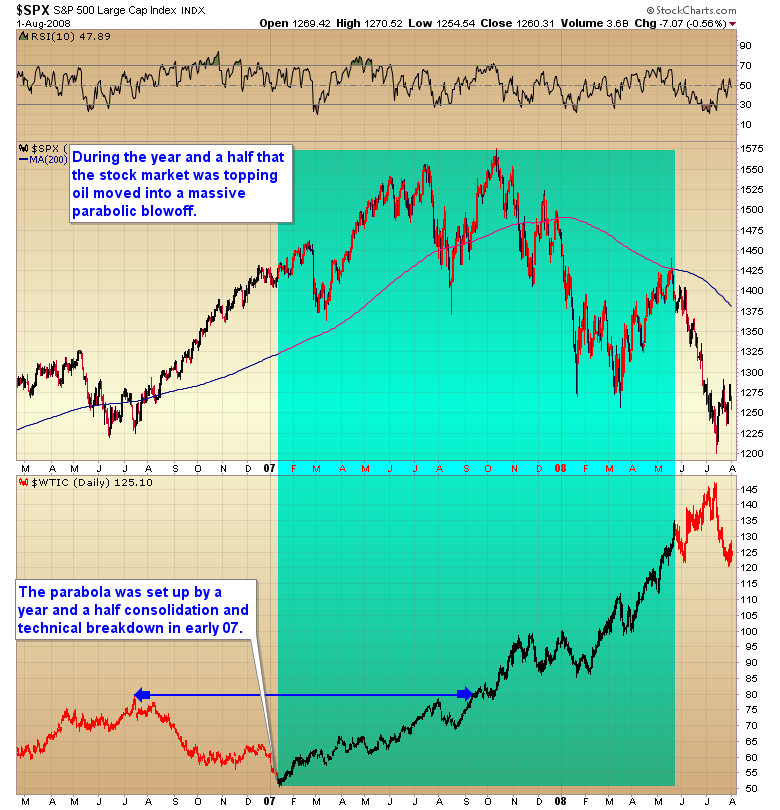 Notice the breakdown in early 2007 that convinced everyone that the bull market in oil was finished. This set up a massive parabolic move into the 2008 blowoff top.

This time however I don’t think it’s going to be oil leading the inflationary charge. In order to generate that kind of move we need something that has formed a long consolidation similar to what happened in oil, and preferably an asset that has declined long enough and far enough to push sentiment to negative extremes capable of convincing everyone that the bull market is over. Those are the conditions necessary in order to generate a massive parabolic move over the next two years.

The only asset that qualifies in my opinion is the precious metals markets. 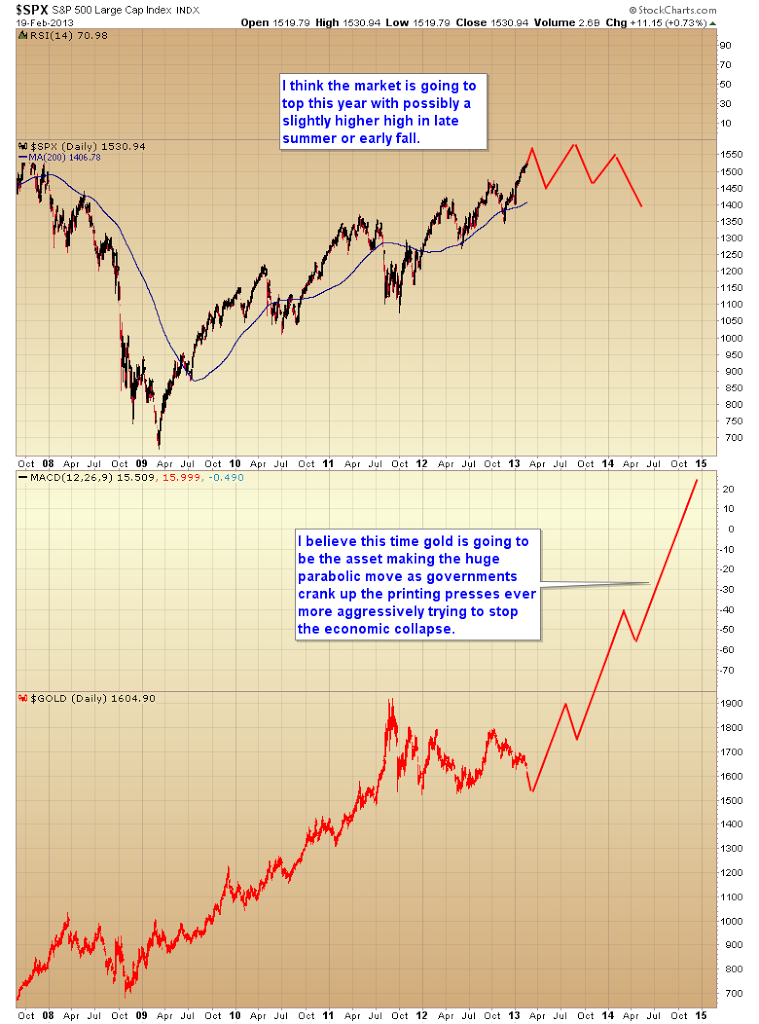 The breakdown after the QE4 announcement, and now the extreme move into a yearly cycle low has, I daresay, convinced everyone that the gold bull is over. I would argue that it is impossible for the gold bull to be over as long as central banks around the world continue to debase their currencies. Gold is just creating the conditions necessary for its next leg up, similar to what oil did in early 2007.

A very similar pattern to what happened in oil is also unfolding in the gold market. I’m talking about the T-1 pattern that formed in oil during 07-08.

Here are the rules of T-1 pattern for those not familiar: 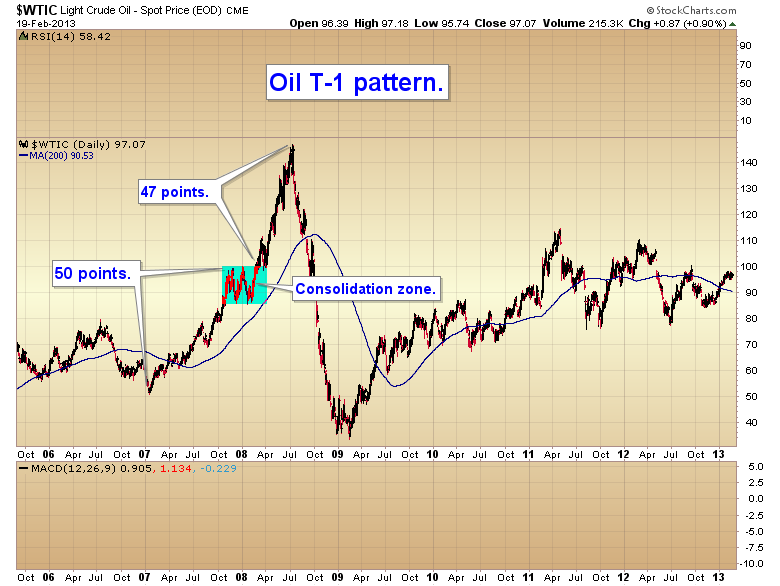 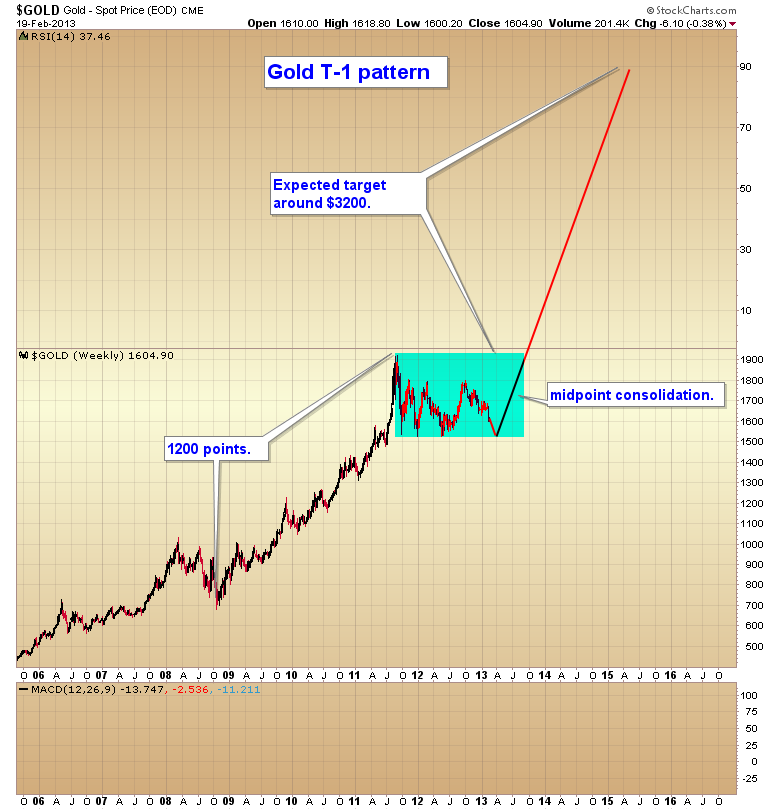 Investors just need to get through the bottoming process of this yearly cycle low. Considering that gold is now on the 15th week of its intermediate cycle, which usually lasts about 18-25 weeks we should be getting close.

Actually we are probably closer than it appears by that previous statement. The last intermediate cycle ran a bit long at 25 weeks. Long cycles are usually followed by a short cycle. So I would expect this cycle to run a bit short at 16-18 weeks.

All in all, I expect a final bottom sometime in the next 5-10 days. And once that bottom has formed gold should be ready to break out of the consolidation zone it has been in over the last year and a half and get busy delivering the second leg of that T-1 pattern.