I’ve been pointing out for several months now that the recent rally in the dollar was a mirage, an illusion generated by the yen, euro, pound, and Canadian dollar all dropping into yearly, or intermediate cycle lows together. This selling pressure in the four major currencies that make up the dollar index spawned what looked like a strong dollar.

With Bernanke printing 85 billion of them a month, there is no such thing as a “strong dollar”. I’ve been saying for months that once these four currencies completed their bottoming cluster it would be the dollar’s turn to crash. The recent collapse in the yen was 23%. The Pound 9%. I think the dollar will be somewhere in between with a loss of 9-12% as it drops down into it’s yearly cycle low.

As this process starts to accelerate over the next couple of months the dollar bulls are going to get a rude awakening, as our currency shows it’s true colors. The acceleration began today as the dollar has now completed a lower low and a lower high. 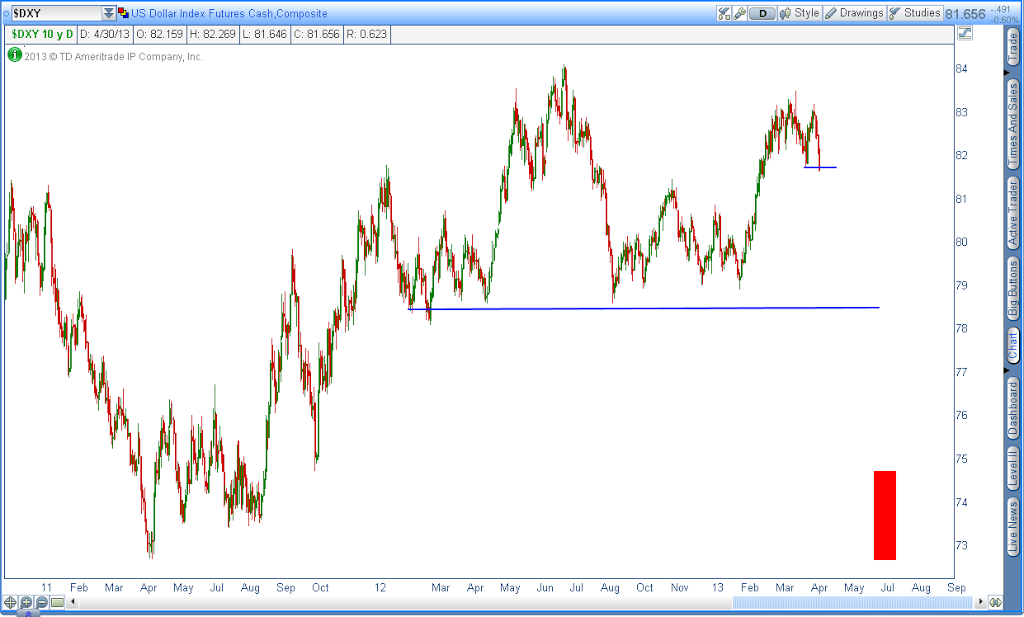 Once major support is breached at 78.50 there will be nothing to stop, what I think will be a waterfall decline, until the dollar reaches the 73-75 zone.

And don’t forget this is just the beginning. The much larger degree, 3 year cycle low, isn’t due until late next year.

It’s time for the unintended consequences of QE infinity to come home to roost.

This should drive either another C-wave in gold. Or as I’m now starting to believe, gold may be in the initial stage of the bubble phase of the bull market. 2015 will be 15 years. That’s about a normal duration for a secular bull run.

Let’s face it, commonsense would tell most people that you can’t just print 85 billion dollars a month and not have something bad happen. The last time the Fed embarked on this kind of insane policy it was during the real estate bubble implosion. Instead of rescuing the housing market the Fed drove oil to $150 a barrel and spiked food prices around the world, triggering riots and wars in many third world countries.

I expect the same game plan this time is going to reap the same results.

We have all the ingredients in place. Gold has probably completed it’s yearly cycle low. The COT is showing a max bullish position by commercial traders. Before every bubble phase there is always a devastating correction that convinces everyone that the bull is over. I would say that describes pretty much what has happened over the last 6 months.

And to top it all off the recent manipulation to run the stops below $1523 has triggered massive shortages in the physical market, especially in silver.

Now add to that a collapsing dollar over the next year and a half and everything is in place for gold to generate at the very least another C-wave advance and in my opinion we probably have the conditions necessary for the bubble phase to begin.