The euphoria phase of the bull market that I warned about months ago is now beginning its final parabolic phase.

I’m guessing we still have another month-month and a half before this runaway move finally ends. Depending on how far above the 200 day moving average it ends up stretching, I think there’s a pretty good chance we will see the entire intermediate rally wiped out in a matter of days or even hours when this house of cards finally comes tumbling down. 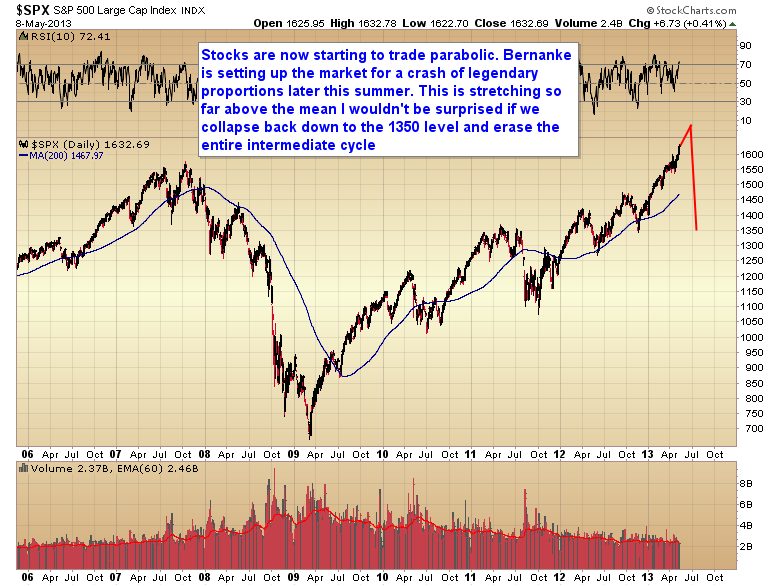 That is how these runaway moves terminate. They crash! Parabolas always crash.

These things can go on and on for months and months with savvy investors becoming more and more nervous the longer the move persists. The longer the trend continues the more professional traders all position right next to the exit, until finally one day everybody tries to get out the door at the same time. It’s that mass exodus to lock in profits that triggers the crash. The magnitude is determined by how far and how long the market stretches above the 200 day moving average.

Markets are no different than a pendulum. They oscillate back-and-forth above and below the median line, which in this case is the 200 day moving average. Bernanke is not doing anyone any favors by stretching the market unnaturally far to the upside. All it is going to do is guarantee an exceptionally violent move to the downside once the forces of regression to the mean break the parabola.

Again I would warn traders not to try and sell short as it’s virtually impossible to determine when the parabola is going to fail. My best guess is late June or early July based upon the normal timing band for the dollar index to form its next intermediate degree bottom. As I expect the crash to correspond with a dollar rally that would seem to be as good a guess as any.

For savvy traders the play isn’t to sell short, it’s to go long once the crash has occurred as the Fed will almost certainly double down on QE in the attempt to reflate asset prices.

Of course the real play isn’t going to be in the stock market. The stock market is in the topping phase of this cyclical bull market. Yes the Fed may be able to levitate stocks back to marginal new highs, but the real money is going to be in commodities as all that excess liquidity will inevitably make its way into the undervalued commodity markets where the potential return is many multiples greater than in a very mature cyclical bull market in stocks with a weakening global economy.