Many analysts lately have been calling for a top in the stock market. On the other hand I’ve been warning traders that what we experienced over the last three weeks was just a normal profit-taking event into a daily cycle low. These profit-taking events happen almost like clockwork every 35-45 days. I was expecting the bottom on either the retail sales or the Fed minutes last week. As it turns out the Fed minutes were the trigger to put in the bottom. 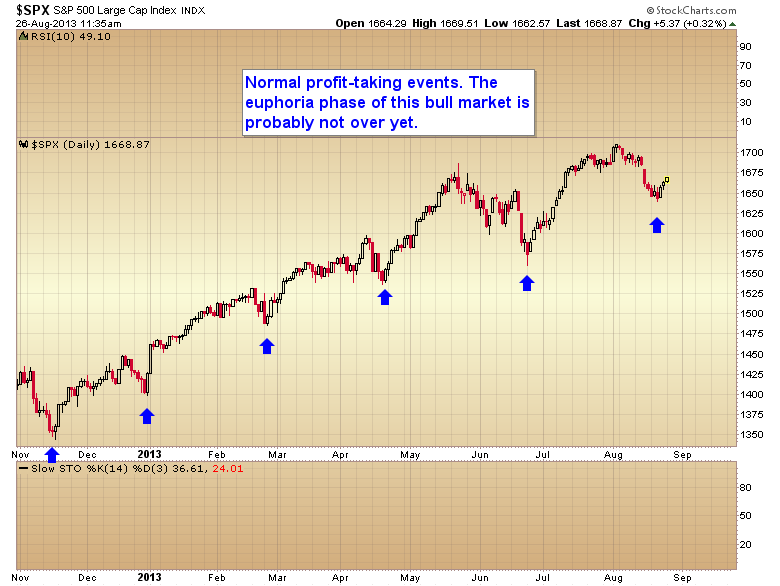 I told subscribers in the weekend report that I thought the Fed would use this low volume last week of August to drive stocks back above the 1680 resistance level and set the market up for a rally at least into the next FOMC meeting and maybe much further if the Fed abstains from tapering. As I have noted many times in the past, traders rarely come back from summer vacation in the mood to fight the trend. I’m pretty sure the Fed is going to make sure the trend is up as we begin fall trading.
On another note, I think the grains have confirmed a bottom along with the precious metals and energy. I believe the super spike in commodity prices that I have been expecting to begin this year and progressing into next year as the dollar puts in its three year cycle low has begun.
Over the next month or two I expect everything to rise, with the exception of the dollar and bonds.

Well after today it looks like we haven’t found that bottom just yet.