The answer to the question above unfortunately is maybe. There are definitely warning signs springing up.

The first sign of trouble popped up last week when the miners generated a key reversal on huge volume, and on a day when gold was actually positive. Something about that day smells very fishy to me. It looks like big-money traders had advance notice that a false breakout to new highs was going to be manufactured to give insiders an exit after a two-month 40% rally. The high-volume follow-through the next day confirms that something is not right.

For the life for me it looks like big money just manufactured a bull trap and set up an exit right at the top of the two month rally. 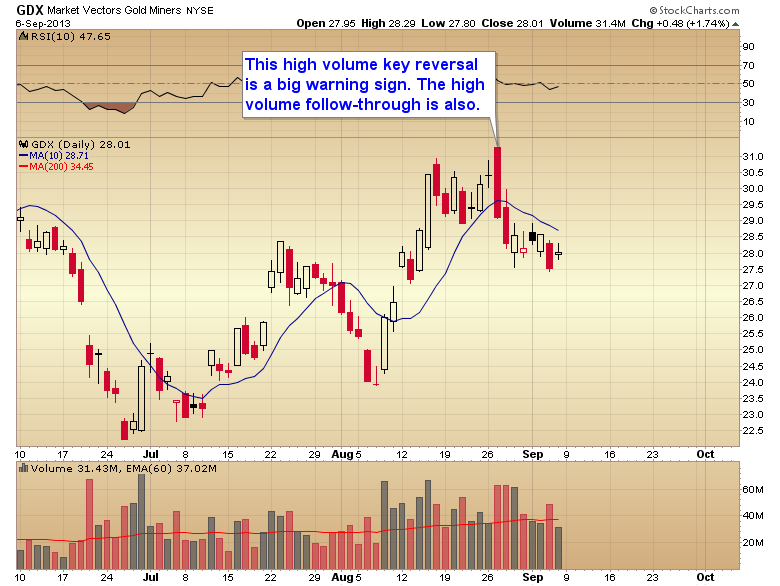 Looking at the weekly chart only confirms my suspicion. The last week of August was the highest volume week in history. When that kind of volume appears at the top of a two-month rally, after a 40% gain, there’s a good chance its signaling smart money just snuck out the back door. We should only see this kind of volume at the bottom of a serious decline, not the top of a two-month rally unless something is wrong. 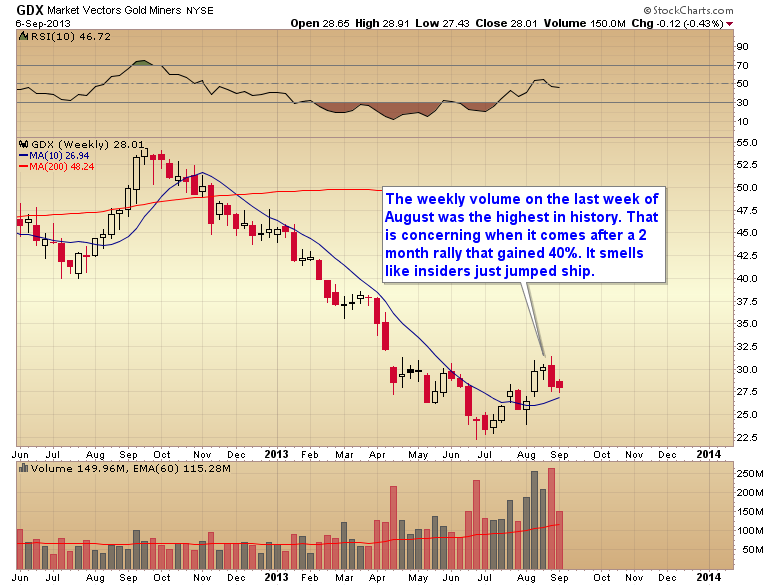 Another warning sign is the potential topping candle on the weekly charts followed by an indecision candlestick this week. 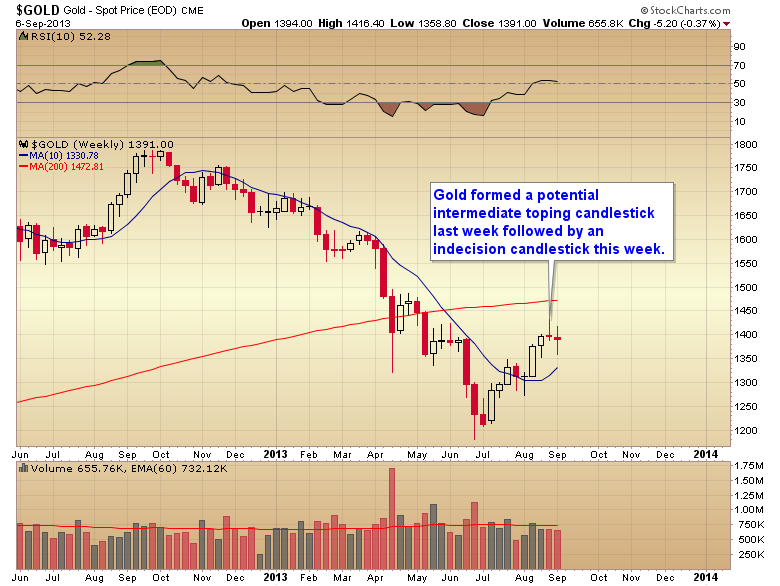 I’m starting to get quite nervous that this intermediate cycle topped on week nine and the bear raid is about to continue.

As most of you know I’m not a big conspiracy buff. Other than short-term stuff around options expiration, pretty much all of the pullbacks in this bull market can be explained away as normal corrective moves that happen in all bull markets. Unfortunately, this is not the case since last December. Nothing about the decline after the QE 4 announcement has been natural. first off, the intermediate cycle length was stretched ridiculously far, which would never occur during a down trend. During down trends intermediate cycles shrink, not stretch.

Sentiment extremes which would normally generate bear market rallies had no affect during this decline. The lack of any significant countertrend moves to relieve selling pressure during this bear market are another sign in my opinion that this was not a natural move.

And the repeated massive volume take downs in the overnight and pre market hours to push gold below significant technical levels to trigger stop loss orders would never occur if traders were trying to maximize profits. That 400 ton dump in the premarket on April 12th to run the stops below $1523 was so far from a natural market event it’s not even questionable that was blatant manipulation. 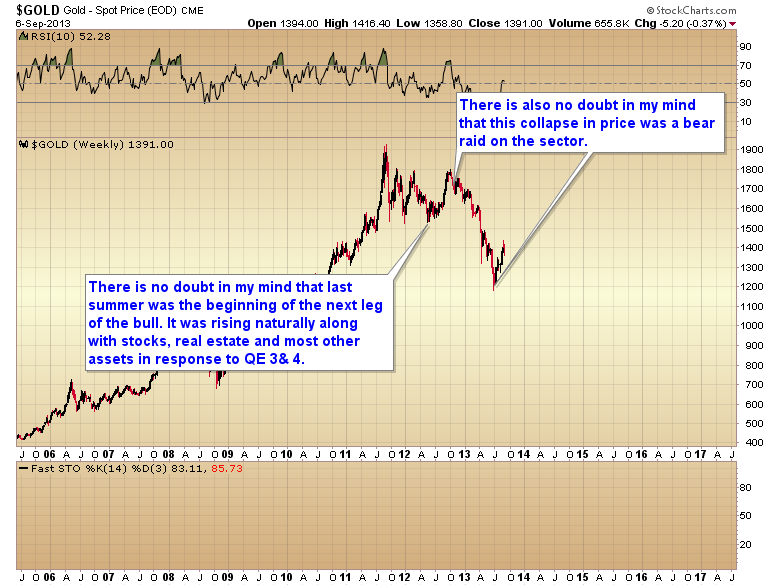 There’s no doubt in my mind that big-money knows gold is going to enter the bubble stage of this bull market sometime soon. What started out probably as an attempt to create a selling panic so Germany could get their physical bullion back, has now turned into a high-stakes game of let’s see how far we can lower the starting point before the bubble phase begins.

Considering the warning signs from the mining stocks last week and this week, I’m starting to get extremely concerned that the bear raid is about to resume. The first goal will be to take gold back down to test that $1179 summer bottom. If that bottom can be broken, (and if gold gets anywhere near that level I think we can automatically assume we’re going to see another massive contract dump in the overnight market to make sure it does get broken) gold will collapse in another waterfall decline all the way back to the prior C-wave top at $1030. 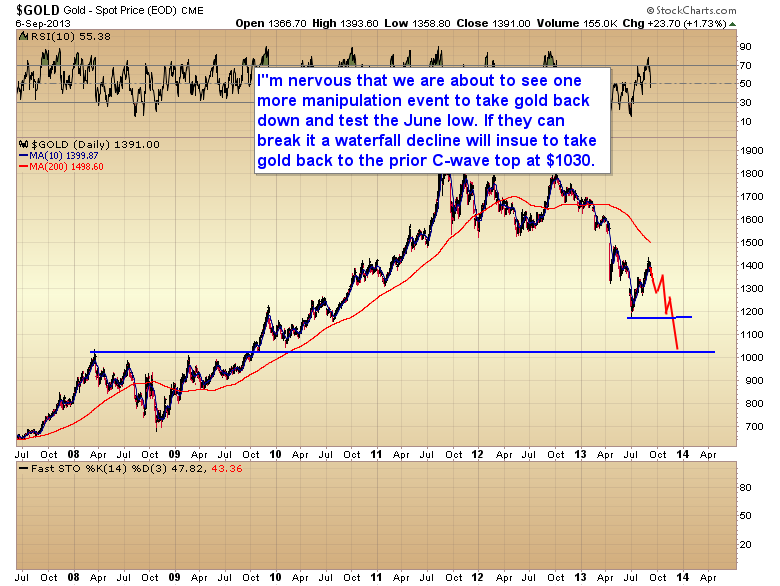 The next week or two are going to be dangerous in my opinion. If the bears can get some downside traction, traders need to get out of the way, get back to cash, and prepare to jump on board the bull at $1000 which I believe is probably the ultimate goal of this manipulation event that has been going on all year.

I advised subscribers to exit on Tuesday morning into strength based on these warning signals. We are now in wait and see mode in case the manipulation resumes. If it does, then we want to stay on the sidelines until the big money is finished jerking the sector around, and we want to re-board the train at the bottom along with the insiders who have manufactured this whole criminal process.