Unfortunately for the vast majority of traders, emotions are much stronger than logic. Most people when they see a market that has gone up for five years automatically assume that it’s going to continue to go up. And because everyone else is getting rich and they don’t want to be left out, they jump on board too.

In reality a market that has gone up for five years is all that much closer to a top and the upside potential is limited, not exponential. Unfortunately at market tops traders are unable to think logically and all they know is that the money is coming easy. Unfortunately when something is easy, it’s usually about over.

By the same token when a market has gone down for two years dumb money investors automatically assume that it will continue to go down for the foreseeable future. Let’s face it why would anyone want to buy something that is going down when you can buy stocks, that are going up forever, and get rich quick? (This is the same mentality that was prevalent in the real estate market in 2005/06.)

Again if one would stop and think logically, a market that has gone down for two years is all that much closer to a bottom. This is how smart money investors think, they think logically instead of emotionally.

In the chart below notice how the volume exploded at the 2009 low. This is a classic example of dumb money emotional selling, and smart money contrarian buying. Now after five years we have the exact opposite. Big money is slowly selling into the rally to the emotional dumb money investors. Volume is contracting. 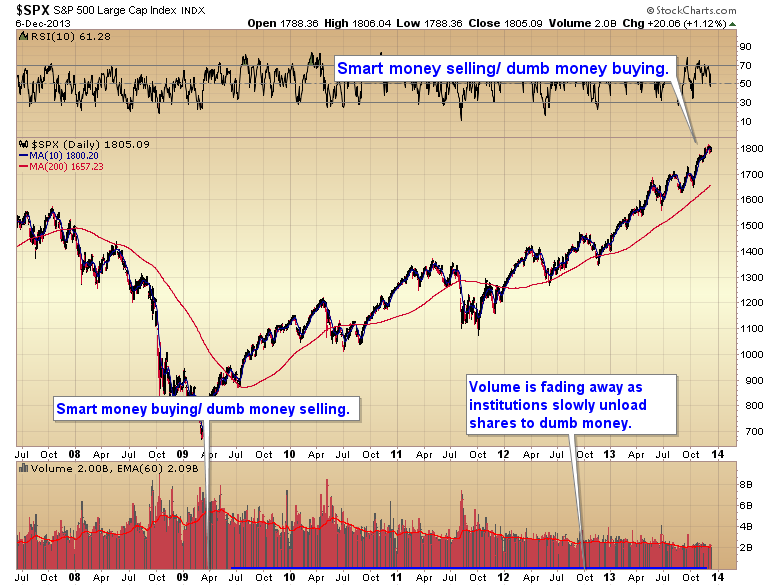 So if smart money is selling into the euphoria phase of this bull market, one has to wonder where they are putting their money. One need look no further than the closest bear market. 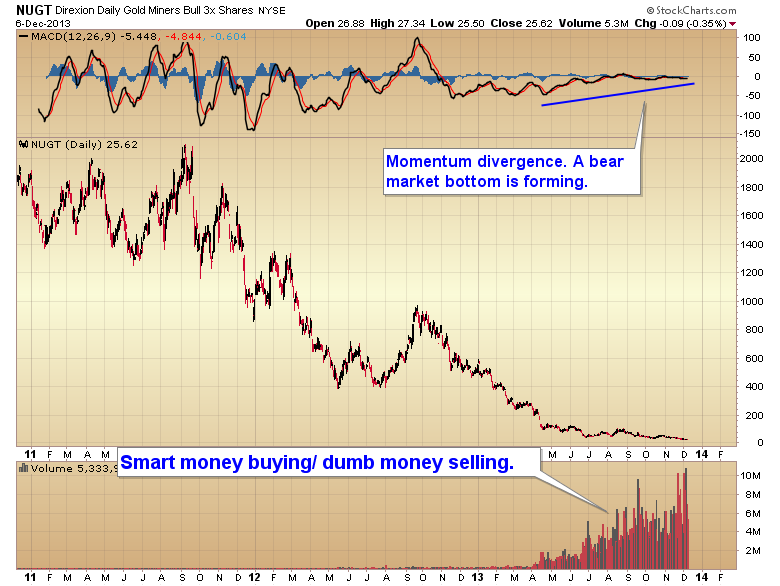 Smart money understands that all bear markets eventually come to an end. They understand that recency bias is a trap that catches investors at tops and prevents them from buying at bottoms. They control emotions, delay gratification, and understand that bear market bottoms are where the greatest buying opportunities in this business are generated. As you can see big money has been coming into this market since June in preparation for a bear market bottom.

I am cautiously optimistic that gold is in the process of completing a successful test of the June lows. If I’m correct then this will turn out to be one of the greatest buying opportunities of our lifetime. 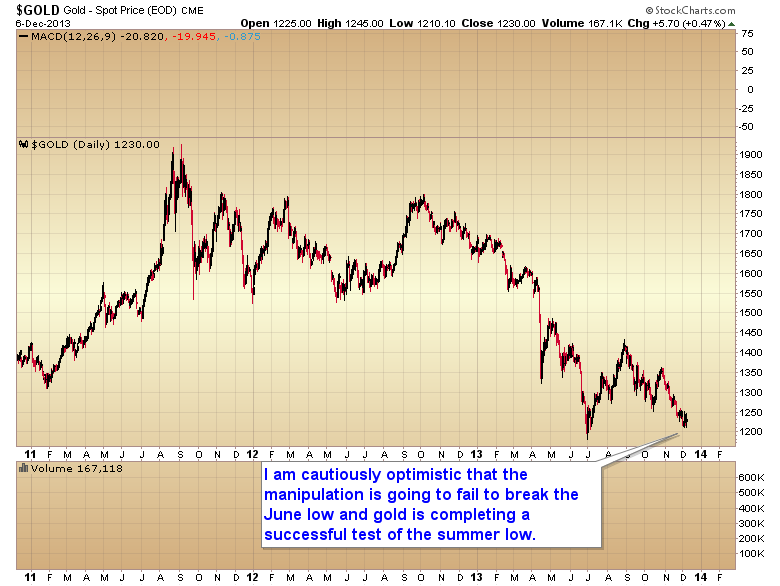 Let me stress that this isn’t the time to swing for the fences. Picking a bottom in a bear market isn’t easy. If you’re wrong and get caught in another leg down it’s going to be painful as these can often drop 15 to 20%.

At the moment I’m watching for signs that gold has formed an intermediate degree bottom. If that bottom can hold above the June low it will confirm that June marked a final bear market bottom, and I believe the start of the bubble phase of the secular gold bull market.

In a somewhat related vein I want to finish this article by talking about inflation. The general consensus at the moment is that there is none. That of course is nonsense. We have massive inflation right now. Inflation is an increase in the money supply.

What most people don’t understand, including members of the Federal Reserve, is that inflation doesn’t typically flow evenly into all assets. During the beginning stages of an inflation liquidity usually flows into financial assets, as that is where the Fed targets its efforts.

Notice in the chart below that from 2002 to 2007 inflation expressed itself as rising stock prices and a bubble in the real estate market. During this time the general consensus was that we had little to no inflation. The reality was that we had massive inflation, it’s just that everyone was looking for it in the wrong place. Once the housing bubble and stock bubble began to deflate the inflation that had been stored in these markets began to leak into the commodity markets and the second stage of the inflation began. This culminated with a spike in the CRB and oil reaching $147 a barrel. 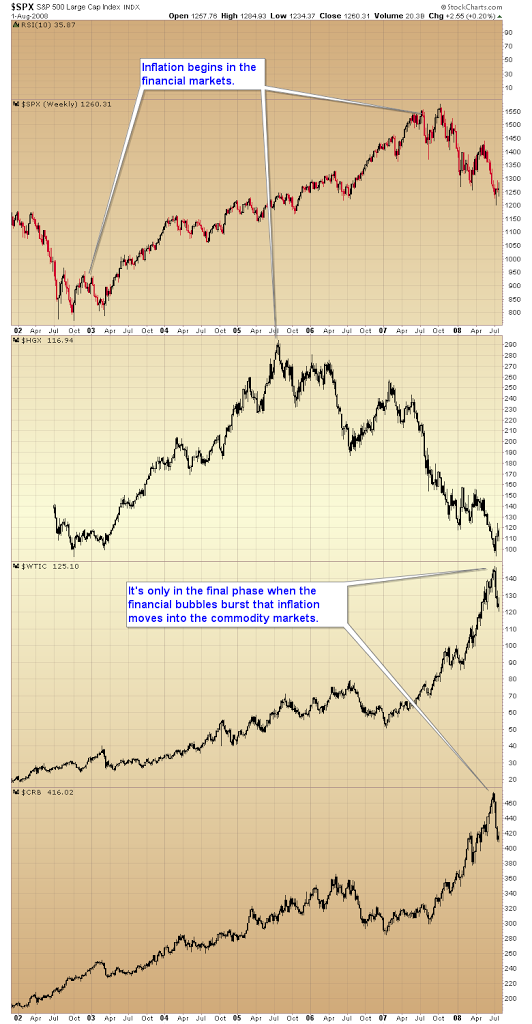 I would argue that we are now about to begin a second stage inflation again. It appears that rising interest rates have already pricked the echo bubble in the real estate market, and at five years the bubble in the stock market is almost certainly in the final euphoria stage. Once stocks begin to stagnate and rollover we are going to see that same process that we saw in 2007/08 as inflation leaks out of stocks, bonds, and real estate and moves back into the commodity markets
. 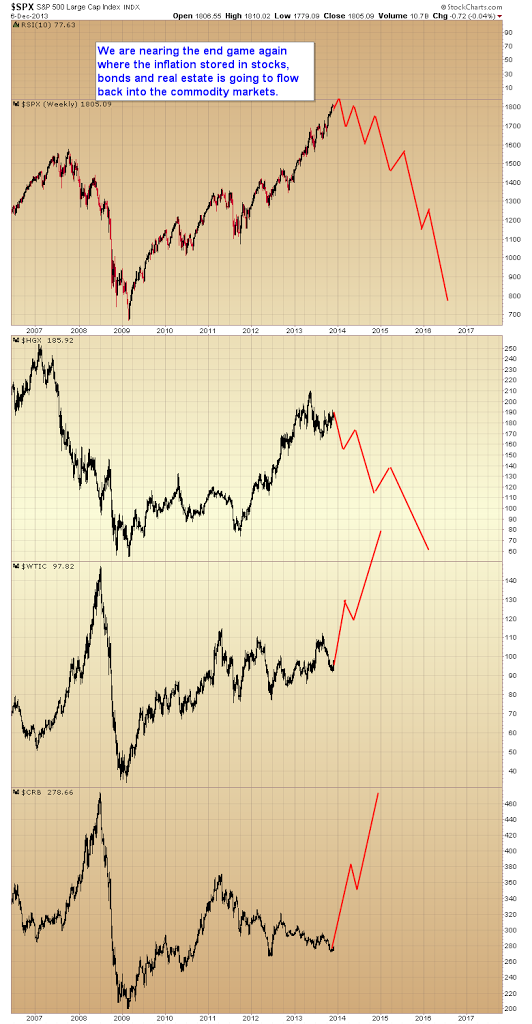 If I’m correct about gold forming a final bear market bottom then this second stage inflation is going to be an incredible driver for the next leg of gold’s bull market, which I believe will probably turn into the bubble phase and top some time in 2017/18.