I think the Fed is in a real pickle next week. If they can’t get the stock market turned back up on Monday or Tuesday they will have to decide whether or not to taper into a falling market.

On one hand withdrawing liquidity during a semi crisis may just make the situation worse. On the other hand aborting the taper would just confirm that something serious is happening and probably spook the market even more. This may be a no win situation for the Fed.

At this point I think the most likely bottom for the dollar will come on the GDP report March 27. That would be just long enough to balance the previous short cycle, but not so long as to run far beyond the normal timing band, which would be the case if we were to get a bottom on the April employment report.

The fact that stocks couldn’t rally out of the Bollinger band crash signal today is not a very encouraging sign. If we continue down Monday and Tuesday then this is going to start to look like something more serious than a half cycle decline. We already have a warning shot as the German DAX has signaled a failed intermediate cycle. A major stock market signalling a failed IC is a serious red flag. 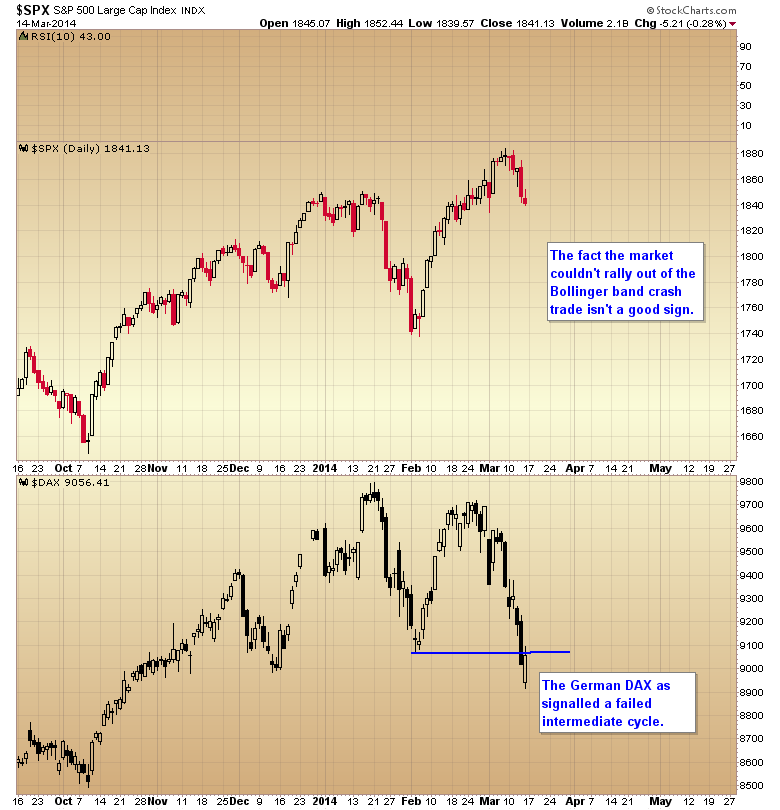 Needless to say we won’t be trying to pick a half cycle bottom this time. I’m going to need to see a full recovery to new highs and a right translated daily cycle before I even remotely consider buying stocks again. As of Friday the market has topped on day 21. That has the potential to turn into a left translated cycle. Extreme caution is warranted at this time.

It also means this third daily cycle must unfold as another right translated cycle. Since today was only day 9 (or maybe day 5 depending on how one wants to try to count the fuzzy DCL) that means no top for at least another 4 to 8 days. If I’m right about the dollar bottoming on March 27 then gold should have at least another 9 days before this cycle tops. 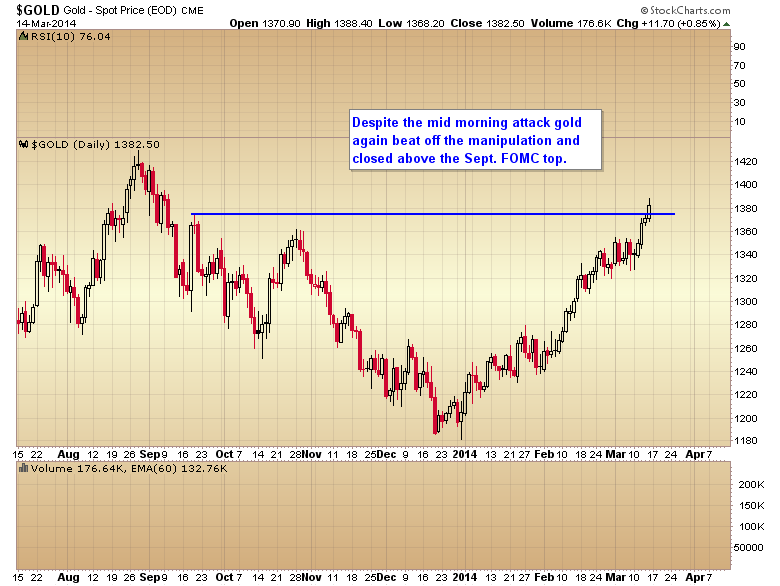 If we use silver, platinum or palladium the current cycle count is clearer and it appears day 3 or 4 would be the correct count. That would suggest gold probably has at least 2 and maybe 3 more weeks before this intermediate cycle tops.

Moving on to the weekly charts, nothing about this week looks like an intermediate top to me. Gold delivered a strong 3% gain and looks like it’s ready to accelerate towards a final intermediate top. Miners a 6% pop out of the three week consolidation. 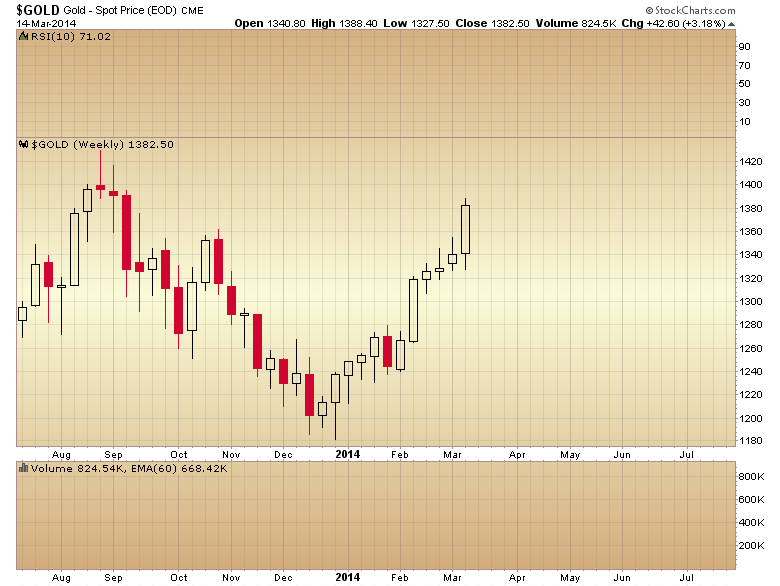 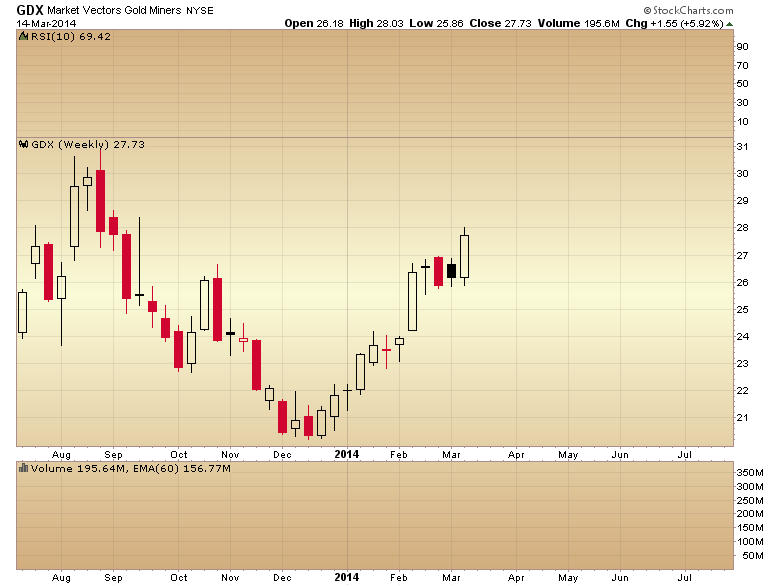 As the dollar should be ready to accelerate into it’s intermediate bottom, the metals should give us at least two more weeks of gains and push the intermediate cycle into a right translated configuration. Both events should be extreme enough to drive major moves in sentiment. For the dollar I want to hear talk about a complete collapse and losing reserve currency status. We haven’t heard much of that kind of talk for the last two years. Now that we are starting down into the three year cycle low it’s time it starts again. That will happen once the dollar index breaks the Oct. low.

For gold I want to see euphoria take hold of the gold bug world. I want to see sentiment do something it hasn’t done since 2011 and that is generate a true bullish extreme. As you can see we still have plenty of room to rally before we have to worry about running out of buyers.

That should happen once gold breaks above $1434. That will also set up a massive head and shoulders bottoming pattern with the potential to drive at least a retest of the all time highs later this year. 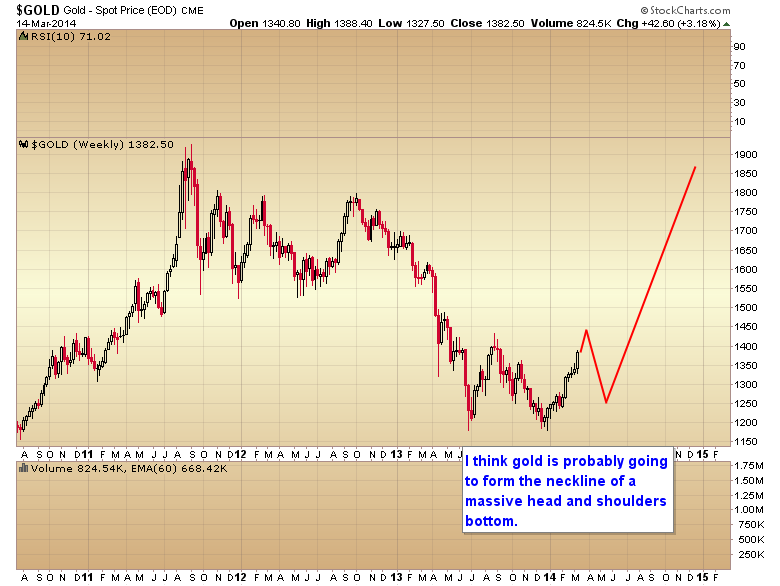 And if all that isn’t enough gold is going to complete a golden cross (50 DMA crosses above the 200 DMA) either next week or the week after. Another sign the bear market is over. 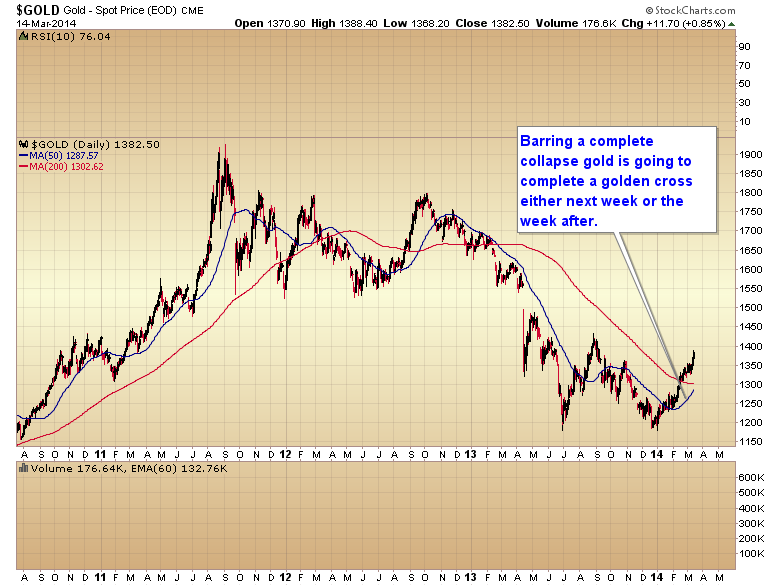