First off an update on the website. It looks like we are getting close. Unfortunately the subscription plugin is no longer an active company and we can’t obtain a re-install so we are in the process of transferring all the active files into a new subscription plugin. This is just going to take a little time, and from what I understand the new system once we go active will create new passwords for everyone. So be sure to check your email once the premium site comes back online for your temporary password. If you don’t see it check your spam folders.

As soon as the website is active I will post a notice here on the blog and the nightly reports will return to the premium site.

I’m going to start off today by saying that nothing happened in the Ukraine this weekend that the market didn’t already know was coming. The market has known all along there was never going to be a war. It’s known all along what the vote would be this weekend and that Crimea would elect to secede to Russia. All of that was priced in by the close Friday.

I would argue that the only thing that has changed is that the Fed needs the market rising when they deliver the next FOMC statement Wednesday afternoon, and I think they will do everything in their power to make sure that happens. The question is will they succeed? Based on the close today I would have to slide the odds in the Fed’s favor. 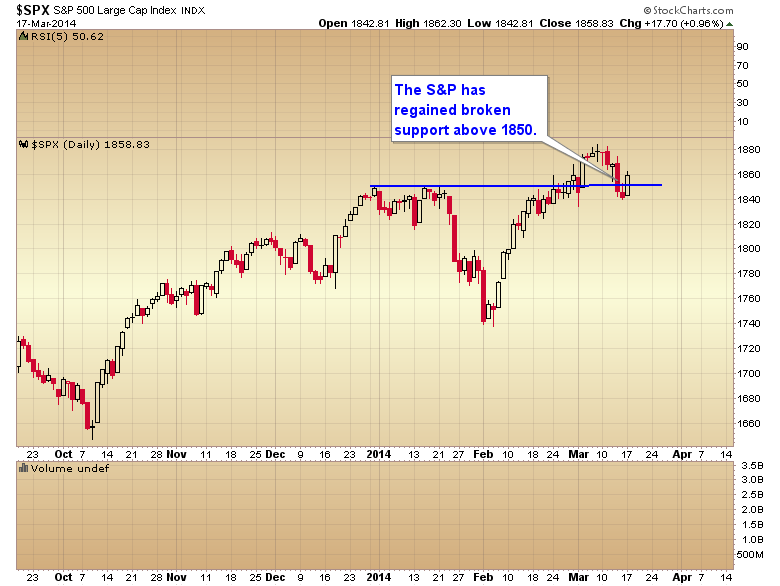 The Nasdaq however has not regained that 4290 support zone. Until it does I’m not going to increase position size in the stock portfolio. 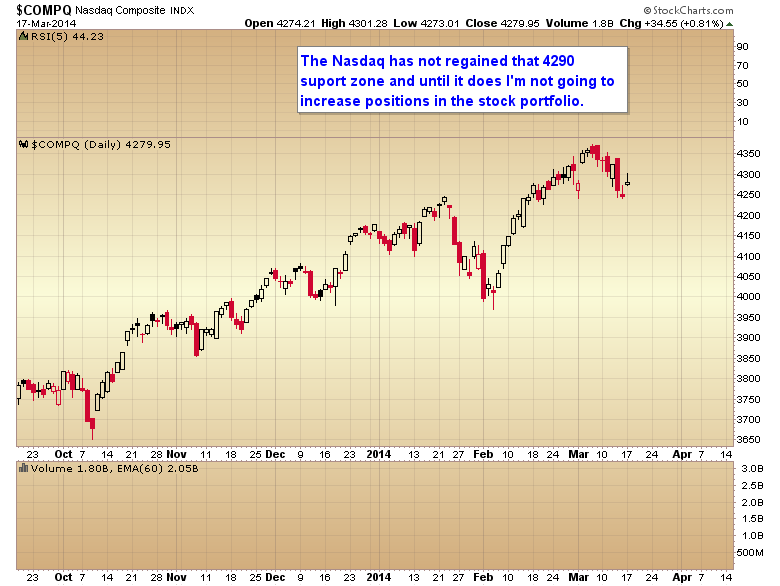 On a purely technical basis gold has formed a bearish engulfing candle today. It also closed below the Sept. FOMC top. Ignoring everything else the charts are saying that manipulation zone has been successfully defended … at least for today. 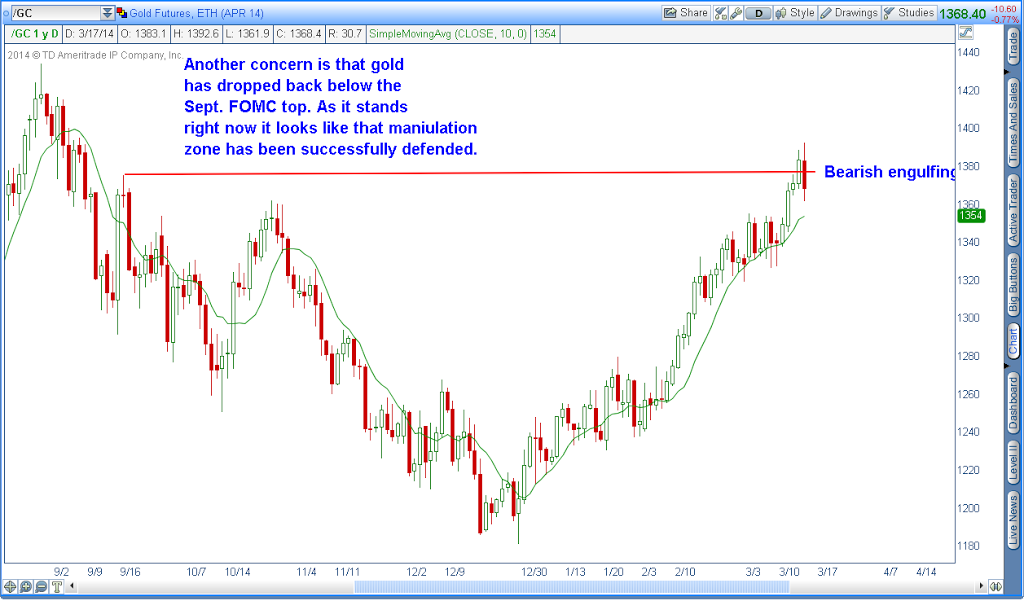 If we were dealing with freely traded markets then I would say gold is just preparing to dip down into a half cycle low. No big deal. But as we all know there are no freely traded markets anymore, and this has to some extent become a business of trying to second guess when and where the next manipulation is going to occur. We anticipated the stock market manipulation correctly, now we have to look into our crystal ball and try to decide where the metals are going to be driven next. Will it be towards the moon, or over a cliff?

I think this all started as just a knee jerk reaction to the Fed’s manufactured rally in the stock market. Gold was holding up rather well for most of the morning and had even climbed back above $1380 at one point. However it wasn’t long before the now familiar dump triggered a sell off and before it was over gold had dropped over $30 from top to bottom.

I don’t expect there is going to be a lot of buying pressure between now and the FOMC statement on Wednesday afternoon so the potential is there for another middle of the night or premarket attack. If it happens in this pre FOMC environment there is risk that a well timed manipulation event could drive gold back down into the consolidation zone below $1350. It took a lot of time and effort for buyers to break out above that resistance zone, a move back below that level could be demoralizing for the bulls and we could see the buying pressure dry up completely.

The miners have already dropped back down into the consolidation zone and on heavy volume. I was really expecting buyers to show up at $27, when they didn’t it triggered even more concern. 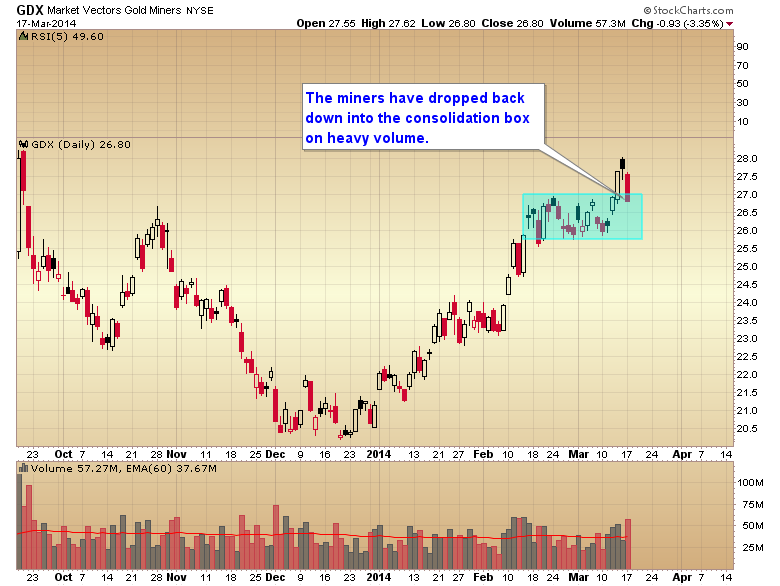 This is a dangerous time right here. Gold could be just one manipulation away from breaking the daily and intermediate cycle. Until I have some idea how this is going to play out I’m happy to lock up most of our profits and be satisfied for now.

Actually I’m seriously considering taking the rest of our profits and just sitting on the sidelines until the next ICL in May or June. It’s not critical we catch every last penny of this intermediate cycle, we’ve already made good money.

The big money is going to come during the next intermediate cycle anyway, so I’m very tempted to just lock up our metals portfolio and go on vacation for the next two months (at least in the metals portfolio).

I’ll probably make a decision tomorrow based on if gold follows through to the downside.

Another concern is that oil continues to drop into it’s intermediate bottom (ICL). As it does it’s dragging most of the commodity sector down with it, and this may include gold if today is any indication. A normal ICL for oil is 50-70 days. Today was day 45 with potentially 5-25 days yet before a bottom. 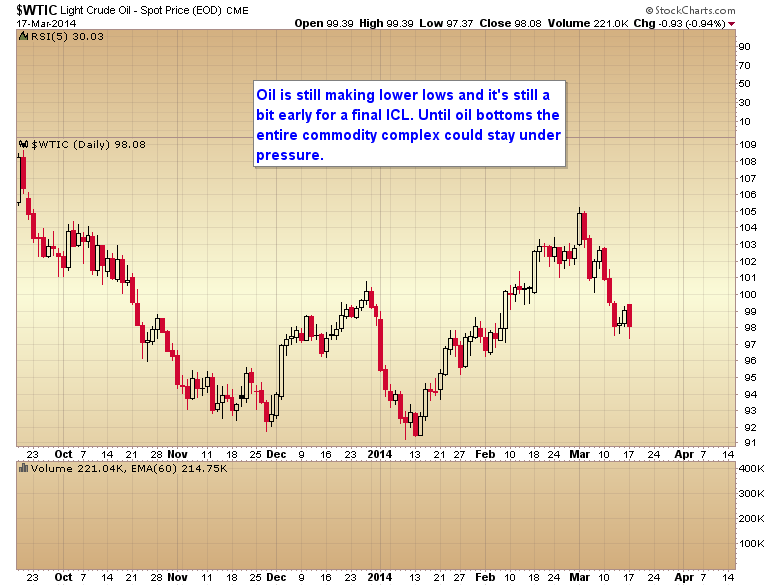 We’ve had a pretty good start to the year so far. It may be time to take a much deserved break and wait for a better setup with less downside risk and more upside reward. I’m confident we will get that for sure at the next ICL, so I’m not extremely motivated to try to catch every last penny now that gold isn’t behaving perfectly.

Basically once gold gets past 10 weeks into an intermediate rally, and intermediate term overbought, I need it to behave perfectly to keep me on board. Today gold misbehaved, and lost some of the romance. Anymore of that and I’m going to want a divorce…at least for a month or two. 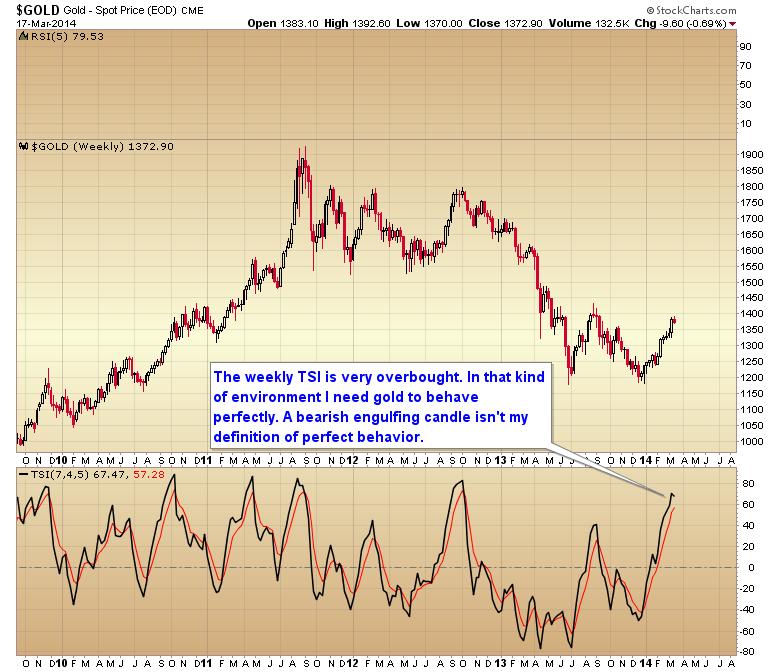