Following up on my last article it does look like stocks have begun to move down into the yearly cycle low that I was expecting.

The failed breakout was a big warning sign. After a month and a half consolidation there was no reason for the breakout to fail. By the second test of the 1900 level stocks should have built up enough energy to break through and hold at that point. 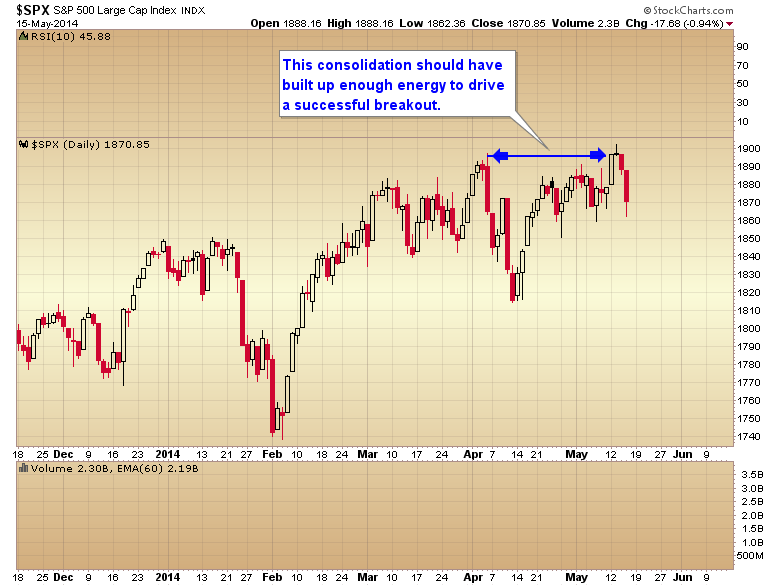 Even more concerning is the ease with which the S&P sliced through that 1880 support yesterday. If the market just needed to build a little more energy then support would have held and another thrust higher would develop from that point. 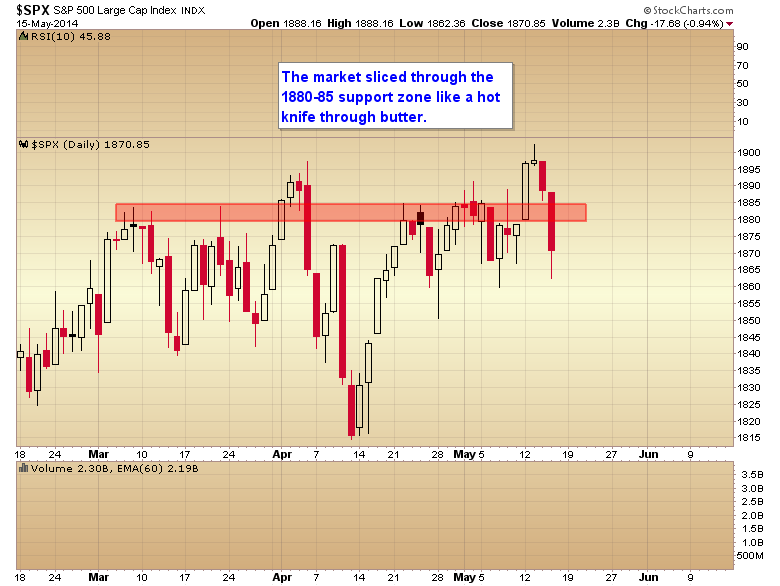 On a cyclical basis the S&P has now broken it’s daily cycle trend line, which is the first confirmation that the daily cycle has topped and begun moving down into it’s daily cycle low. Considering that trough isn’t due until around the June employment report there is a lot of time for the market to drop yet. (About 15-20 trading days.) 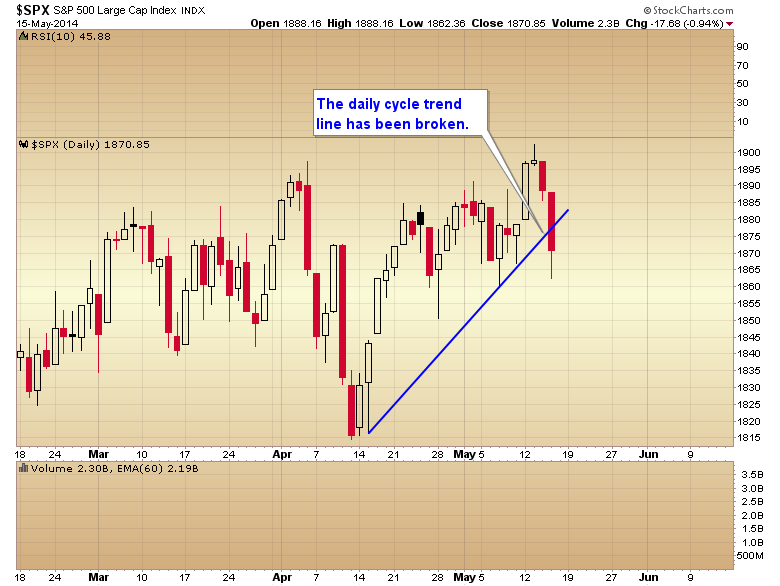 Even more of a concern is that with so much time still left in the daily cycle, the odds are high that the intermediate trend line will also be broken in the near future. When that happens it will confirm that the next larger intermediate degree cycle is also in decline. 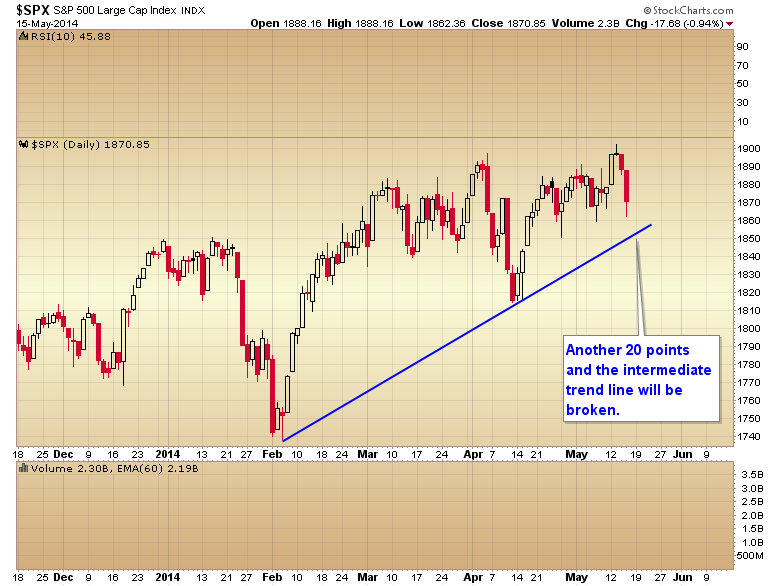 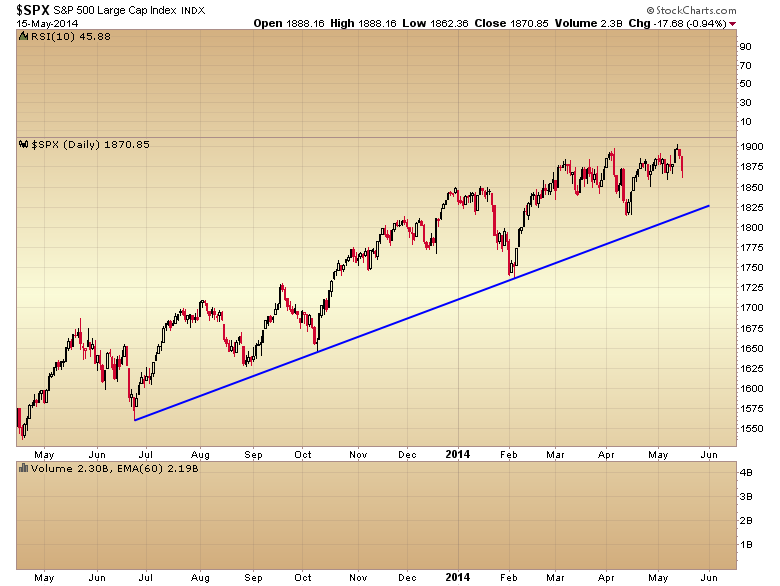 Now here is where things start to get interesting. The Nasdaq and Russell have both printed failed intermediate cycles. When intermediate cycles start making lower lows this late in a bull market it almost always indicates a bear market has begun. 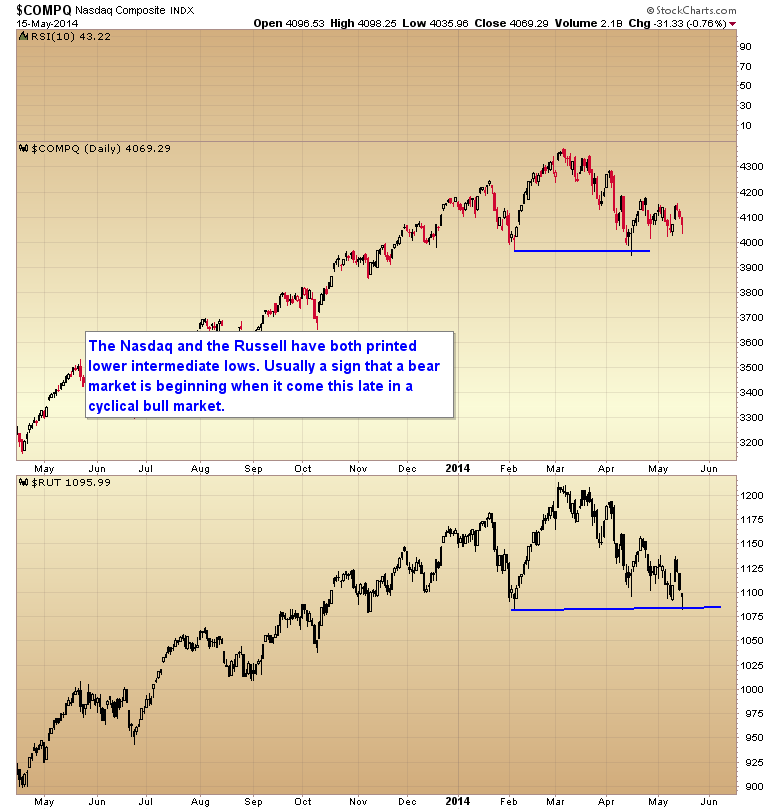 If the S&P follows and moves below the Feb. low over the next 3-4 weeks that would be a big warning sign that this QE driven bull market is finally coming to an end. 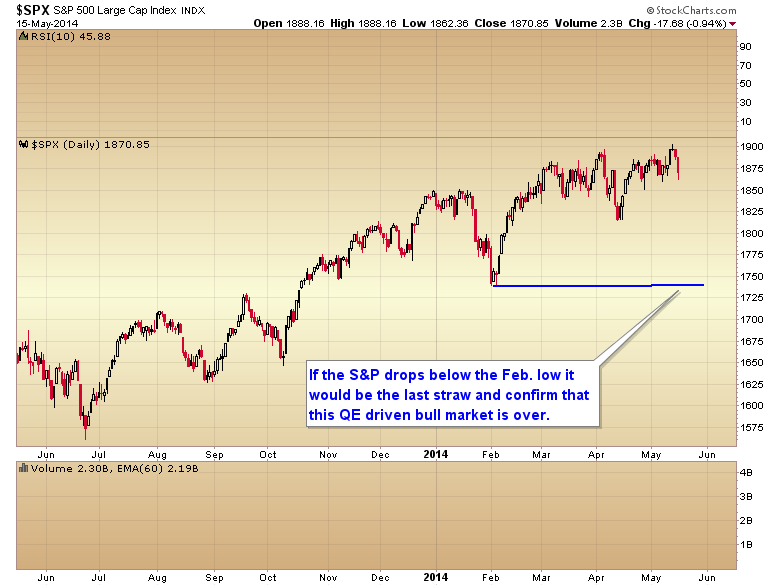 I was originally looking for stocks to generate one last bubble phase before the bear began but when the hostilities broke out in the Ukraine that scenario probably got taken off the table. Since it’s unlikely that situation is going to be resolved anytime soon I expect a final bubble phase is now unlikely, and the bull has probably begun the topping process. I will have a better idea when we see how far down the market drops into this yearly cycle low over the next 3-4 weeks, but based on what is happening in the tech and small cap sector it’s not looking too promising.

The last two times the Fed tried to end their QE programs the market tanked. Did they really think this time would be any different? The process has been slower as they didn’t go cold turkey this time like the last two, but the end result will almost certainly be the same. The unpleasant realization that this bloated market simply can’t stand on it’s own without constant infusions of liquidity.

Turing off the liquidity this late in the cycle will probably kill the bull, and if Yellen panics and tries to restart QE it’s likely to flow into the commodity markets instead of stocks, and that will kill the economy.

21 thoughts on “HAS THE BEAR RETURNED? MAYBE…”