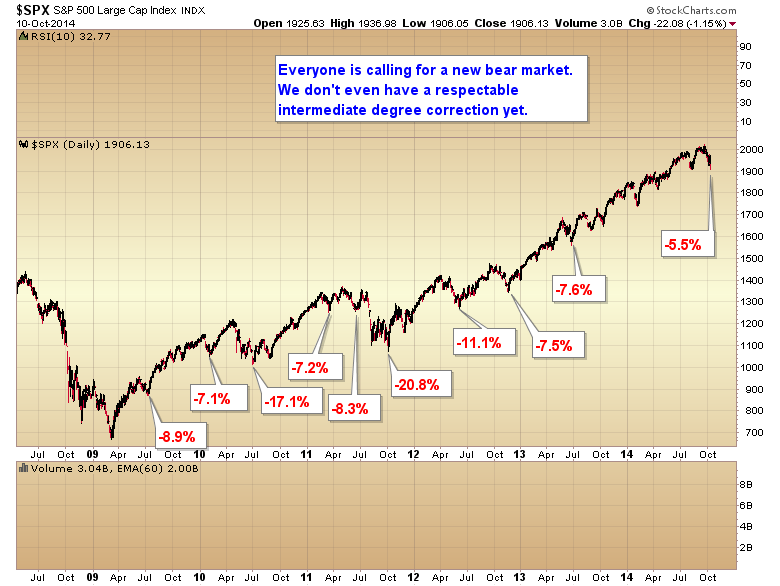 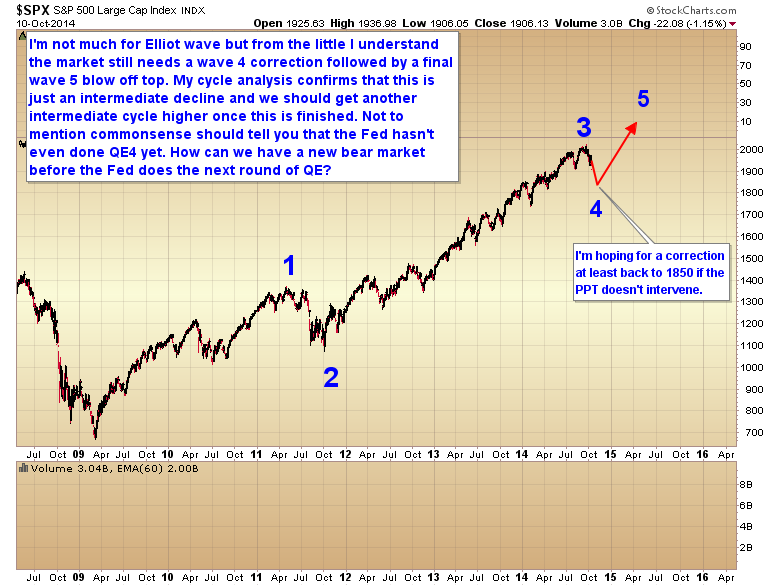 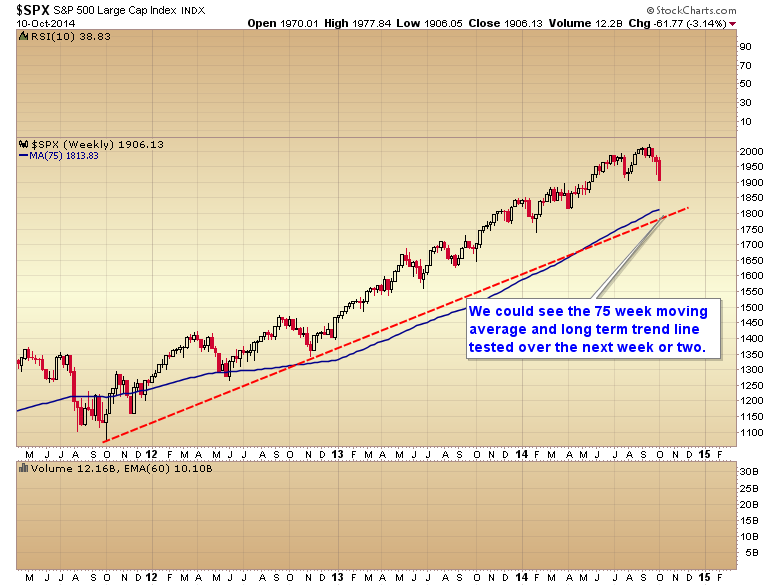 I’m going to do it again and offer everyone a free peek at this weeks weekend report where I explain why I don’t think this is the beginning of a new bear market just yet.

Email a request to [email protected] to receive the log in codes to the weekend report.

The offer has now expired.

Yesterday’s rally was quite convincing so I assumed the normal intermediate cycle parameters weren’t going to apply. The sell off today is signalling that they “will” apply (barring an intervention by the PPT in the next few days). 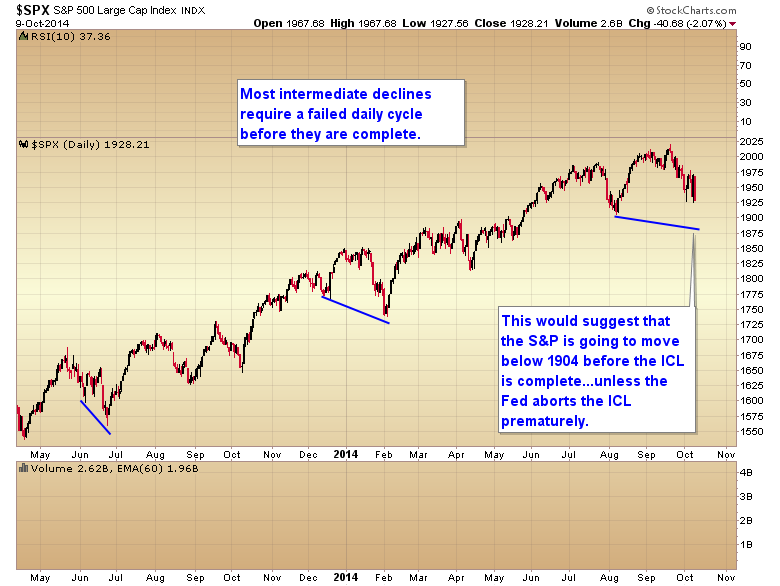 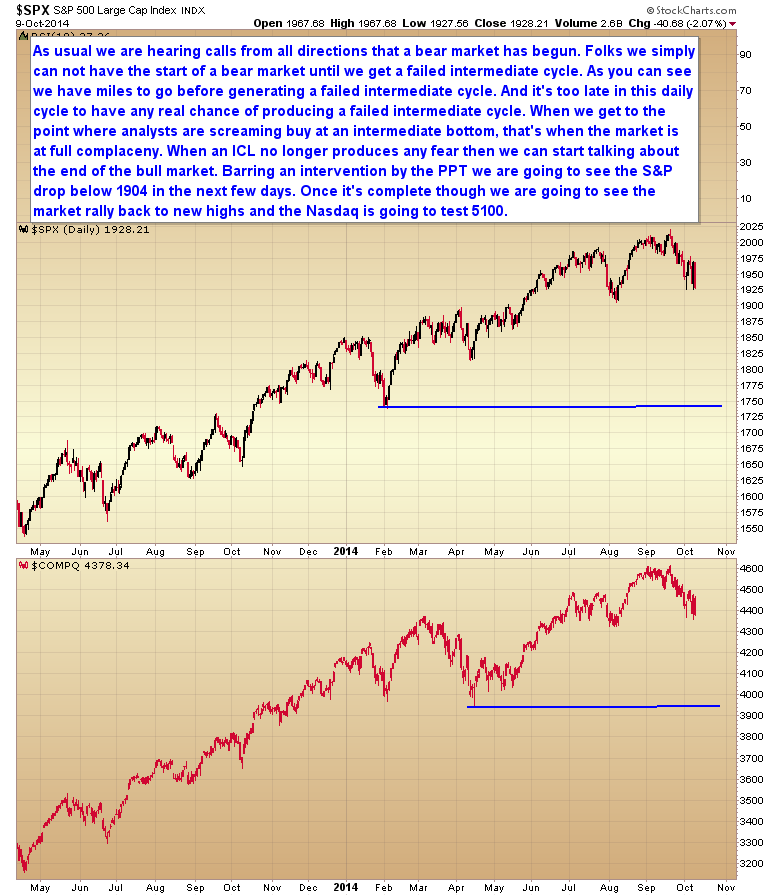 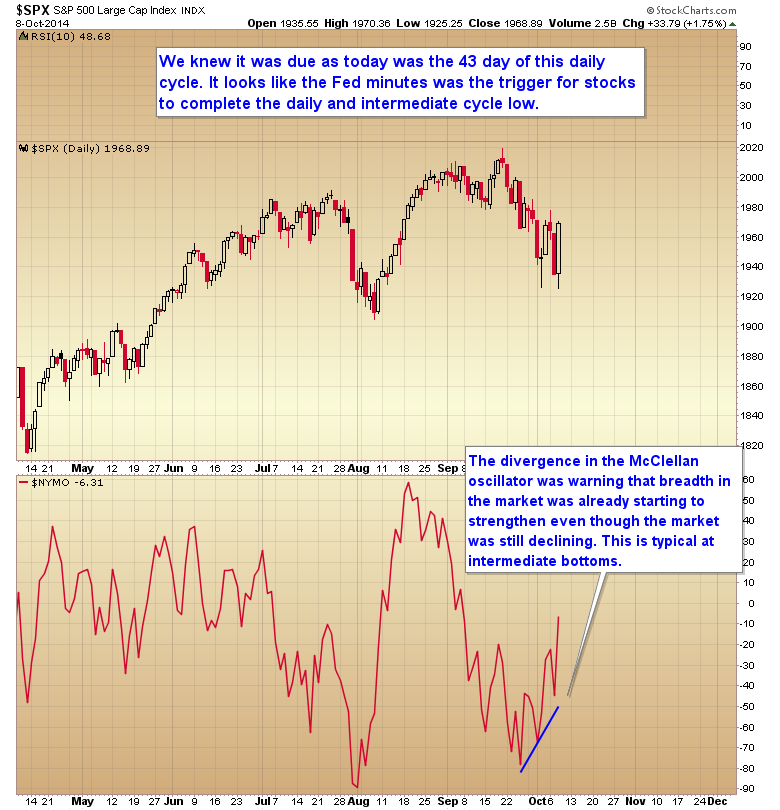 I’m watching tech for the natural cycle count. It’s now on week 25 and due to form an intermediate degree bottom as soon as this daily cycle makes a final low (the daily cycle is on day 42, so a bottom is due any day). 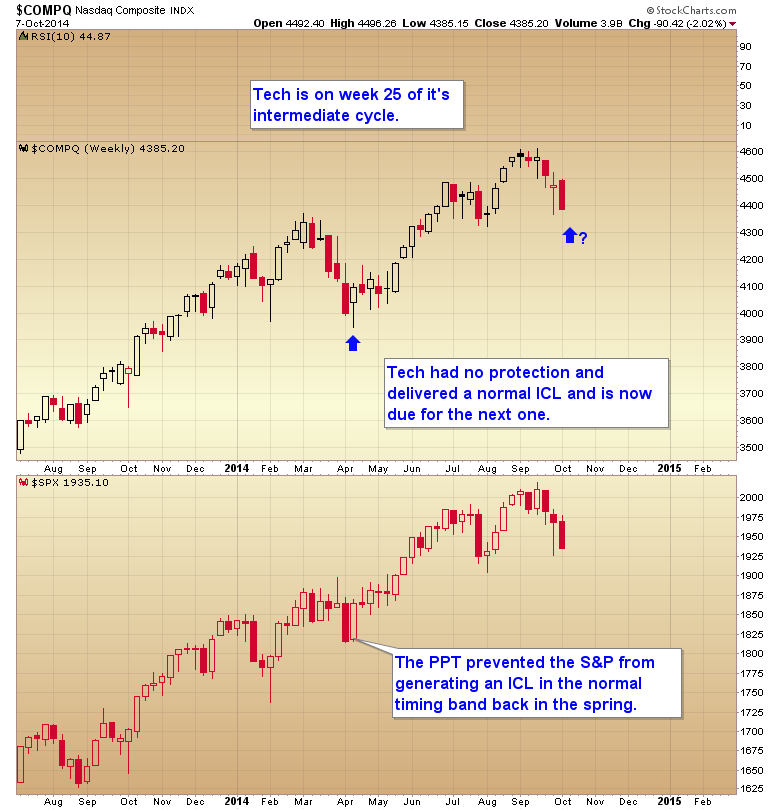 Now that oil has made a lower intermediate low warning bells are ringing that the commodity complex has more than likely begun the move down into its three-year cycle low. That bottom isn’t due until May or June of next year at the earliest. 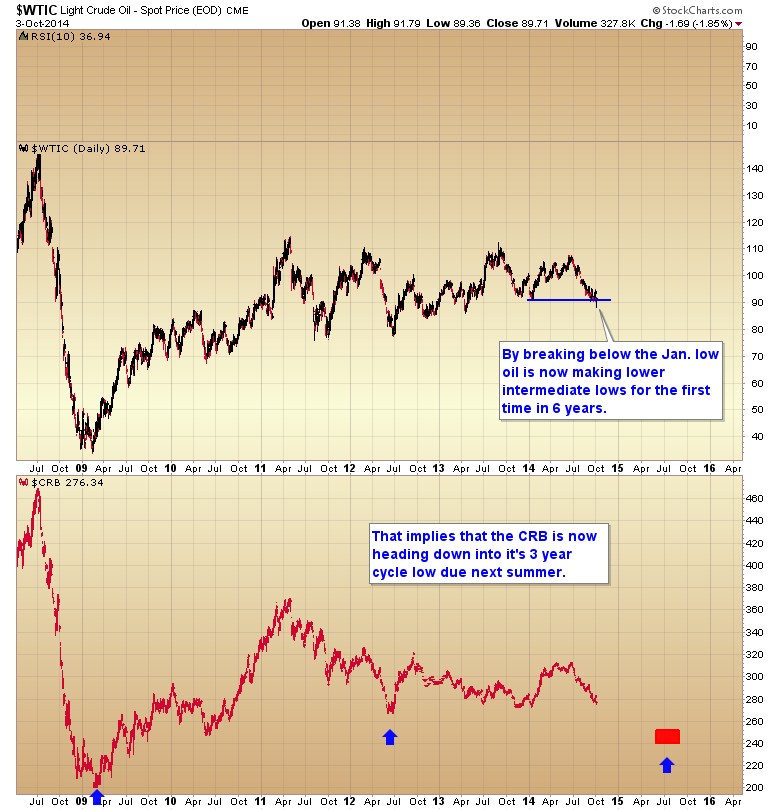 With the larger three-year cycle forces now in control, and the commodity complex in decline, intermediate cycle lows (ICL’s) will tend to be exceptionally vicious affairs. We are already seeing this play out in the gold market as it tests (and will probably break below) the $1180 support zone sometime next week. Silver and platinum have already broken below their summer 2013 lows, and it should only be a matter of time before gold follows. This is going to cause a major panic in the gold bug community, and that is to be expected during ICL’s with the CRB now in the grip of its three-year cycle decline. 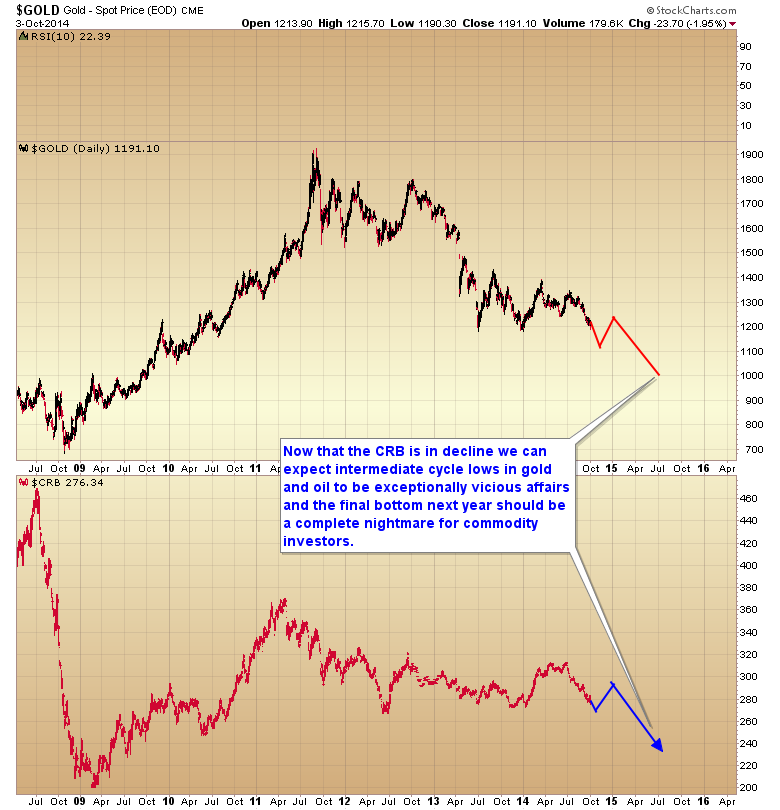 Now before one gets too bearish and starts to short the commodity complex willy-nilly, remember that we are close to an intermediate cycle low here and we’re going to get a convincing countertrend rally soon. Just understand that the rally is almost certainly going to fail to make new highs and will ultimately roll over and move down into the three-year cycle low next summer. And as scary and frustrating as the current intermediate decline is, the upcoming decline next summer is going to be a nightmare of catastrophic proportions for commodity investors. As I have been suggesting for months now I think traders need to focus mainly on the stock market for the next 8-12 months and let the commodity sector finish the move down into its three-year cycle low.

During this period, as commodity prices trend generally lower, a tailwind for the economy will be created as living expenses will decrease giving consumers more money for discretionary spending. Input costs for businesses will decline causing profit margins to expand. All in all, I think this could create the environment for stocks to deliver a final parabolic blow-off top at roughly the same time that the CRB hits it’s three-year cycle low.

Now for the silver lining. At bear market bottoms, which we are going to get in the commodity and gold markets sometime next summer, valuations reach levels that have no basis in reality. They are purely driven by irrational fear. For those that can bide their time, wait patiently, and get to a bear market bottom with their cash intact, this is where real opportunities are created.

I believe at the next major multiyear cycle bottom next summer, we are going to see an opportunity in the commodity complex, especially in precious metal mining stocks, that only comes around once every 40 or 50 years. This is the spot where millionaires and billionaires are created for those with the ability to buy at that bottom. 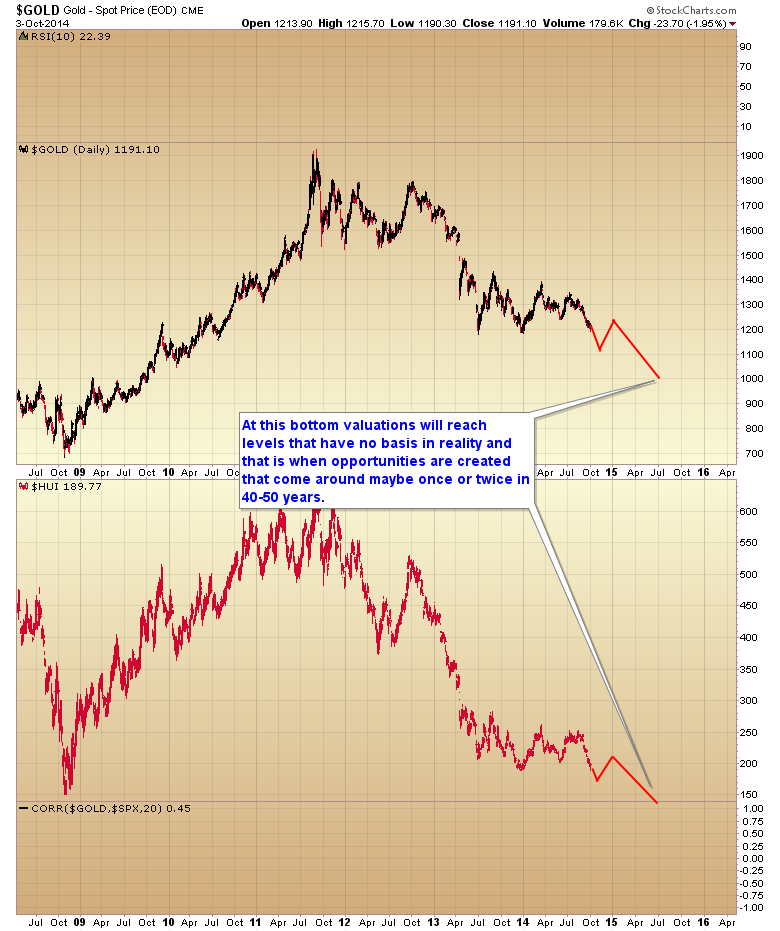 I suggest resource investors curb their animal spirits for now, and focus on the stock market. Our time will come. We just need to make sure we get to the bottom with our capital intact.

For more in-depth analysis of how these larger cycles are likely to unfold, consider a subscription to the nightly SMT newsletter. 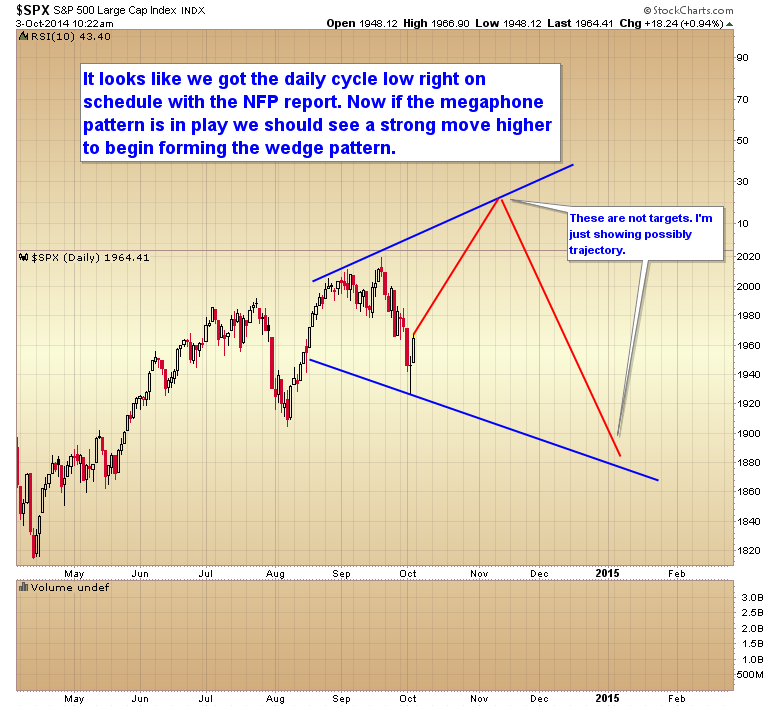