Today I’m going to follow up on my last article “Are commodities at a major turning point”.

If commodities and gold are ready to reverse then the first thing that has to happen is the dollar needs to form a top. I think that may have occurred on November 7th when the last employment report was released. Notice how the dollar formed a key reversal on that day, that was retested Friday and failed, forming a bearish engulfing candlestick. 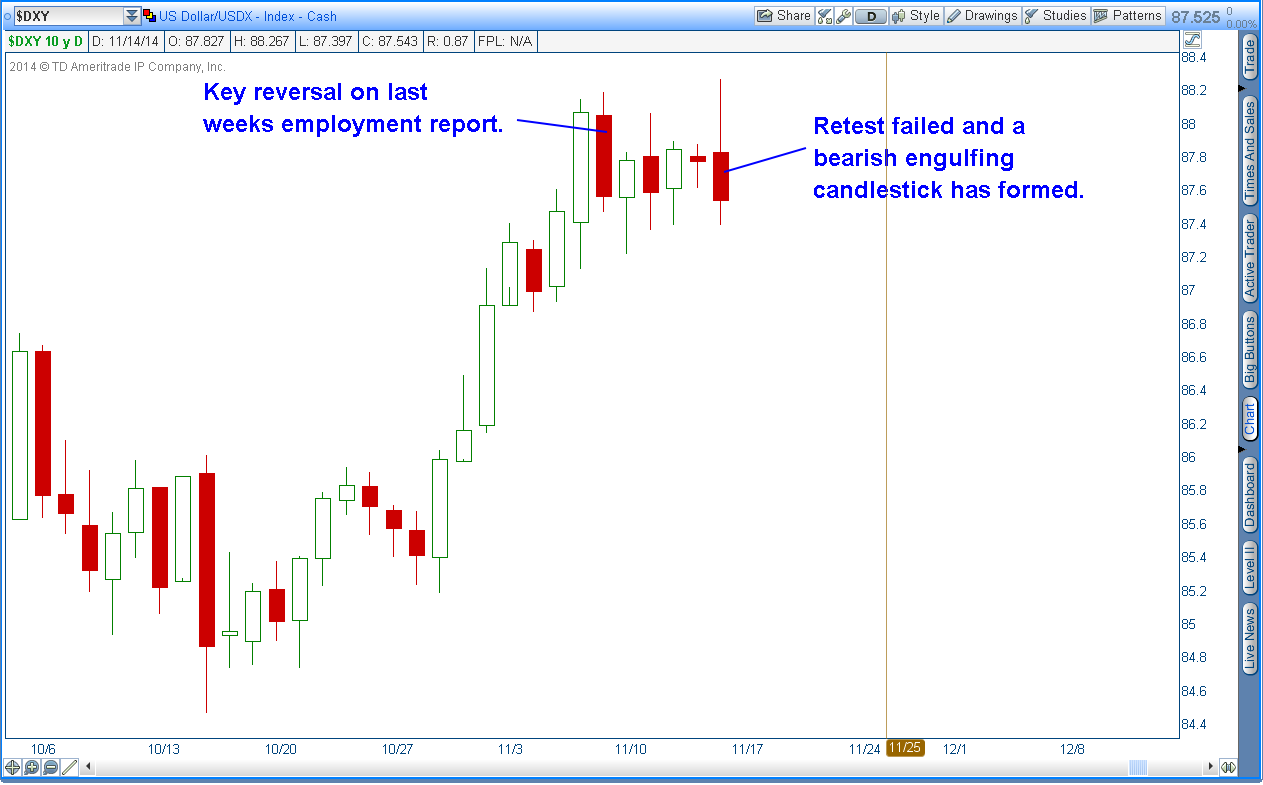 Considering that the daily cycle is now on day 22 and late in the cycle timing band, the odds are good that the reversal Friday marked at least a daily cycle top in the dollar index. If that’s the case then the euro’s daily cycle should have bottomed. Looking at the euro chart it does appear that the euro bottomed on November 7. 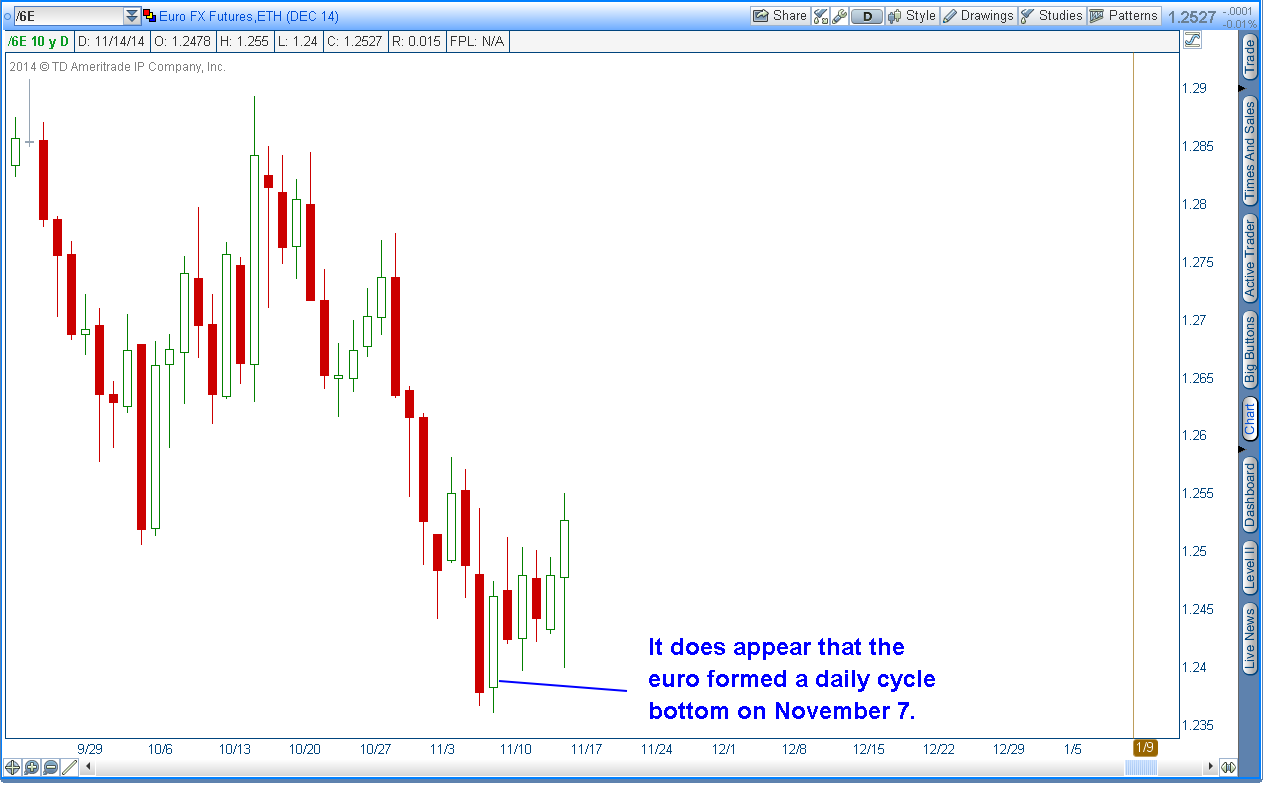 Now the question is are we looking at just a minor daily cycle rally to be followed soon by another lower low, or is the intermediate trend about to reverse? If the intermediate trend is about to reverse, then the euro is going form a right translated daily cycle (rally for more than 12 days) which would force the dollar into a stretched decline that may generate a failed daily cycle even though it is currently right translated (topped after day 12). While the odds are against a right translated cycle producing a lower low it does happen rarely, and I’m starting to think it might be setting up to happen in the dollar index. I think we could see the euro rally until the December employment report, which would correspond with the dollar forming a daily cycle low also on December 5 (stretching the current daily cycle to 36 days). 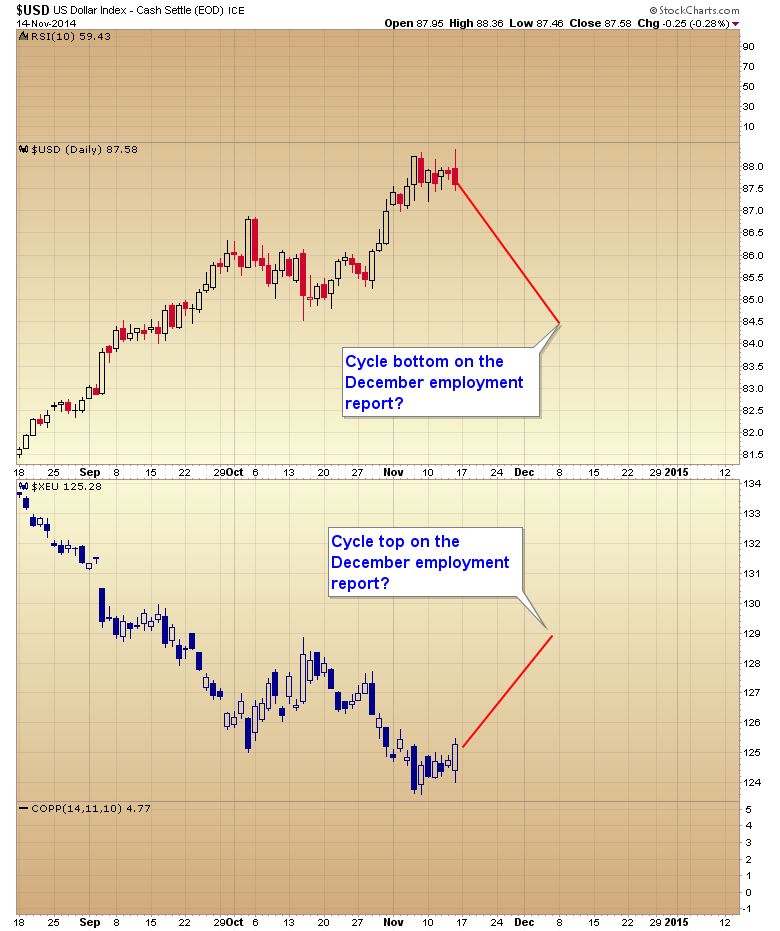 If this unfolds as I have described then both currencies would produce a minor corrective move and then continue the intermediate trend reversal. Notice in the chart below the pattern that would form if this scenario plays out. 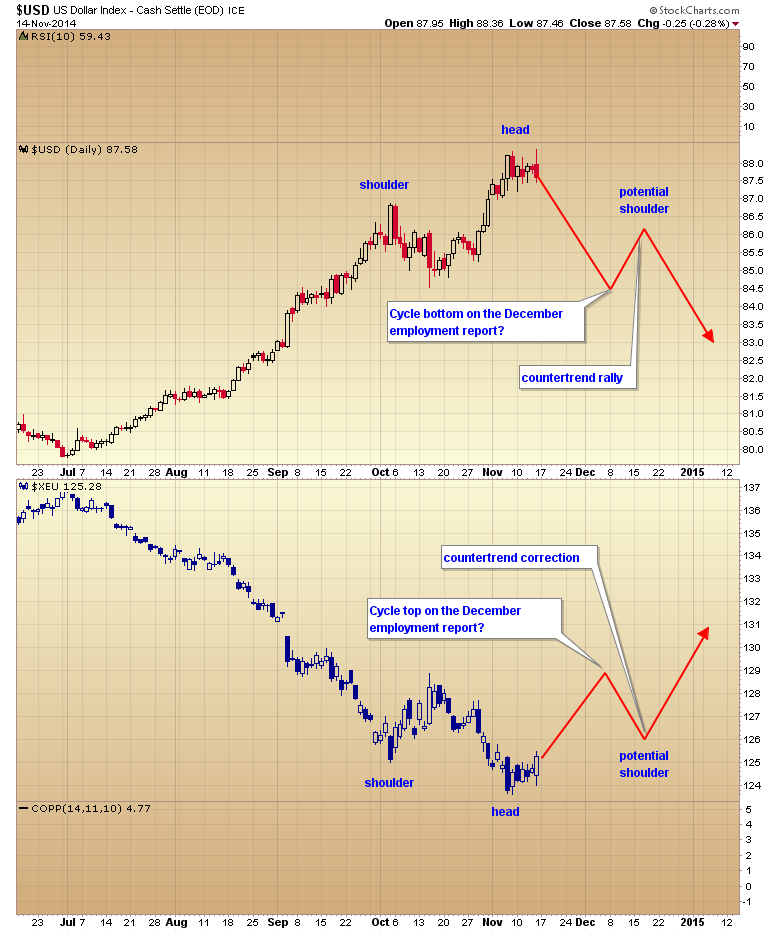 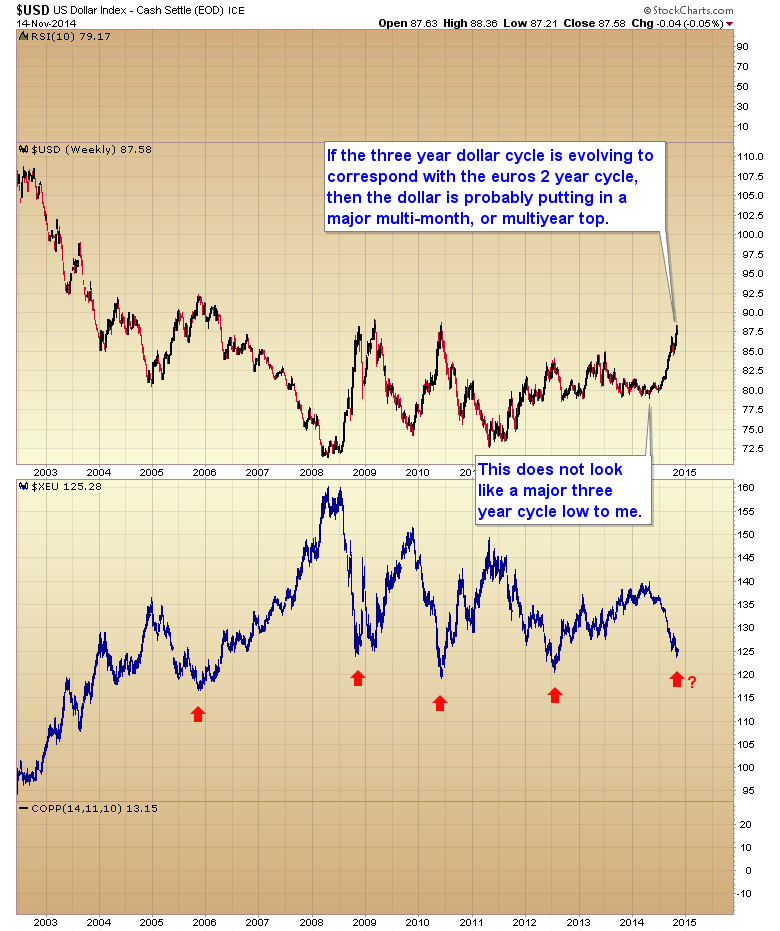 So how does this relate to commodities you ask? Well as long as the dollar continues to rally commodities are probably going to continue to struggle. But if the euro is putting in a major multi-month, or multi-year bottom, and the dollar a major top, then it’s likely, as I discussed in my previous article, that the CRB is forming a slightly early 3 year cycle low right here and now. 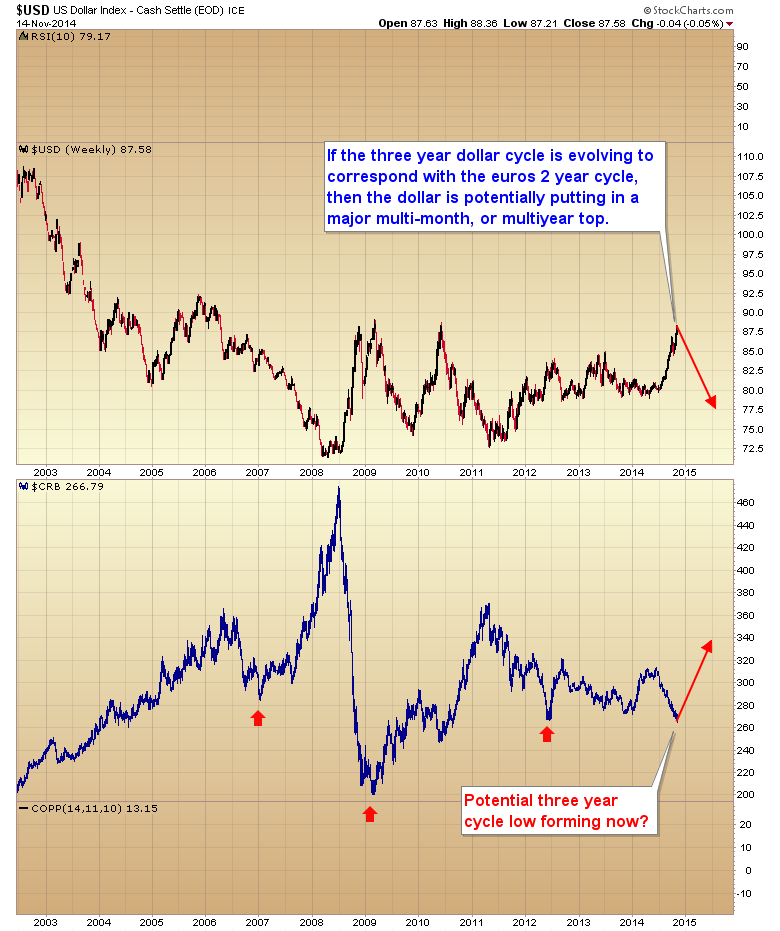 So how does this affect the gold market you ask? Well if the dollar is in the process of putting in a major multi-year top (which I think it’s safe to say no one is expecting at this moment) then it is possible that gold just put in a final bear market bottom. Yes I have been expecting gold to make a final bottom next summer, and that is still a very strong possibility, but based on that two year cycle in the euro, there is a credible possibility that the bottom I was expecting next summer is occurring right now. 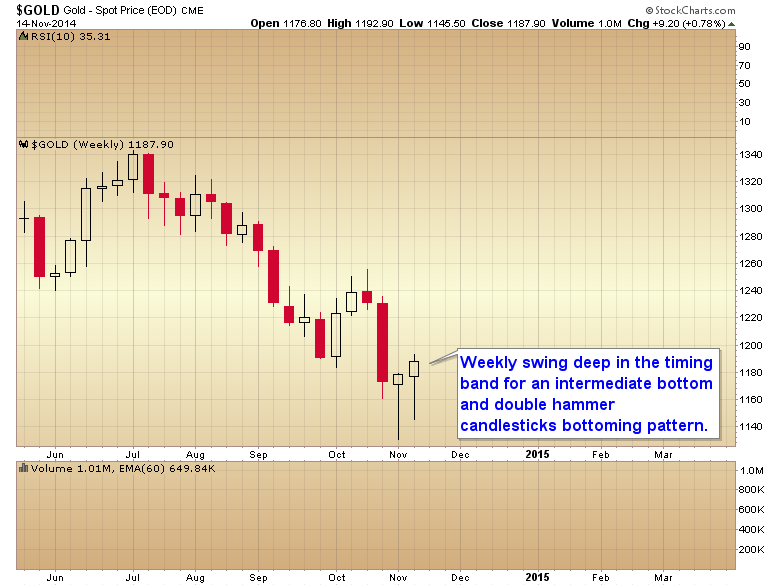 Another sign that something may have changed is the false breakdown below multi-year support. The last time this happened in 2013 gold collapsed in a waterfall decline. This time the break of support has been quickly reversed. As I have noted in the past this is often how major trends reverse as big money will create an artificial technical breakdown (to trigger stops and create a massive liquidity event) to produce the conditions necessary for them to enter very large positions. Unlike me and you these institutions can’t just click a mouse and enter positions. They need a panic selling event to bring enough shares into the market so that they can take multi-million or even billion-dollar positions. 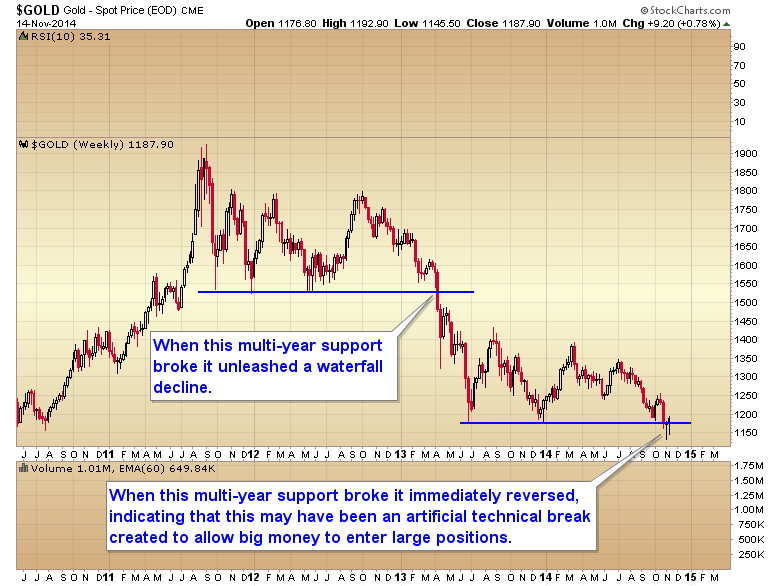 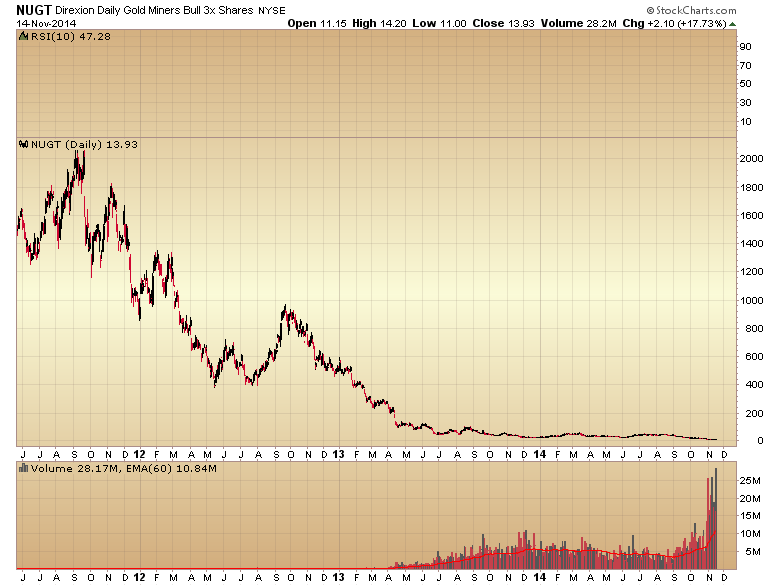 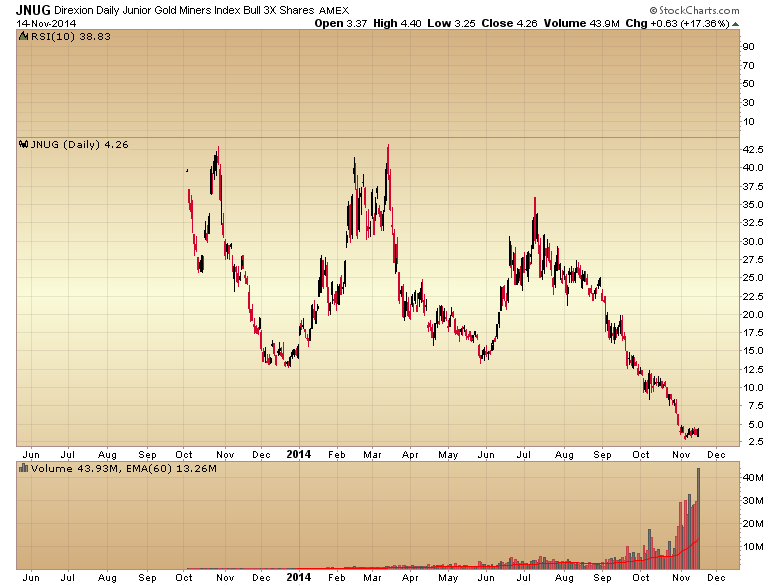 For no other reason than the dollar is due for a move down into its daily cycle low the metals should rally next week. Here’s what I’m going to look for to tell me if the rally is the beginning of a new intermediate cycle and possibly a new cyclical bull market.

First: If gold has put in an intermediate cycle low then the miners are going to produce a very large move this week, somewhere in the neighborhood of 7-10%. A recognition candle stick that signals that the smartest and most nimble players in the market are convinced a bottom has formed and have taken positions. 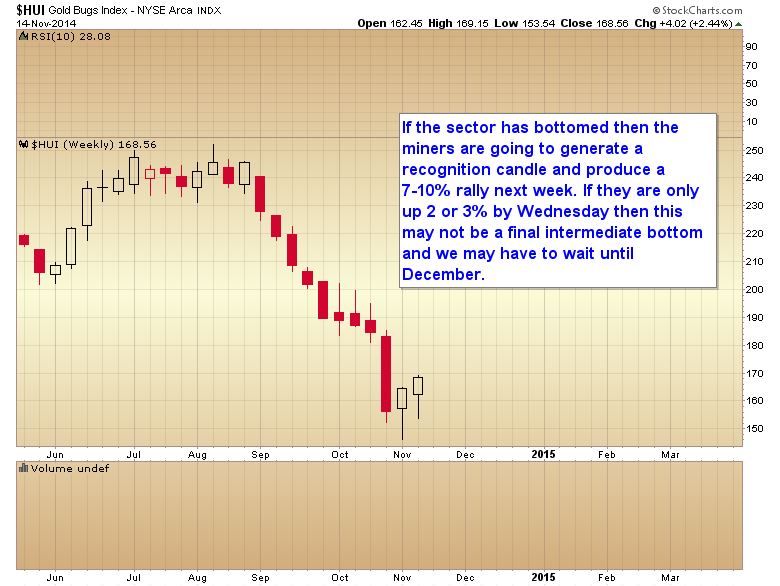 Second: In order for gold to generate a major trend change the currency markets also have to complete a larger degree trend reversal. The rally in the euro will be key. If it rallies enough next week to challenge or break its intermediate trend line that will provide confirmation that the currency markets are reversing. 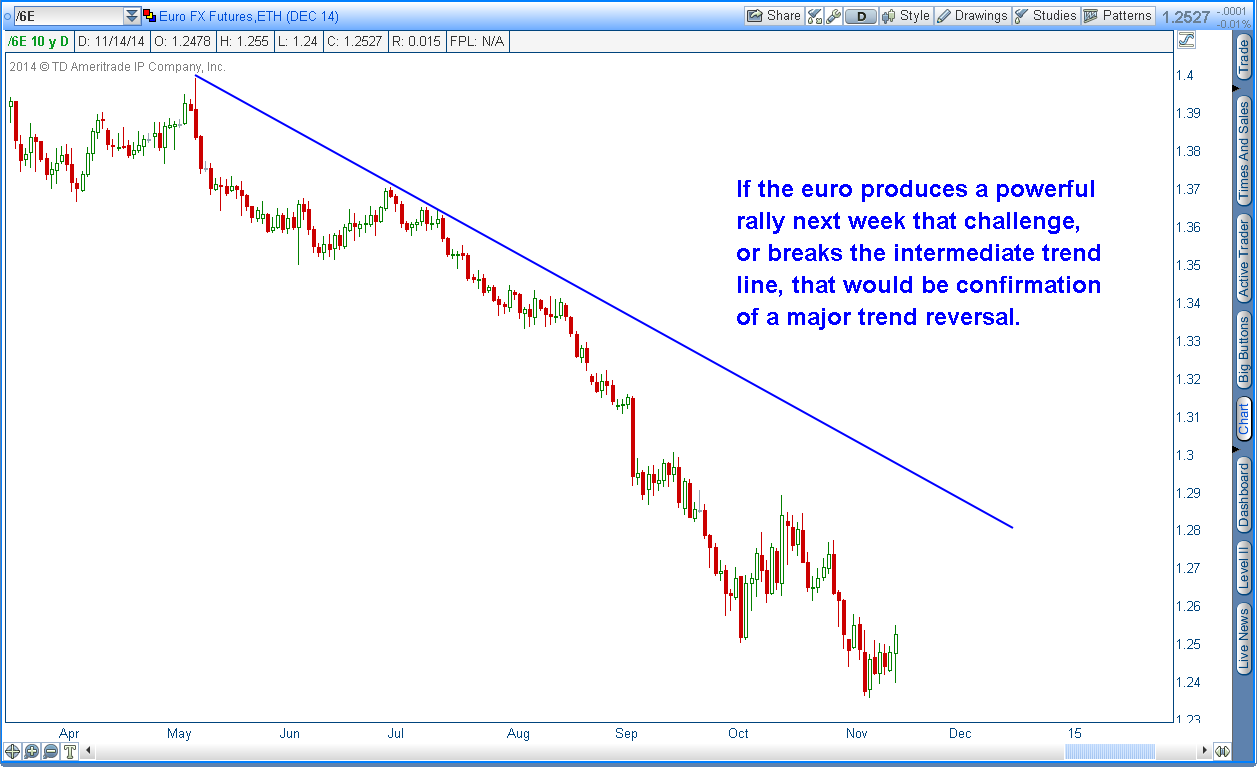 So watch these two charts next week and they will tell us whether or not this is just a short-term bounce in gold with one more lower low to follow later in December, or if the metals have completed a major multi-month bottom, or maybe even a final bear market low.

For daily blow-by-blow coverage as this unfolds next week consider a subscription to the SMT premium newsletter.