So I’m starting to see lots of chatter about traders preparing to back up the truck when gold reaches $1000. First off, if you believe like I do, that this was a mostly manufactured bear market by the bullion banks in order to stretch price as low as possible before the next phase of the bull market begins, then there’s no way it’s going to be that easy.

To begin with, if there’s anything I have learned over the years, it’s that almost no one is able to pull the trigger in real time during a bloodbath phase (the final 5-7 days of an intermediate degree decline). So it’s all fine and dandy to make plans to buy hand over fist when gold reaches $1000, but in real time as the losses are mounting day after day panic can lay waste to the best laid plans, and I have found that very few traders are able to think clearly enough to follow their plan during the last few days of an intermediate decline. The panic phase is just too intense.

While you may have a set price in mind where you think the bottom is going to occur, as that real time panic sets in traders always have doubts. So while it’s easy to envision a bottom at $1000 right now in a fairly serene low volatility market, what happens in real time is that volatility surges, and as price approaches your target your emotions start to conjure up scenarios where gold goes to $900, or $800, or $700. So in real time traders almost always end up like a deer in headlights unable to pull the trigger for fear that the bottom will not occur where they think it will.

Now let’s backtrack to that idea that the bullion banks are trying to artificially stretch the price of gold as low as possible before allowing the secular bull market to resume. If you believe like I do that this was a big contributing factor in this bear market then I think we have to assume that there is very little chance gold is going to bottom at $1000 and make it that easy for everyone to get on board the next leg of the bull market. I’m going to suggest that the odds are very high that this bear market will bottom not with a nice tidy moved to $1000, or even a bit early at $1050 or $1100, but almost certainly as an overshoot to the downside.

If we assume that the bullion banks want to stretch price as low as possible before they release it to the upside, then the strategy most suitable for triggering a massive high-volume washout would be to sucker longs into the market with a fake bottom at $1000 and then to run those stops and force everyone who bought to puke up their shares during a volatile stop run below that level. 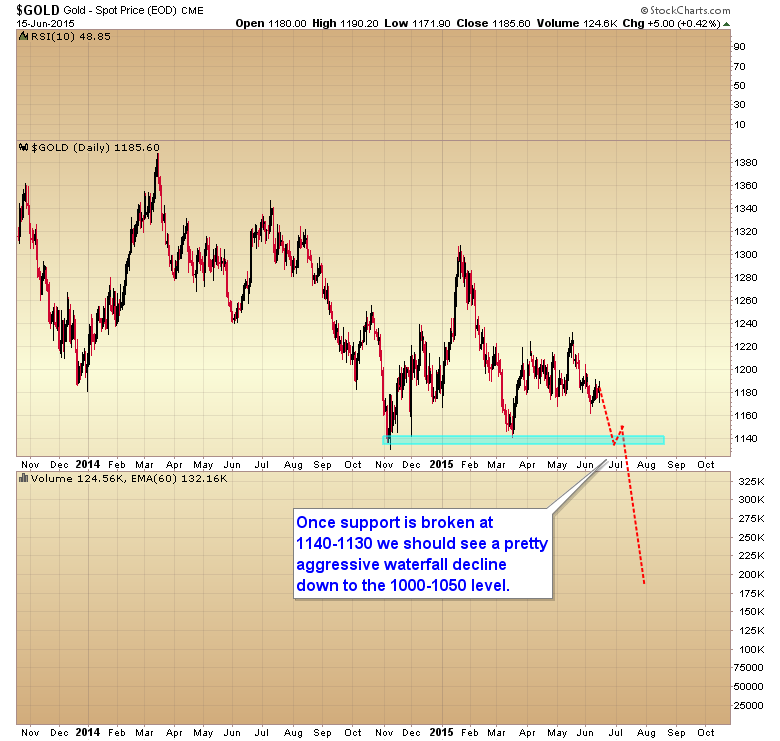 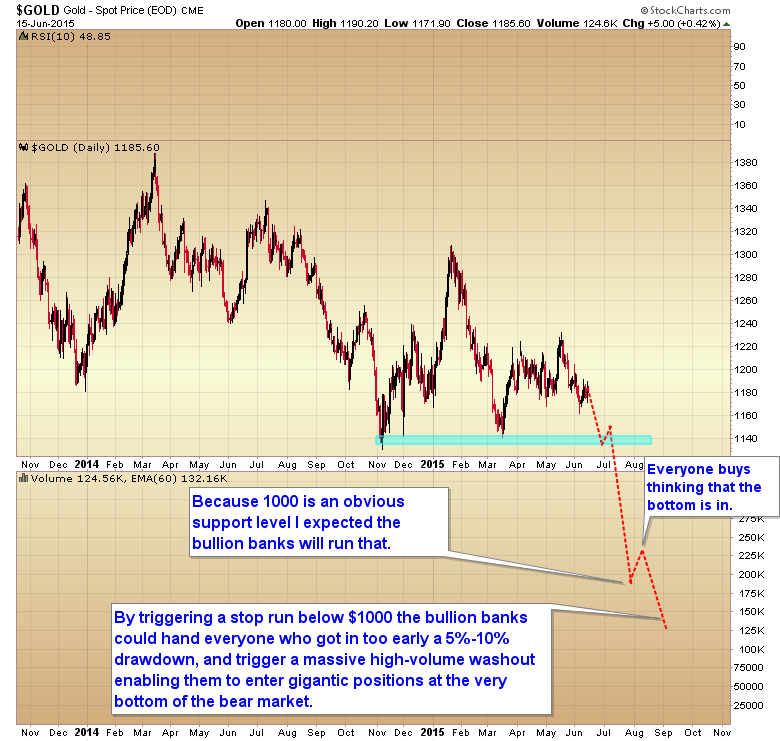 So while one can probably start buying at $1000 you should keep some dry powder available because I seriously doubt this 8 year cycle low is going to make things as tidy and neat and easy as buying at $1000 and then sitting back to get rich.