In my previous article yesterday I tried to stress the importance of getting to the sidelines before gold begins the final decline into its eight-year cycle low. Today I’m going to show you what I think is in store and why.

First off let me dispel any notion that this was a natural bear market in gold. On the contrary, this has been a manufactured bear market brought about by intense paper market manipulation by the bullion banks ever since Germany asked for their gold back. It’s been my theory for almost 2 years now that the bullion banks are trying to force the gold market as far down as possible in order to maximize the potential upside once the secular bull market resumes. It’s also been my feeling that the manipulation would continue until gold at least retraces back to the $1000-$1050 level, and we may, and probably will, get a panic overshoot for a few days below that level.

Let me explain. Let’s assume that on the conservative side the bubble phase of gold reaches at least $5000. Well if the final phase of the bull market starts at $1500 and goes to $5000 that is a 230% gain.  On the other hand if the bullion banks can artificially depress the price of gold to $1000 or even $900 then the potential gain increases to 400% or more. And if you think that’s some juicy profits wait till I get into what I think is going to unfold in the mining sector.

The next thing I need to show you is a long-term chart of the HUI mining index. Notice how the bottom last November got far enough to test the 08 lows. Also notice that the bounce off of that bottom has been extremely weak, signaling that this was unlikely the final bear market low. 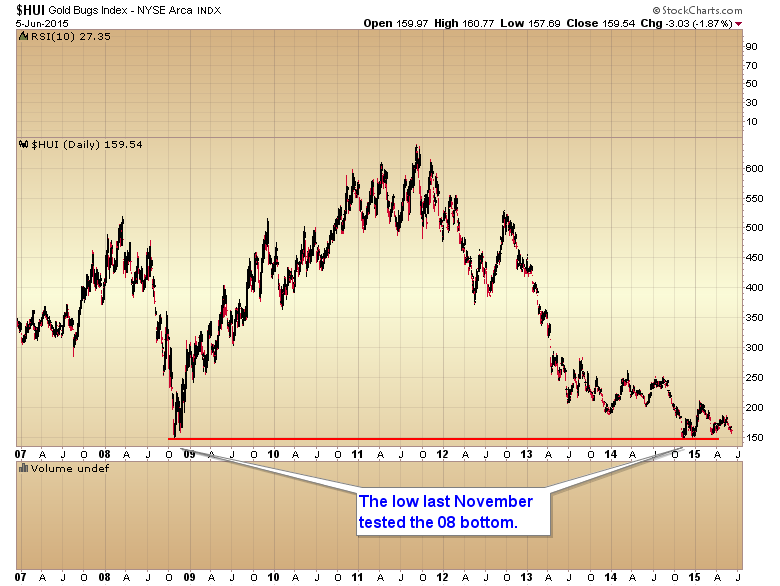 I think I can say with a great deal of confidence the bullion banks have every intention of breaking through that support zone in the next couple of months.

A major eight-year cycle low is usually characterized by complete blind panic. That’s not what we saw back in November, and a pretty good indication that the 8 year cycle low did not form last year like many are hoping. Blind panic is what we had in 2008, and it’s going to be even worse this time because the bear market has lasted much longer and damaged investor sentiment to a much greater degree. The panic at this 8 year cycle low is going to be more intense than it was in 2008. During the final two weeks into the 8 year cycle low traders will be selling at completely irrational valuation levels simply because the emotion of fear is in total control and all logic will have gone out the window. This is the “blood in the streets” phase. I think this phase is coming sometime in the next 8 to 12 weeks. 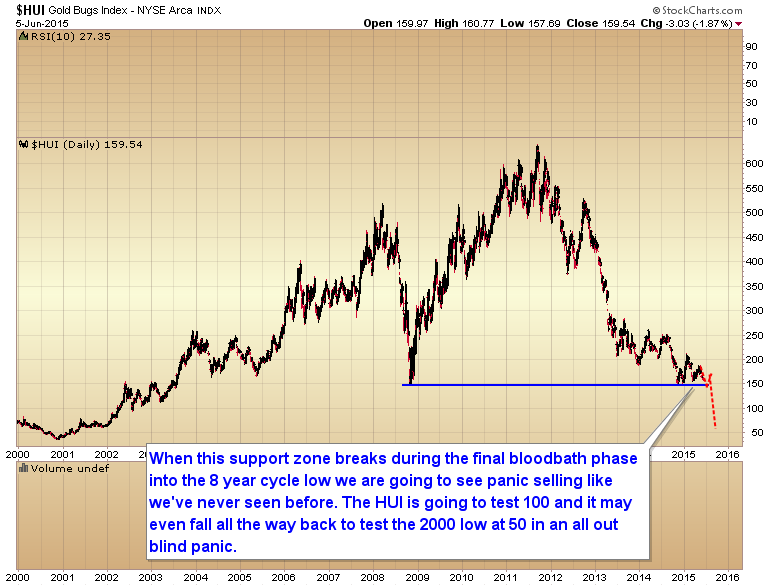 I can tell you that when the support at 150 breaks we are going to see panic selling like we haven’t seen since 2008. The bullion banks are counting on this. Why? Because they want to buy at the lowest price possible.

The bullion banks are trying to manufacture an opportunity like we have never seen before, and they are well on their way to doing it. All they need to do now is break that support level at 150 and trigger the final waterfall decline.

Now you see why I stress the importance of being on the sidelines. Almost no trader in the world will be able to survive when that support level at 150 breaks and the panic begins. The bullion banks are counting on it. They want you to puke up your shares at the lowest price possible. We are talking in the neighborhood of a 30% – 50% decline or greater in a matter of weeks. A drawdown like that is emotionally impossible to weather. You have to be on the sidelines when it occurs. More importantly you have to understand what is happening, why it is happening, and be ready to take advantage of this once-in-a-lifetime opportunity.

I have my subscribers on the sidelines waiting, and I think with the use of cycles analysis and some intuition I should be able to call that bottom when it arrives within a day or two of the exact low. Those traders that are on the sidelines protecting their emotional capital are going to make the trade of a lifetime this summer.

The most important thing right now is to protect your portfolio and your sanity by getting out of the way of this final move down. If you get caught in the final bloodbath phase you are almost certain to lose both.

Gold should bounce a bit this week before continuing lower. I would suggest using that bounce to exit positions and get to the bleachers if you haven’t already. 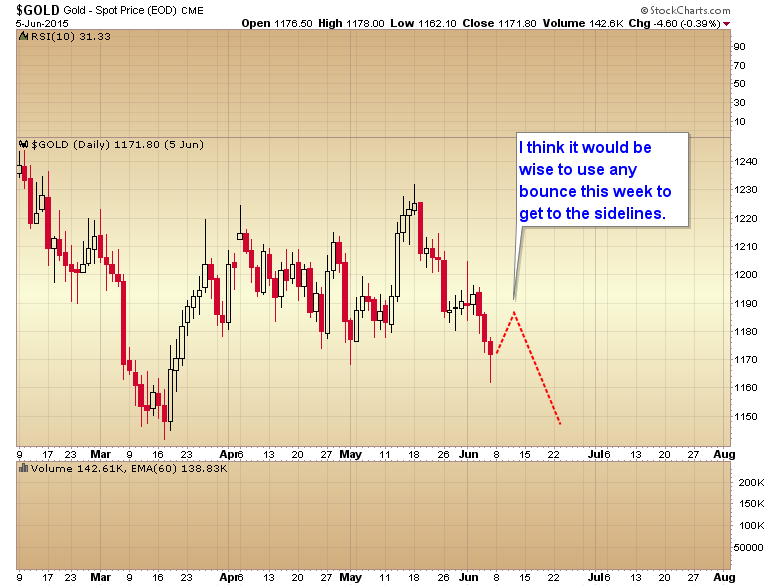 Gold bugs your redemption is almost at hand. I’m getting close to calling the bottom of this 4 year bear market. We just need to complete the final move down into the 8 year cycle low.