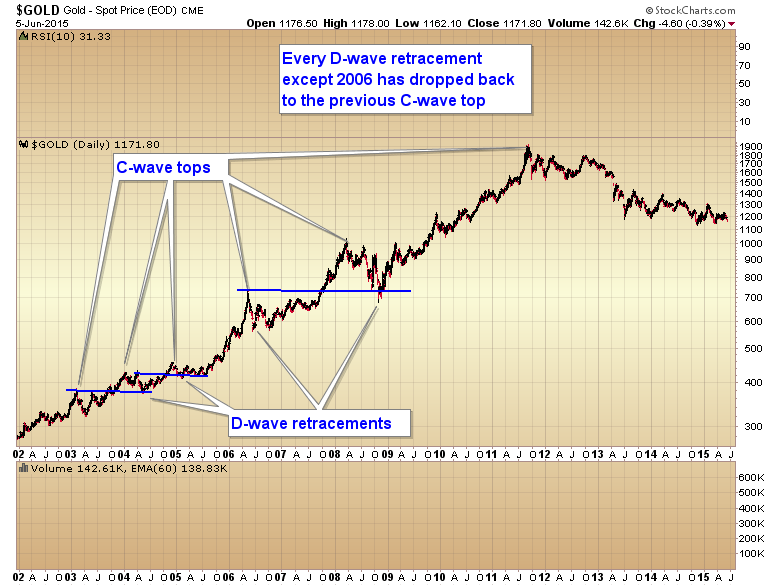 So until gold tests the $1000-$1050 level I think it’s premature to call the bottom. As a matter of fact I think over the next several months gold is going to drop down into its final 8 year cycle low, and that move down could be extremely painful. That is the problem with trying to pick a bottom in a bear market. If you are too early the drawdown into that final low can be extremely damaging both financially and emotionally. Let me explain.

Let’s say you are long gold and miners right now and I am correct and gold still has a move to $1000 or lower before the bear market is over. It would mean you are going to suffer a 20% or larger decline in your metals positions over the next several months. If you are heavily into mining stocks this could be a 30 to 40% drawdown. Needless to say almost no one can survive that kind of loss on their portfolio. It’s easy to imagine yourself holding through one of these multiyear cycle lows before it happens, but I can guarantee you almost no one can actually do it in real time. What happens emotionally is that when gold gets to $1000 the magnitude of the decline will make it look like gold is going to 800, 700 or 600. You may think that you can hold on but in real time it’s going to look like the losses are never going to end .In real-time $1000 gold won’t look like a bottom so you won’t be able to hang on.

But here’s what really happens to every trader trying to hold through a drawdown of that magnitude. At some point your emotions just cannot take the day after day of losses and you panic and sell. At that point you are so emotionally drained by the magnitude of your losses and shellshocked by the force of the decline that it becomes impossible to reenter the market. So when we do get the bottom, whether it comes at $1000, or $950, or $900, you are just too emotionally damaged to pull the trigger again. Unfortunately that’s exactly what you need to do. You need to buy at the bottom of the bear market. Buying at the bottom of a bear market is when millionaires and billionaires are made. Sometime in the next several months we are going to get that once-in-a-lifetime opportunity. In order to seize it you need to avoid  the drawdown and emotional damage from the final move down into the bear market bottom.

I suspect there are many of you out there who have been holding onto positions listening to the multitude of gold gurus telling you that any day now gold is going to turn and rocket to the moon. Yes gold will eventually turn and head much much higher. Personally I think it’s going to at least $5000. However, if you don’t avoid the last leg down in the bear market there’s no way you will be able to hold on for the ride back up. So as painful as it would be to take your loss now, I think it’s better to do so and get on the sidelines so you can avoid that final massacre into the bear market bottom. The all-out panic as gold moves into a major eight-year cycle low can be extremely damaging. The only way to buy at a bear market bottom is if you are in cash waiting for it. If you try to ride it out and get knocked off halfway down, you will simply be too shellshocked to pull the trigger at the bottom. 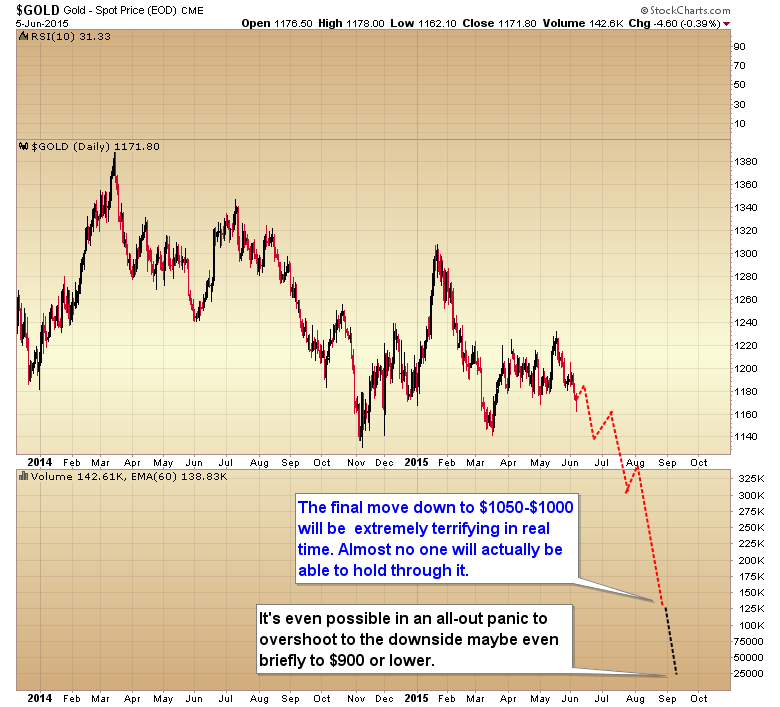 I expect this would also correspond with the stock market moving down into its seven-year cycle low, which could unfold as a 1987 type crash event.

With the move below $1168 on Friday, gold has completed both of the requirements indicating that the intermediate cycle has topped. It has broken its intermediate trend line, and signaled a failed daily cycle (started a pattern of lower lows and lower highs). 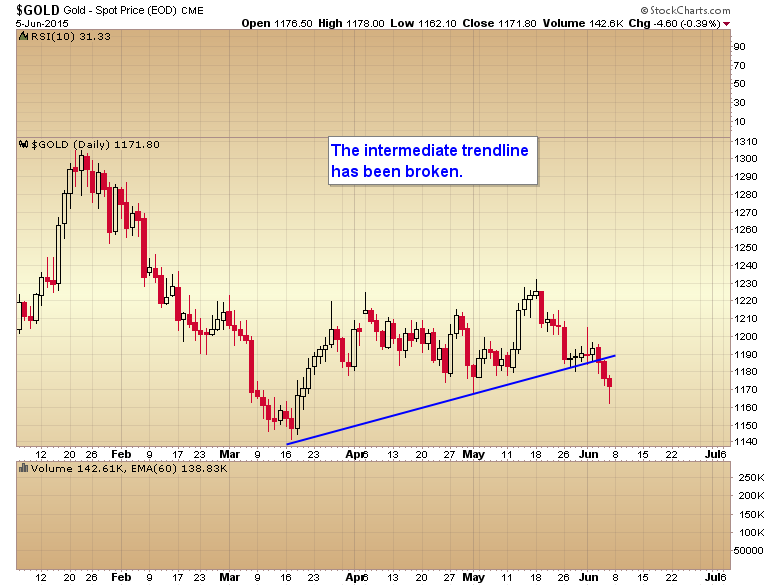 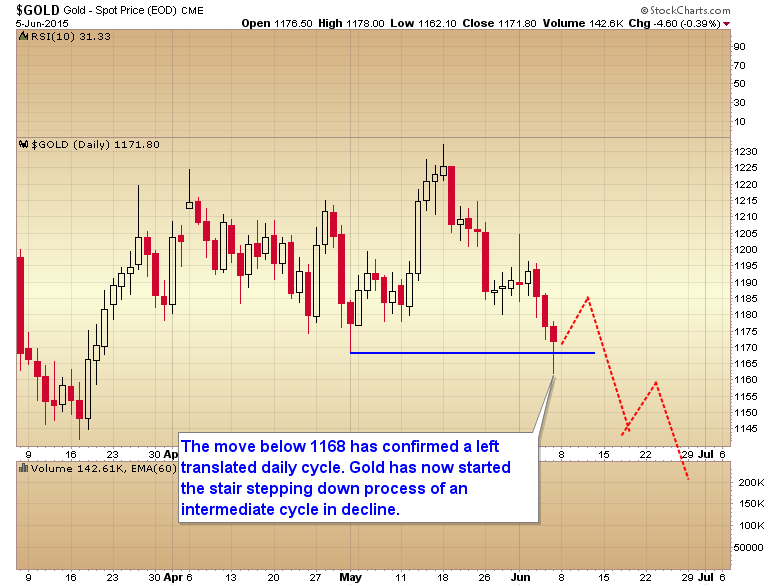 As intermediate cycles don’t typically bottom until week 20-25 (and a few have even stretched to 30 weeks or longer) there is still a lot of time left before gold is due to form that final intermediate, and I suspect eight-year cycle low. A lot of damage can be done in 10 to 15 weeks, and I suspect a lot of damage will be done, culminating in a complete panic phase down into the eight-year cycle low before the intermediate cycle bottoms. 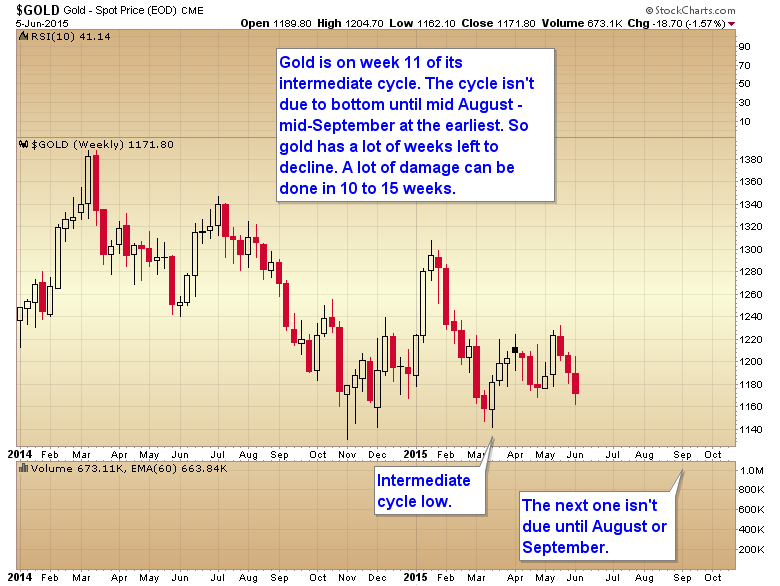 In order to avoid getting caught in that debacle I strongly suggest gold bugs get on the sidelines now and stay there for the next several months until we reach that phase where gold just drops day after day and the losses become so great that it’s virtually unimaginable that this could be happening. When you see that kind of absolute panic start to unfold that’s the point where you need to put your finger on the trigger and be ready to buy in preparation for what should be the start of the final phase of the greatest bull market in history.

Look for part II of surviving the last few months of the bear market on Tuesday.

36 thoughts on “Gold: SURVIVING THE LAST FEW MONTHS OF THE BEAR MARKET”