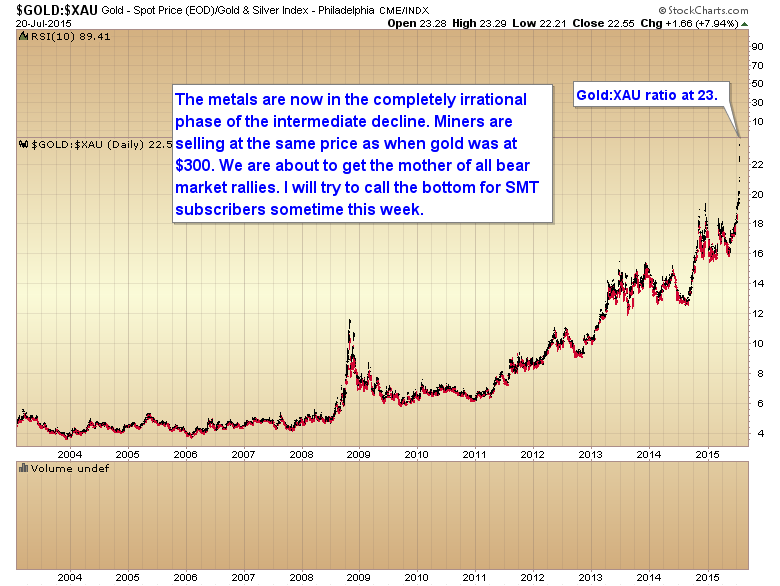 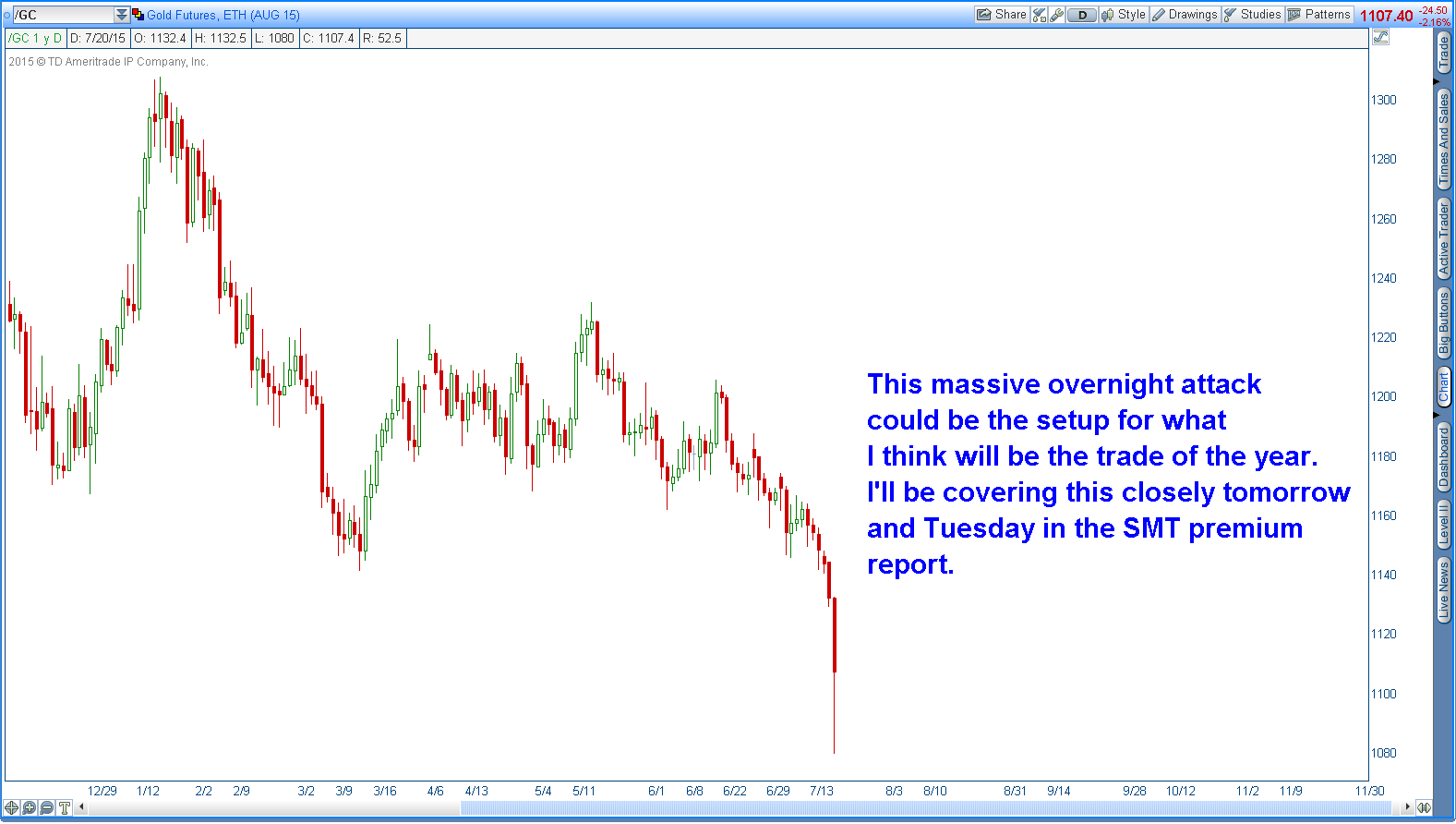 I’m of the opinion that we are about to get the best trade opportunity of the year in the metals sector. Not a final bear market low, but an exceptionally powerful bear market rally.

See why in the weekend report.

Over the past few weeks I was hoping the Fed would stay out of the market and allow a natural intermediate degree correction. Unfortunately with the Humphrey Hawkins speech this week and an FOMC meeting at the end of the month it was not to be. Instead the Fed aggressively intervened last week to prevent the market from continuing down ahead Yellens speech to Congress. This has been a familiar pattern for the last several years. Obviously it’s much easier to handle Congress if the markets are rising and everyone is happy with their 401K’s.

However, the Fed has traded some short term gain for massive pain further down the road. By not allowing the market to fully correct into an intermediate degree pullback the Fed has prevented the market from building the energy necessary for a strong breakout and rally higher. Yes the intervention made it easier for Yellen to deal with Congress, but that has come with a price. The price is that stocks will now remain in the same choppy range they’ve been in all year. And come this fall when the yearly cycle low comes due (and probably the 7 year cycle low) we are almost certainly going to experience some kind of crash event. 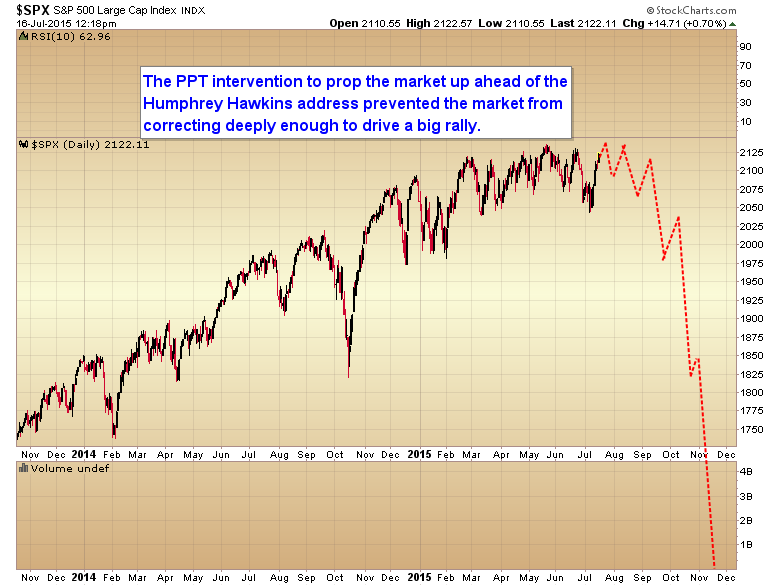 I doubt it will manifest as a one or two day spectacle like it did in 87, but more likely as a several week collapse similar to what happened in China recently. Ultimately I think we will see the S&P retest the breakout at 1550 before the final low is struck.

In the chart below you can get a feel for just how stretched the market is above the 200 week moving average. A move back down to 1550 would only be a 38% Fibonacci retracement. Quite mild actually. But it won’t seem that way because much of the drop will probably occur in the last 2-3 weeks. 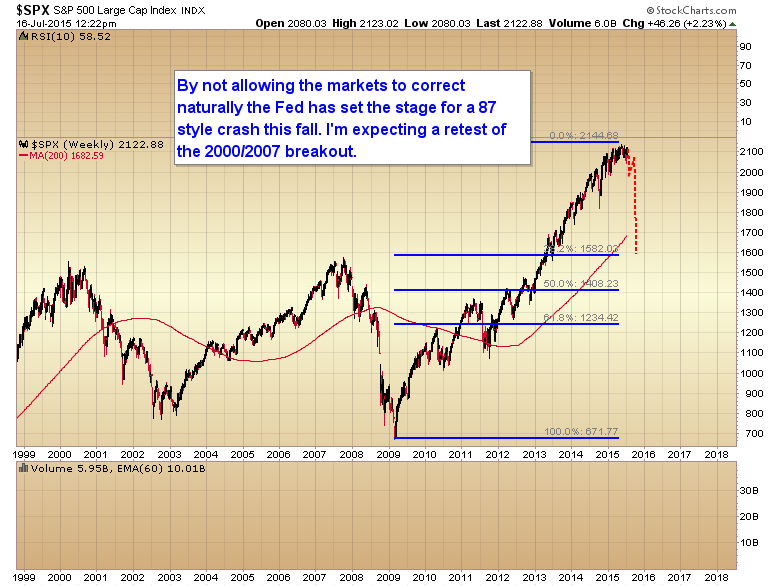 In order to confirm the 7 year cycle low the market has to at least break the 7 year trend line. 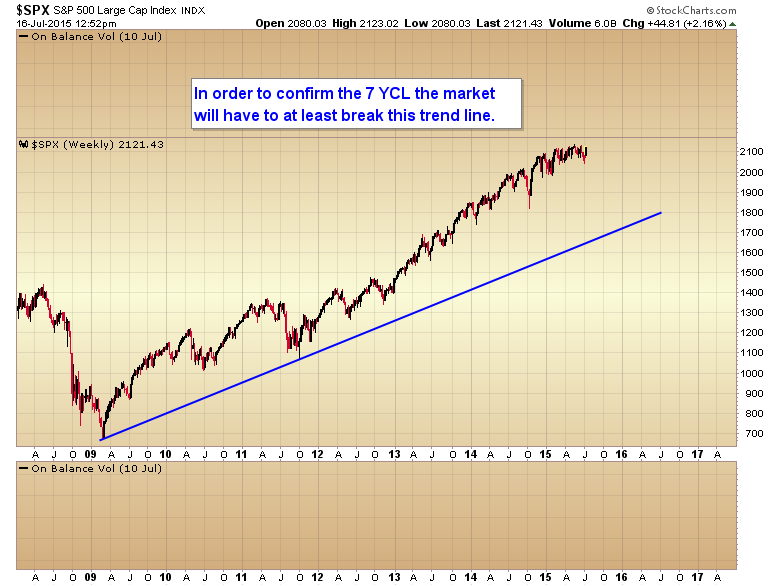 I know this seems virtually impossible at this time. Recency bias does that to traders. Because we haven’t had a serious correction in years we assume it will never happen again. But I assure you it will. Back in 2007 no one could have imagined the market dropping 60%.

Now let me show you some of the subtle warning signs that are appearing.

First off we have a divergence in the advance/decline line and semi’s. This happens at most multi-year cycle tops and specifically at the last two bull market tops. 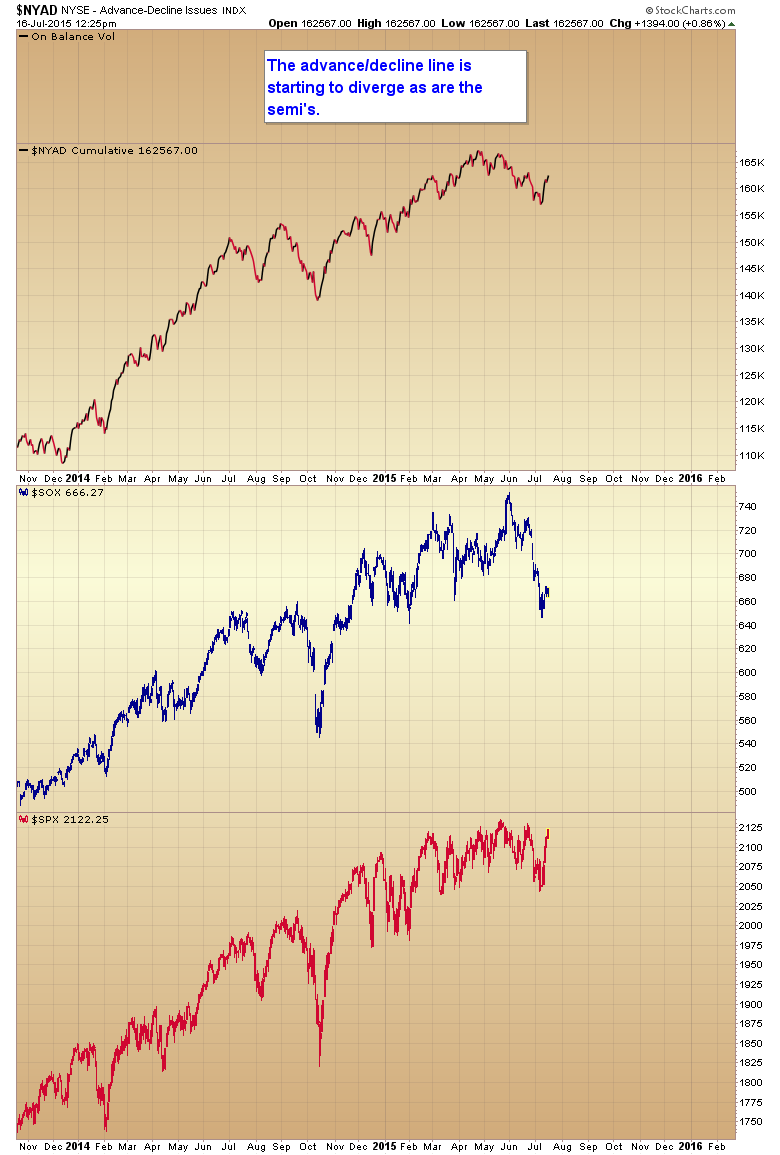 Next we have the weekly money flows diverging sharply as institutions have been slowly exiting the market over the last two years. 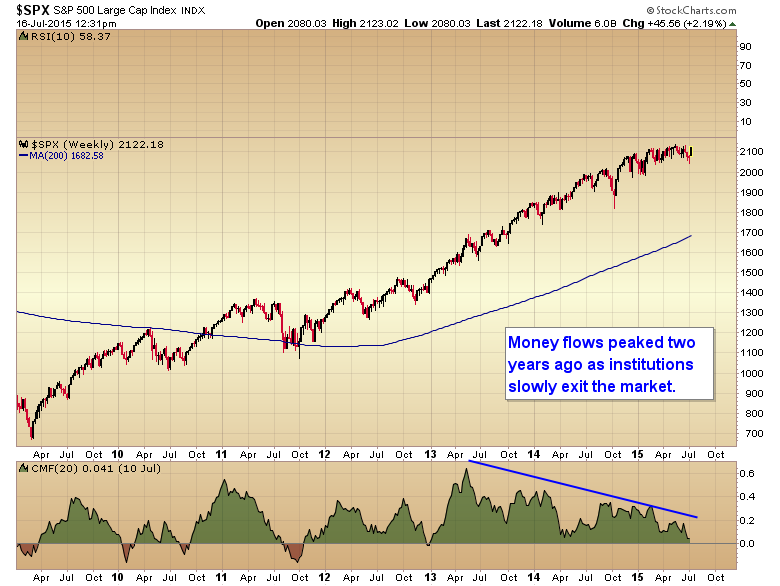 Ever since QE3 ended fewer and fewer stocks in the NYA are holding above their 200 day moving average. 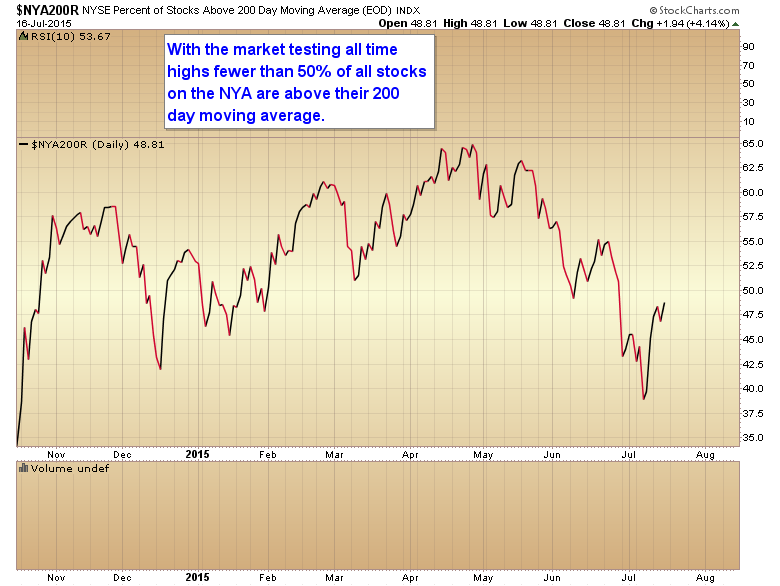 Finally the speculative driver of this bull market, the biotechs, are now stretched quite far above their 200 DMA and due for a severe regression to the mean event. 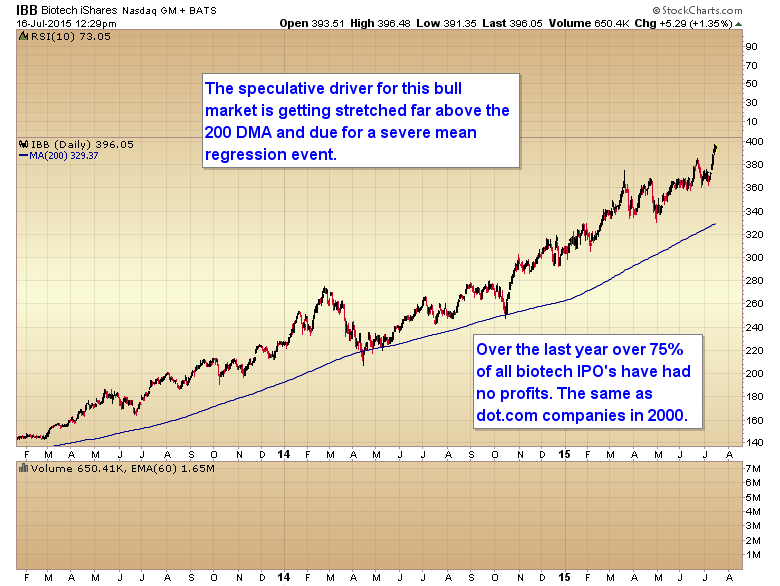 I’m not saying biotech is going to crash tomorrow, Stretched can certainly get even more stretched, but when the crash comes don’t expect biotech to just drop back down to the 200 DMA. They will almost certainly oscillate far below that level. A 50% haircut back to 200 or lower wouldn’t be abnormal for an asset class so obviously overvalued.

Don’t get me wrong, despite what I think will be an extremely vicious correction this fall, I don’t think that will be the end of the bull market. I think a 20-30% crash will panic the Fed and they will start QE4. The correction will just set the stage and clear sentiment for the final bubble phase rally in stocks. Who knows how high the S&P could go during this last irrational phase. S&P 4000 or 5000 isn’t out of the question… 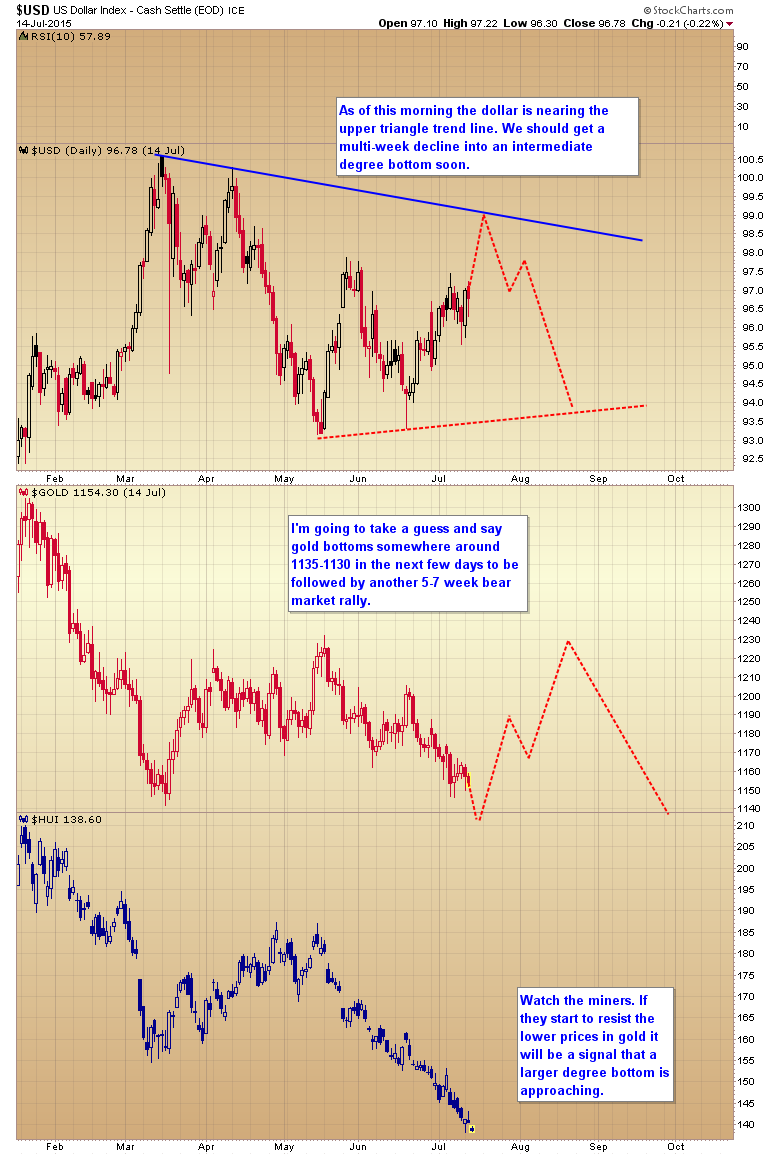 As I noted in the recent portfolio update all of the SMT portfolio’s except currencies are in cash right now. And based in large part on this weeks COT report I’m jettisoning all my previous expectations until I see how this next week plays out. I explain in depth in the weekend report, but in short I think the Fed may have aborted the rest of the move into the intermediate cycle low in the stock market, and there is a possiblity that gold may put in a slightly shortened ICL next week. 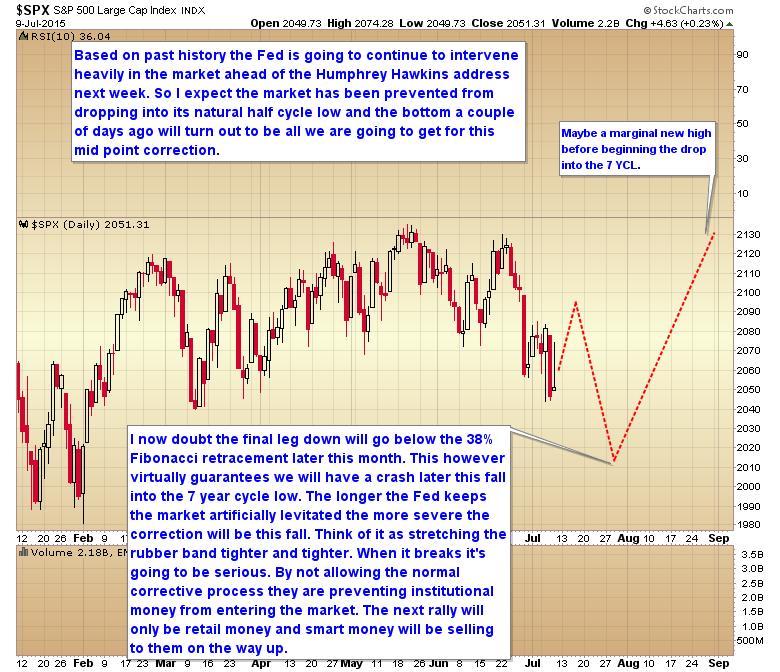 Now that almost all the recent trades have been closed I thought it would be a good time for another portfolio update.

The stock portfolio is up 6% easily outperforming the S&P so far this year.

The energy portfolio is up 5%, also easily outperforming oil which is down so far for the year.

The metals portfolio is up 10% again easily outperforming gold and miners which are all down for the year.

The currency trades are still open so no change there. Still down 5% but if marked to market it would only be down a couple of percent. I’ll wait till I close the trade before updating.

The Quest portfolio is up a little over 200% 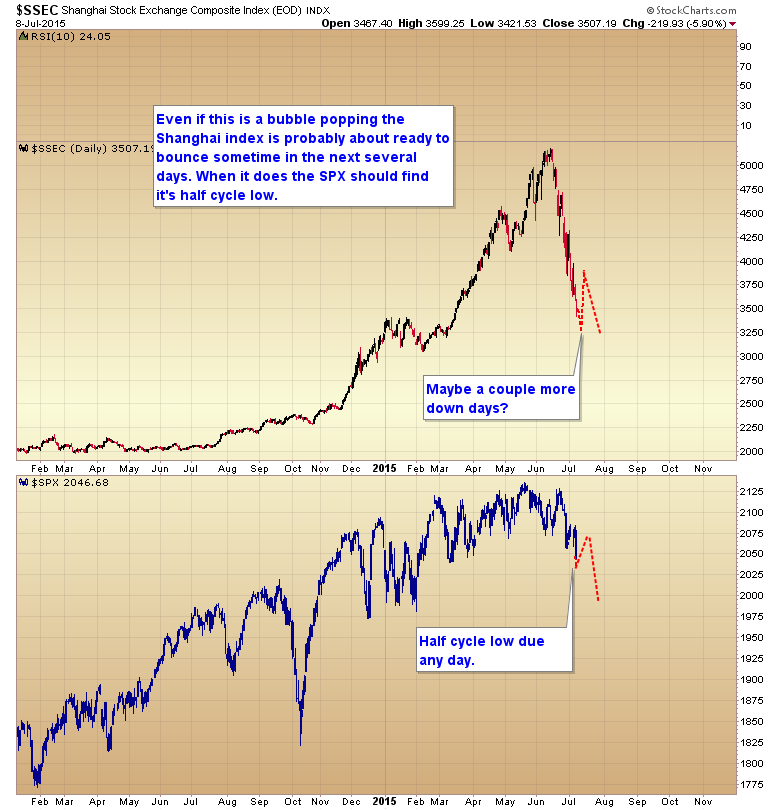