I’ve said all along that if the Fed didn’t get out of the way and let the market correct naturally it would have serious consequences. Well they have not let the market correct naturally. On the contrary ever since QE3 ended there have been more interventions than ever before, and more aggressive. This has kept the market propped up but it’s also built up extreme complacency. We now have a bubble in central bank confidence. When this bubble pops it’s going to unleash a tsunami of selling as everyone runs to the exits all at once.

Based on the previous daily cycle low having occurred 26 days ago, the next cycle low will come due sometime between the first week of September and the FOMC meeting on September 17th. So as unlikely as it seems right now there is a scenario that could generate that move down into the 7 YCL over the next 3-4 weeks.

I’m of the opinion that tomorrow is likely to be a key day. We’ve already seen two interventions fail in the last week. If the market breaks hard to the downside tomorrow then I doubt there will be anything the Fed can do to stop the train at that point. If the market drops hard tomorrow or Thursday, then traders will start to lose confidence in the Fed and the run to the exits will begin. 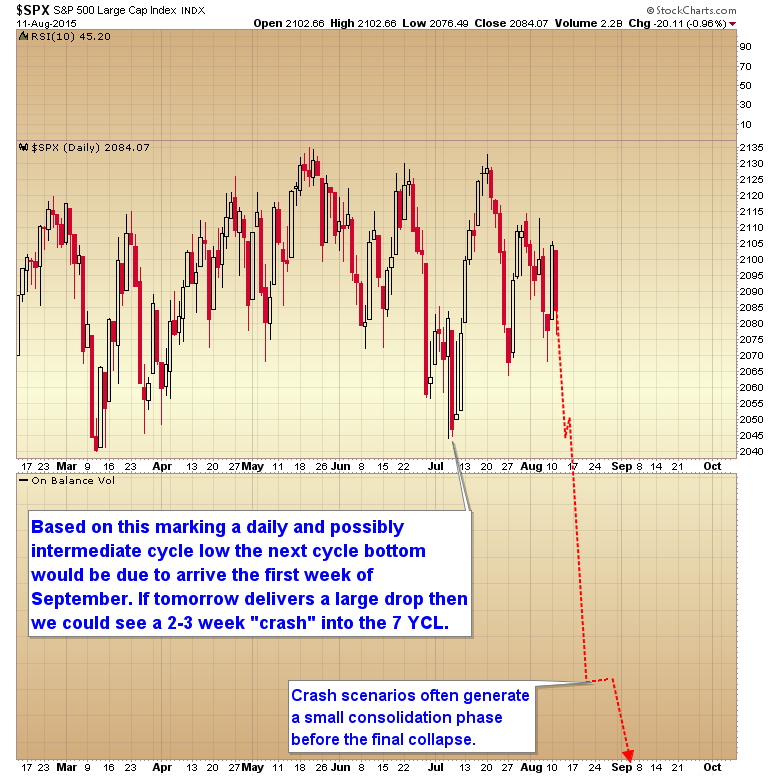 Keep in mind that in order to confirm a 7 YCL the market has to drop far enough to break this multi-year trend line. The following chart gives you an idea of the magnitude of the fall that is due. Stocks could conceivably lose three years of gains over the next 3-4 weeks. 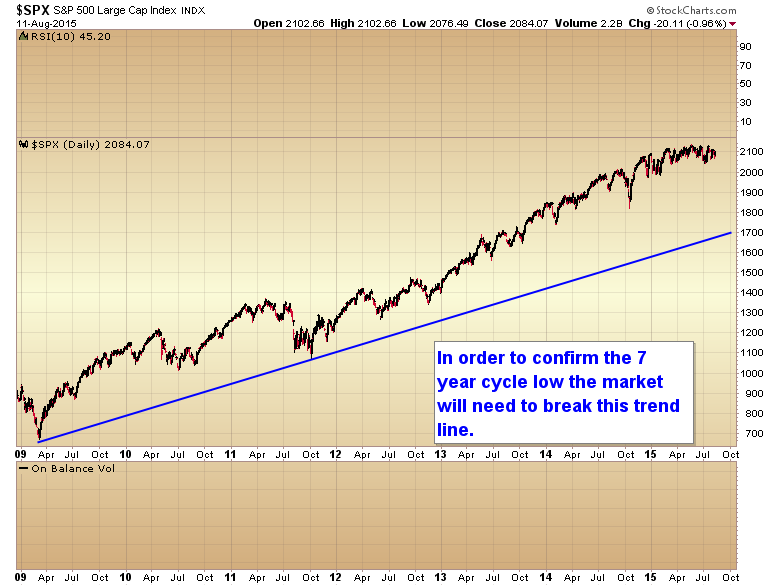 If this scenario unfolds over the next 3-4 weeks then not only will the Fed not raise rates, but they will be forced to initiate QE4 to halt the crash. As soon as QE4 begins then the bull market in the dollar will be over, and the consolidation that would otherwise be destined to breakout to the upside will instead break lower and the next bear market in the dollar will begin. 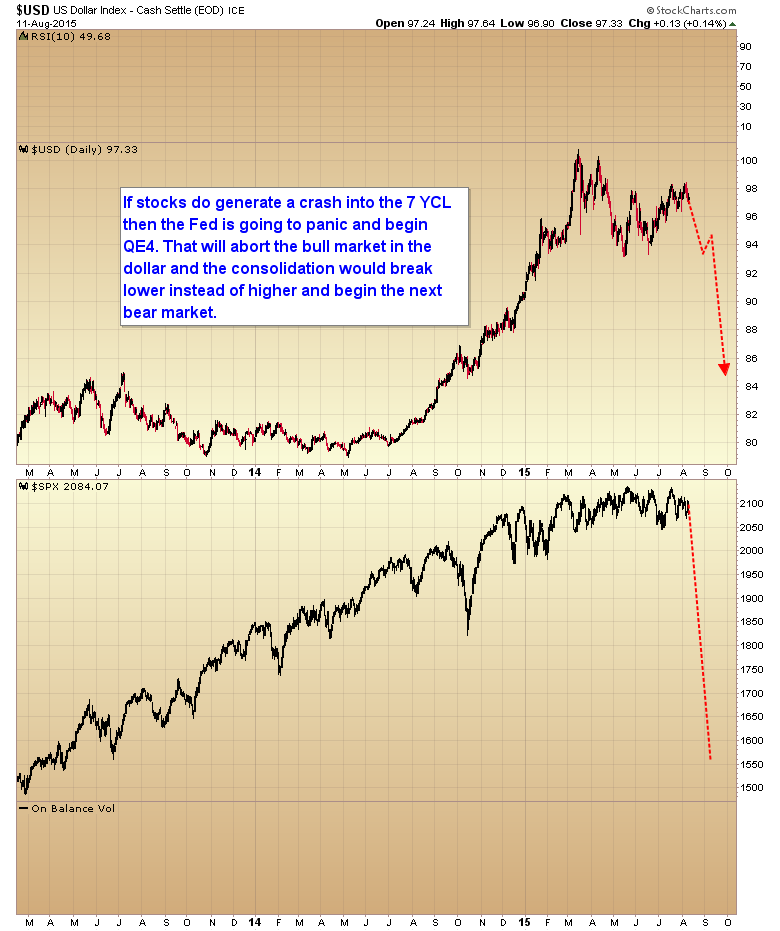 If this plays out then gold isn’t just starting another bear market rally. Instead it is anticipating QE4 and will have already formed the final bear market bottom a couple of weeks earlier. 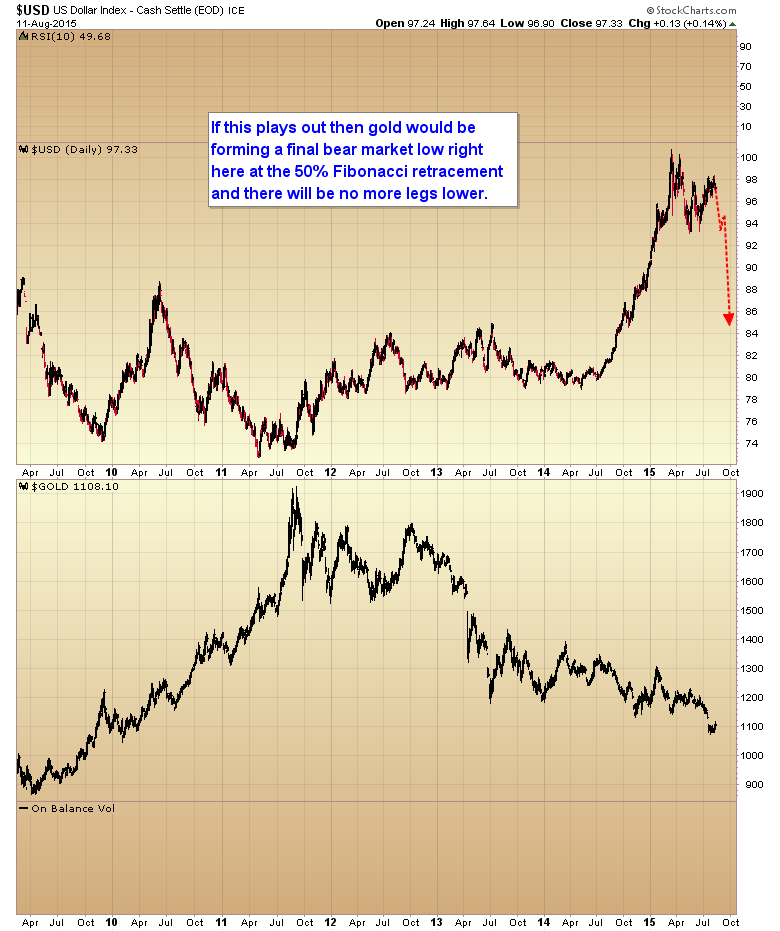 Either way, gold has begun an intermediate degree rally that should last at least a month and a half to two months. And if stocks deliver the move down into the 7 YCL then gold is starting a new bull market. Whichever scenario is in play, now is the beginning of a trade able rally in the metals sector and the longer one waits the harder it’s going to be to chase

…and you might be getting in at the very bottom of the bear market depending on what happens to the stock market over the next several weeks.