Gold and miners made an unexpected move today. When conditions change it’s best to adapt to them quickly.

See the afternoon update in the premium newsletter for details. 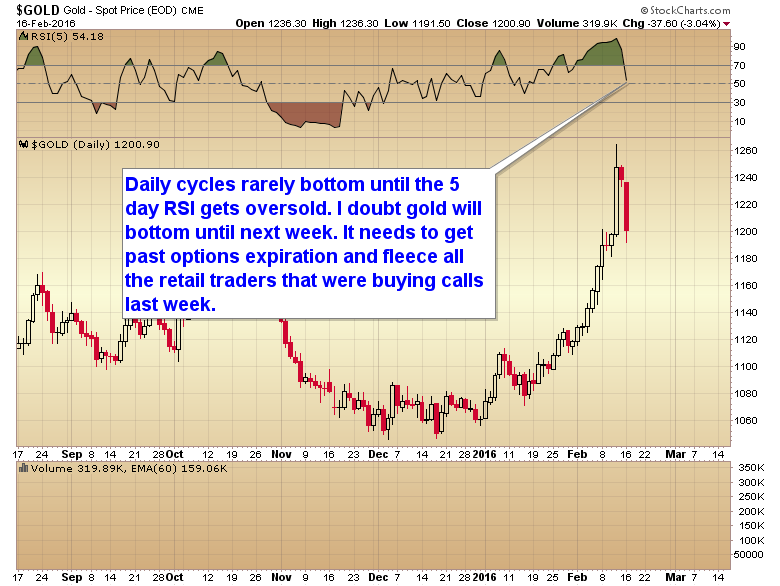 Trades need to keep an open mind right now. This can go either way depending on what happens in the stock market. Gold could have another big leg up if stocks roll over and finish the 7 YCL, or gold could enter a volatile trading range if the powers that be have succeeded in halting the 7 YCL again.

I’m pretty sure the PPT has halted the rest of the drop into the 7 year cycle low. This probably means gold enters a trading range for the next couple of months, oil has bottomed and will likely rally to $40, and the dollar has likely completed an intermediate degree correction.

Just like I warned the PPT came in Friday to paint the weekly charts with a reversal. This has the potential to delay the 7 YCL again. If so then it is going to have ramifications for oil, currencies and gold.

I’ll go over this in depth in the weekend report, but for those of you who have ridden this move up in gold now might be an opportune time to place some hedges as gold will be due for a drop down into a daily cycle low soon, maybe starting next week.

For those of you asking about the Quest, send me an email and I’ll give you the details.

The goal is to reach $100,000. If successful we would have risked a very small amount of money but gathered a very big reward. If you want to play with leverage this is how you do it. You never, never, never trade your retirement funds with leverage.

A couple of months ago I did a video on the gold manipulation explaining how and why it was done. I said at the time that when the market finally broke the manipulation that gold would surge violently higher, not like a normal bear market would end with many months of sideways trading and complete apathy.

I also said that the perma bear analysts (you know who they are) who have for years now heaped one derogatory comment after another at the bulls trying to expose the manipulation would ultimately be exposed as the frauds they were. Folks no one can see the future, not man nor computer. These people are nothing more than trend followers and just like I predicted they would miss the turn when it came because they had bought into the nonsense that gold was trading naturally.

Well with gold surging thorugh $1200 and now trading at $1240 I think it’s time for these frauds to eat some cold humble pie and crawl back under their rock. The market is doing exactly what I said it would do for exactly the reason I said it would do it.