Here are the cons to shorting the stock market:

The Fed and the PPT have a printing press. They have access to unlimited amounts of money, and they are extremely motivated in keeping the stock market propped up.

Most of the world is experiencing negative interest rates. Money is flowing out of those bond markets and it has to land on something.

The combined contracts in the COT index funds are net positive 29 billion. The biggest, smartest, and best capitalized traders in the world are bullish, and not just mildly bullish, they are heavily bullish. What do they know that Joe Sixpack retail trader armed with his stockscharts subscription doesn’t? 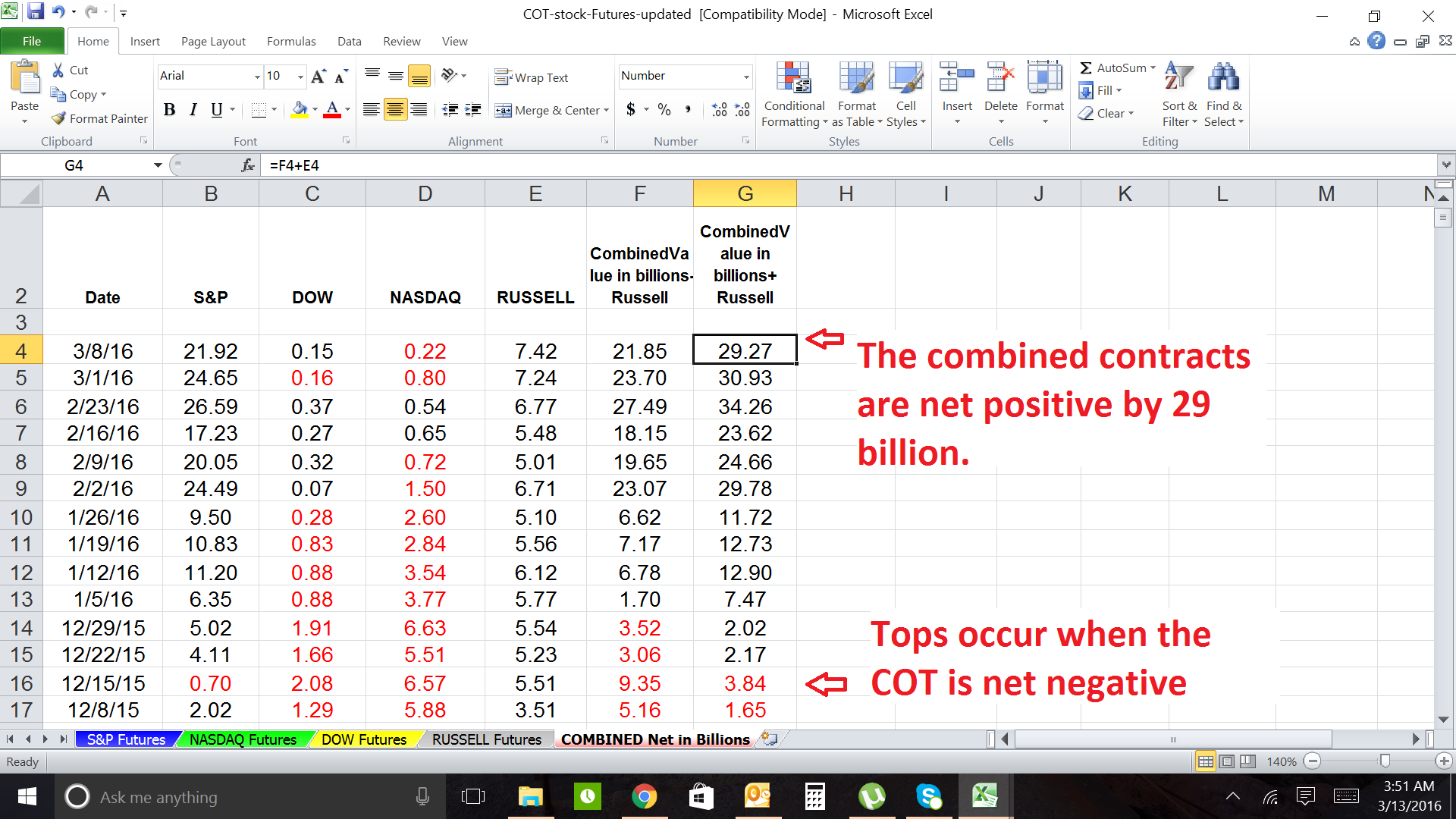 The larger intermediate cycle is only 4 weeks old and barely half way through the first daily cycle. There is virtually no scenario where an intermediate cycle tops this early other than a potential financial earthquake in the immediate future and that clearly isn’t impending. As a matter of fact, the one sector that could have triggered a financial panic was energy but that has reversed aggressively over the past 4 weeks. So that bomb is being quickly defused. 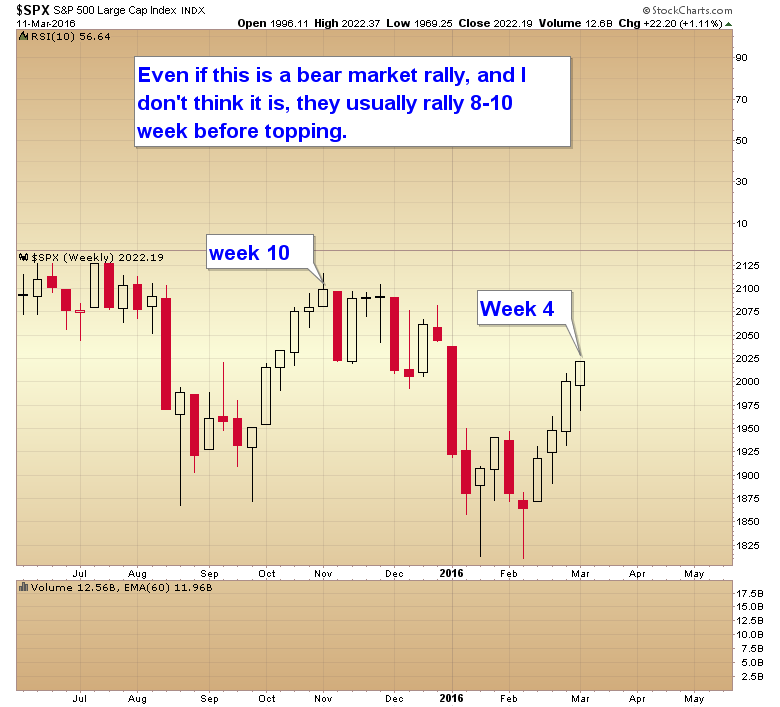 Stocks tend to rally the strongest when the dollar is rising. The dollar is going to be due for an intermediate bottom next week followed by a multi-week rally. 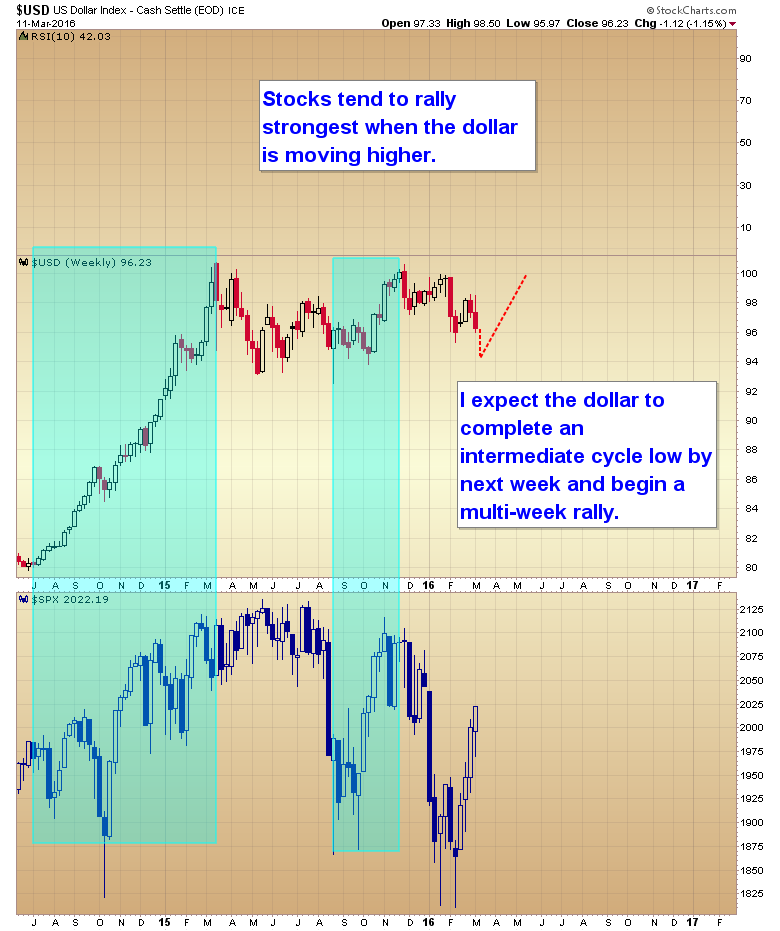 We know that a 7 year cycle low is due, actually it’s overdue, and the rally out of the recent bottom has been one of the most powerful in terms of breadth in the last 60 years. That’s exactly what I would expect to see as the market comes out of a 7 YCL.

Sentiment isn’t even vaguely close to levels that would trigger an intermediate top, not even if this were a bear market rally.

The intermediate score is dead neutral. That’s not the level where we are likely to run out of buyers. 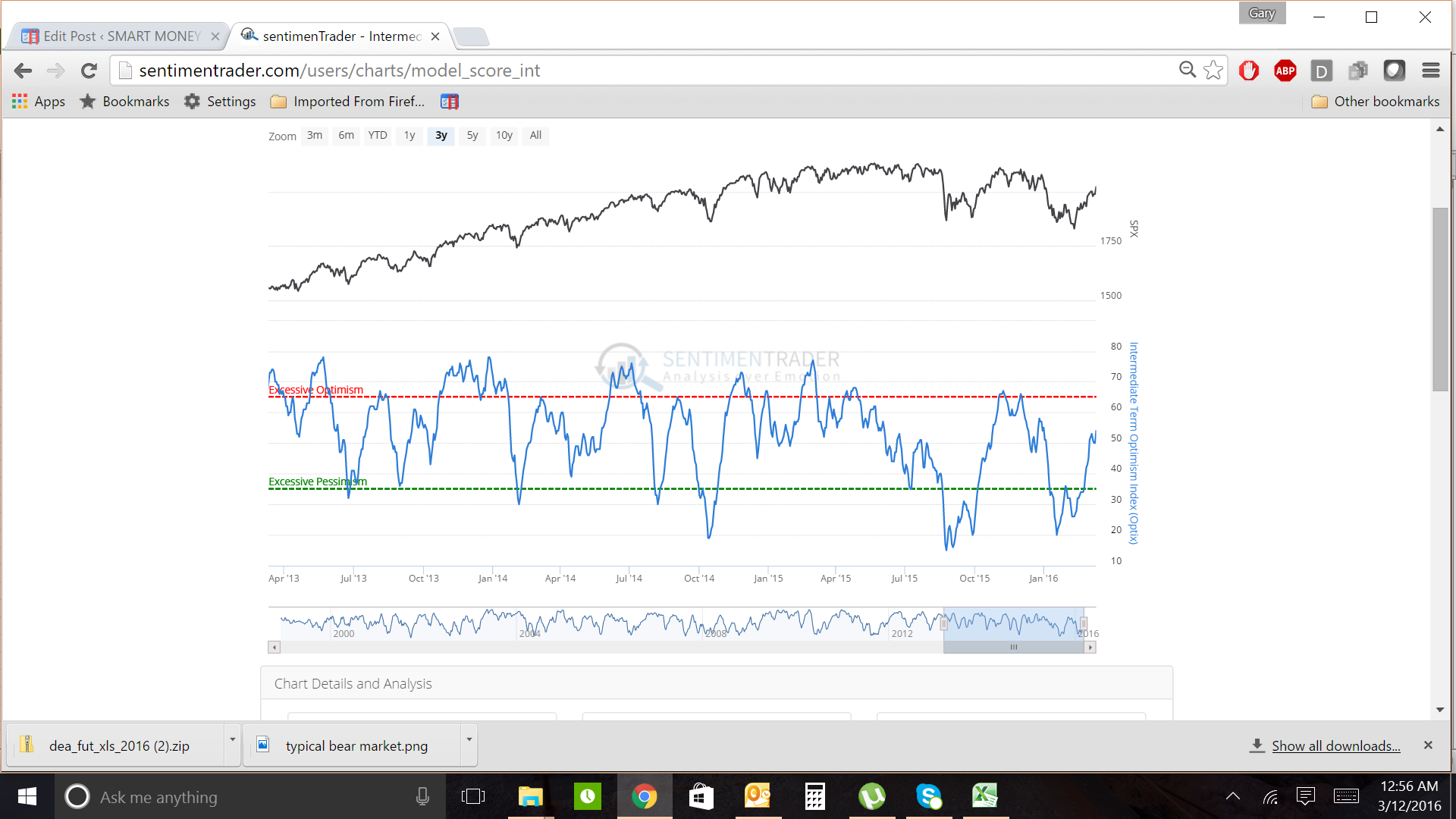 The most clueless traders, dumb money retail, are still buying puts hand over fist. Until these emotional traders start buying lots of calls it’s unlikely that we are anywhere close to this intermediate cycle topping. 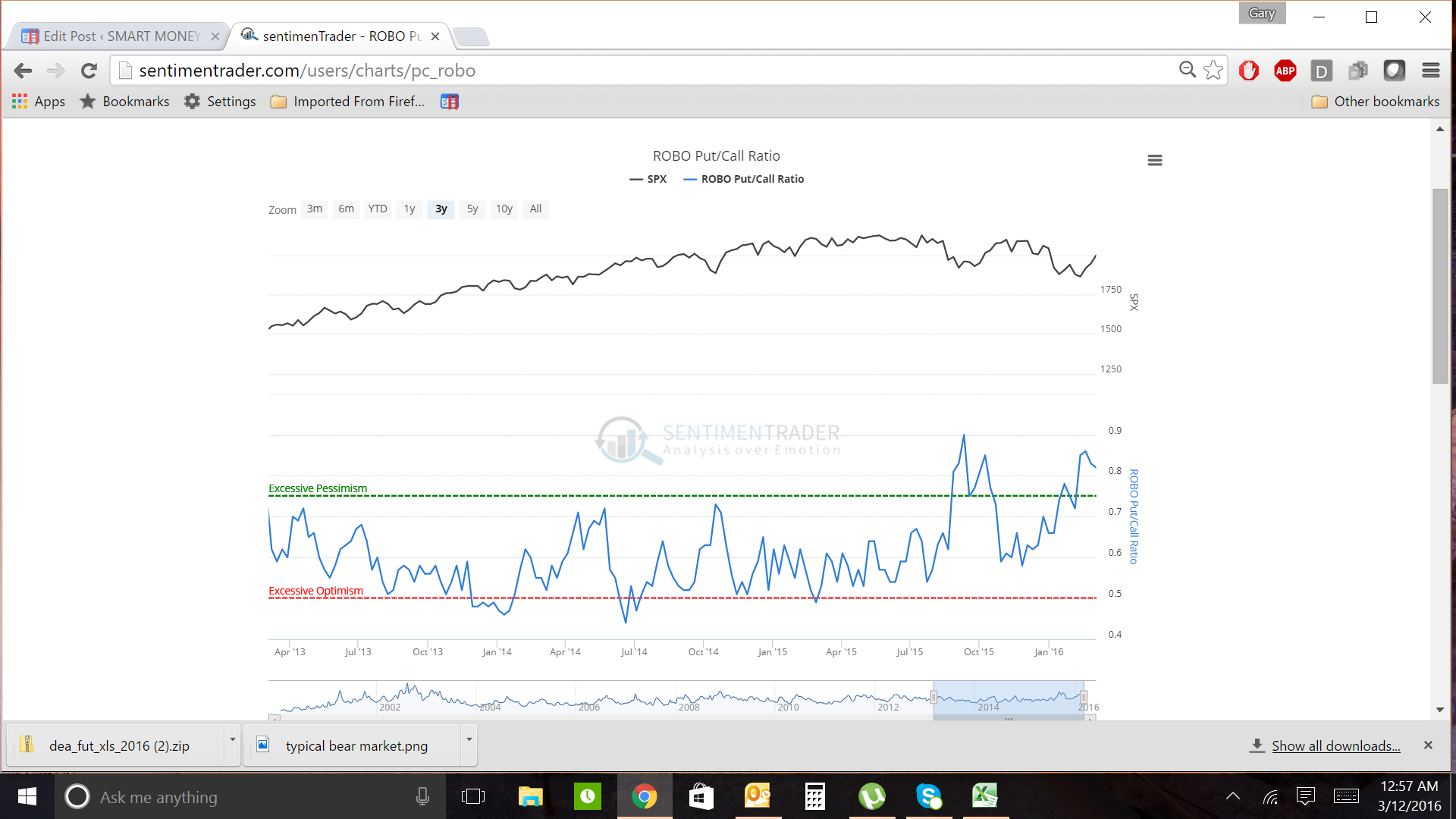 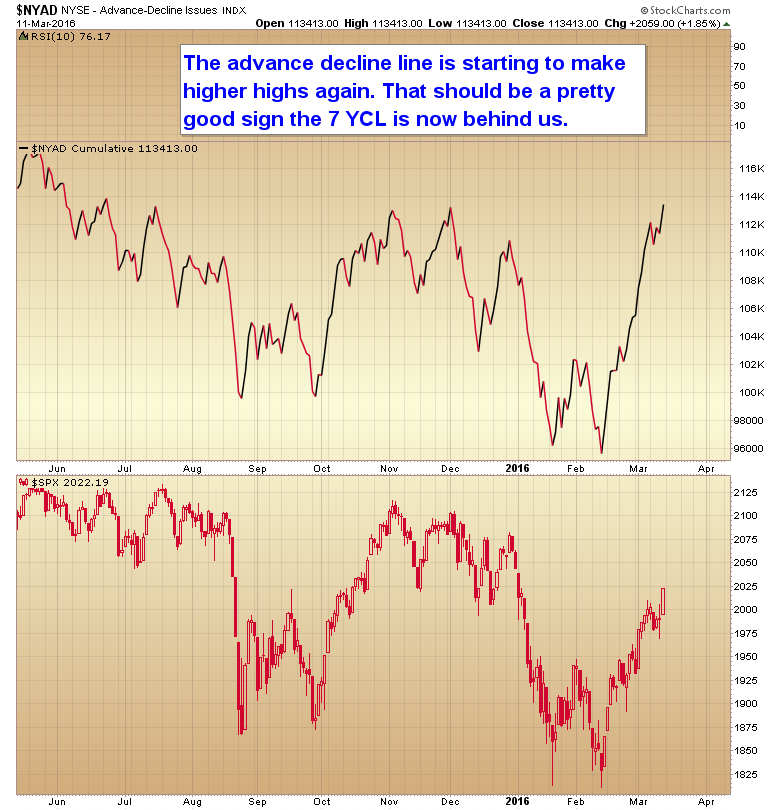 And finally the PPT has murdered what should have been a half cycle low, and in the process driven the S&P and Dow through resistance, and back above the 200 DMA. 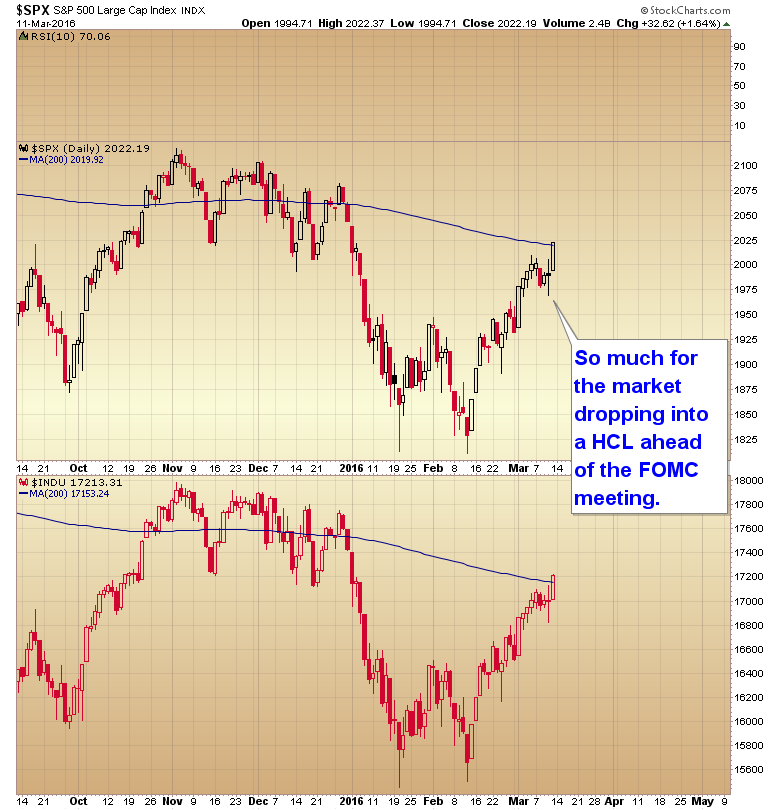 So if you are trying to short this market, I have to ask: What the hell are you thinking? I’m about 85% convinced the 7 YCL is complete and we are at the very beginning of the bubble phase of this bull market. This isn’t the time to be shorting. This is time to get in early and ride that bubble phase to some really big gains over the next couple of years.

For 16 years the pattern hasn’t changed. The Fed prints too much money and keeps interest rates too low too long. It causes a bubble. The bubble pops. Markets crash. Then we start all over again.

The time to short will be after the next bubble forms. Be patient. Wait for stocks to go parabolic. Wait till you see the public piling into an asset class like they were in tech in 2000, and housing in 2007, and then short the market.

64 thoughts on “IT’S TOO EARLY TO SHORT STOCKS”